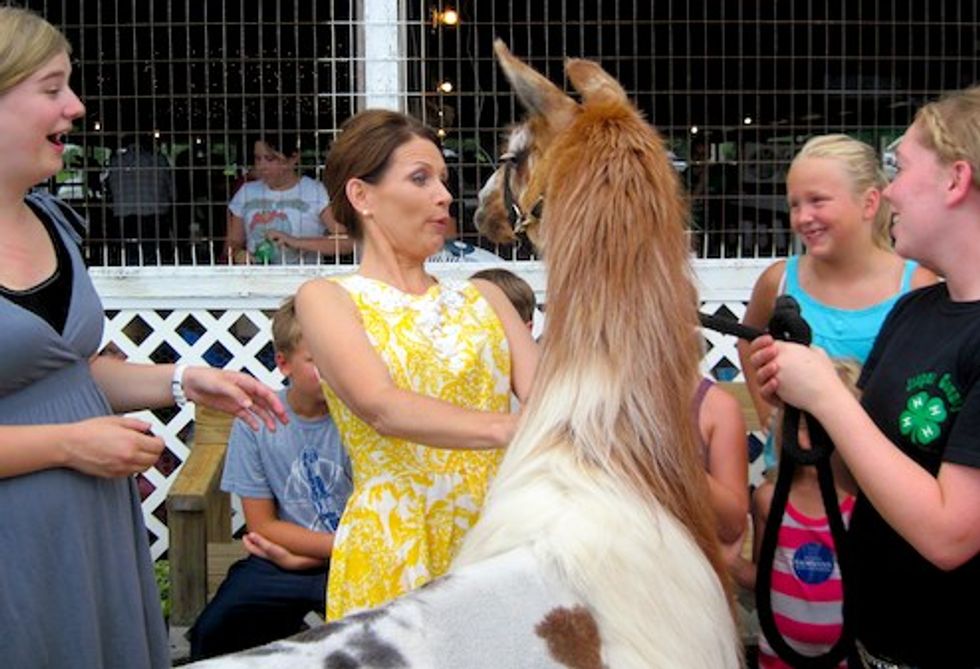 Look, would all you lamepants lamers in the lamestream media just stop obsessing about that dumb plane with the Dutchmen on it, and those dumb brown children, and pay attention to something important, likewhether Michele Bachmann will run for president again on her popular "What About Me?" platform. Real Clear Politics actually asked old Crazy Eyes whether she planned another run, which she took as a signal to whine about how no one is talking about her possible presidential aspirations:

“The only thing that the media has speculated on is that it’s going to be various men that are running ... They haven’t speculated, for instance, that I’m going to run. What if I decide to run? And there’s a chance I could run.”

Yeah, guys. She really might run. She's not saying she's gonna run for sure, but she might. Really. A run for president. By 2012 Presidential Candidate Michele Bachman. Who ran for president once, and may again. Why aren't people talking about that, huh? It's because you all hate conservative women, you haters.

Bachmann also said that she thinks that all the "practice" she got in 2012 would give her a real advantage over candidates who, unlike her, did not run for president in 2012 but are considering a run in 2016. These are the people she likes to think of as "Michele Bachmann Wannabes," if you must know. How serious is she about a possible 2016 run, which people should definitely not dismiss? Well just look at this impressive deployment of clichés:

“I haven’t made a decision one way or another if I’m going to run again, but I think the organization is probably the key,” she told RCP. “To have an organization and people who surround you who are loyal, who are highly competent, who know how to be able to run the ball down the field in state after state."

Bachmann then put on a day-glo orange tee shirt emblazoned with "LOOK AT ME!" in 7-inch letters, wore a Drudge Siren like a hat, and sent several tweets reading only, "Guess what I'm thinking of doing in 2016! No, Guess!" And then she hid in a bathroom for four hours when someone asked her whether she really thinks vaccines cause Down Syndrome.