Michele Bachmann Gave You Your $2 Gas. You're Welcome, America! 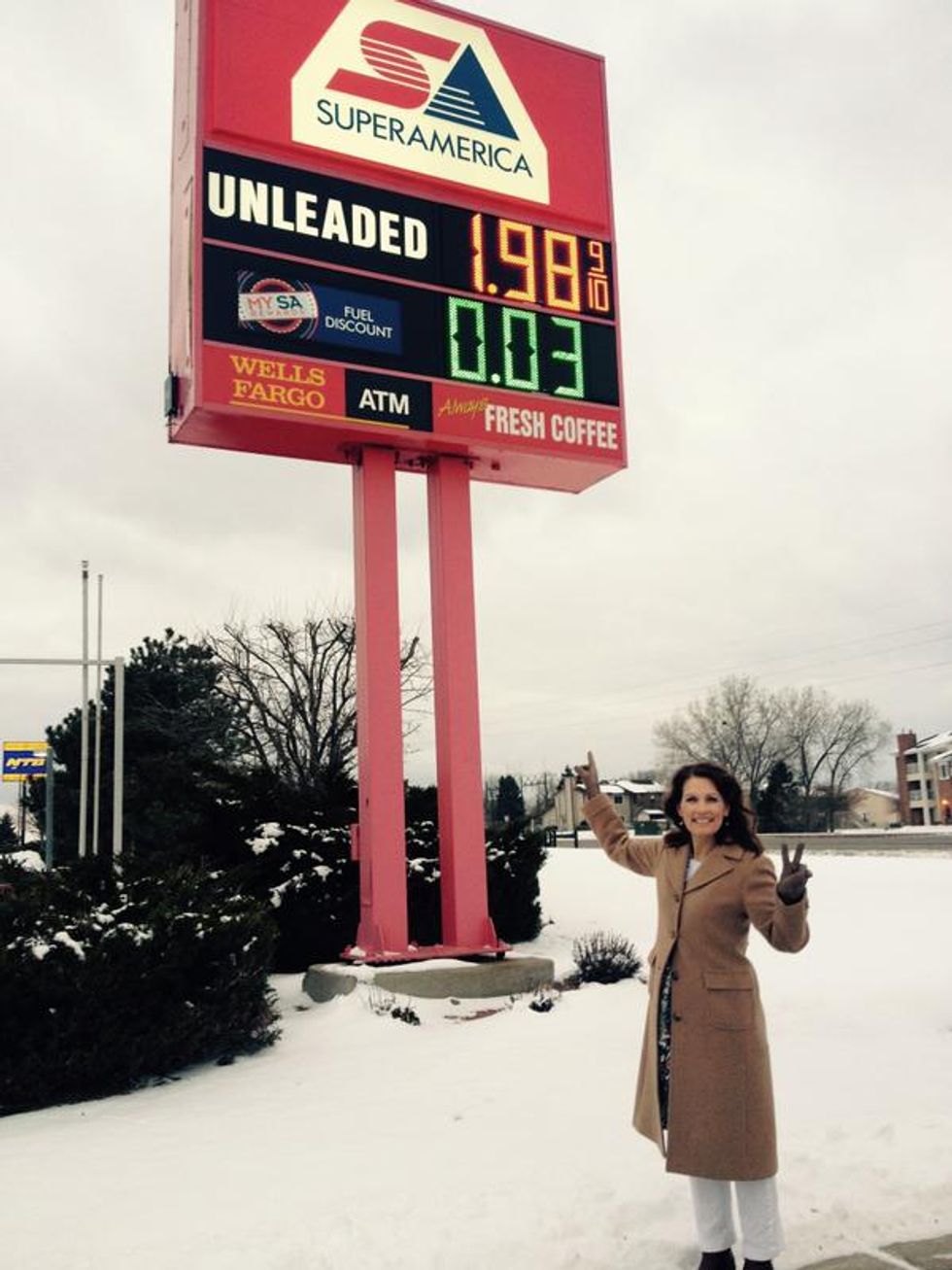 Retiring Congressdipshit Michele Bachmann has been doing a peculiar version of the Minnesota Long Goodbye, except instead of the usual arrangement, where a host follows a departing guest out to the car asking if they're really sure they don't want to take a little hot dish home with them, Ms. Bachmann has it a little backwards. [contextly_sidebar id="2Yb5fpMnk2AZN6PizJHyvpDQiZ5ECVtb"]Having given a farewell speech and received a loving farewell tongue-bath from WND, and packed up the U-Haul with all her Furry paraphernalia, she now keeps coming back from her idling getaway car to knock on the door and ask us if maybe we'd like to make her another pot of coffee and look at slides from her trip to Bemidji all night.

Case in point: this tweet from last Friday, in which she appears to be pretty darned pleased with how she brought down gas prices, just like she promised in August 2011:

“The day that the president became president gasoline was $1.79 a gallon. Look at what it is today,” she said at an event in Greenville, South Carolina. “Under President Bachmann, you will see gasoline come down below $2 a gallon again. That will happen.”

Also, since her $2-a-gallon pledge was mocked by some crazies at the time, her pals at WND ran a piece explaining that now she's gotten the last laugh, and everyone who thought it could never happen should apologize for ever having mocked her for saying that $2 gas was UNPOSSIBLE. [contextly_sidebar id="o7LmIyXYv56K6s74SqxKEsW02dBNO14U"]It clearly is possible so Michele Bachmann wins! Missing from the WND piece, of course, was any explanation of how Michele Bachmann brought this about, but we suppose maybe that's nitpicking. But since Bachmann was never actually very specific about how she planned to bring down oil prices, how can anyone say that today's lower prices aren't due to the nation doing exactly what she would have planned? Can you say for sure that her plan to drill the Everglades for oil that isn't there didn't pay off? That's just logic, people. Her steadfast policy of sitting back and doing nothing has definitely paid off. [contextly_sidebar id="BSXzd9YP10y6FGM67P8tz0K28s9hzFb1"]

Needless to say, all of this happened in spite of Barack Obama, who refused to build the Keystone XL pipeline, drill in the Alaska National Wildlife Refuge, and who won't even let people run their cars on clean coal. Also, too, former Energy Secretary Stephen Chu said, before Obama became president and appointed him to that post, that gas prices should be more like they are in Europe, so no, Barry does not get any credit because he is a socialist. It is a basic principle of economics: Rising gas prices are Obama's fault, and lower gas prices are the magic of the market (and Obama's fault). [contextly_sidebar id="fYesntDVJcLpPXu824gxpLqpuQZUVeAc"]

On the other hand, if in the next couple of weeks Congress passes a Constitutional amendment banning same-sex marriage, and all 11 million illegal immigrants get deported, then sure, Bachmann can definitely take a bow. We just hope she'll do it somewhere other than on our front step.