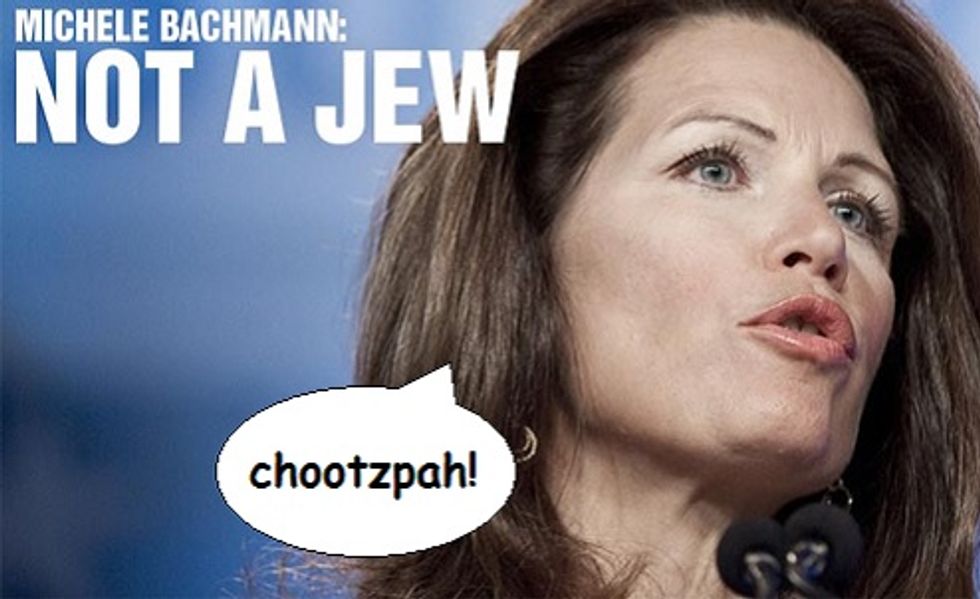 Like a lot of your rightwing fundagelicals, Michele Bachmann is a big believer in the old Chick tract"Support Your Local Jew," so she knows that the most important country in the world, next to maybe America, is Israel, because that's where Jesus will come to end the world. And so if Israel is unhappy about an American policy, that's not just international politics, that's an affront to God. Which explains why ol' Crazy Eyes is especially ticked at American Jews for not recognizing the self-evident truth that Barack Obama is bad for the Jews. You see, Obama went and reached a preliminary nuclear deal with Iran, and then he went and manage to convince Congress not to vote for any new sanctions on Iran while negotiators try to reach a permanent deal. This did not sit well with Michele Bachmann, protector of Israel -- in fact, it's a chaleria that so many Jews voted for the gonif.

And so she shared her feelings with another Christian who loves Israel more than lousy American Jews do, the Family Research Council's Tony Perkins, telling him all about how the Chosen People chose the wrong person:

The Jewish community gave him their votes, their support, their financial support and as recently as last week, forty-eight Jewish donors who are big contributors to the president wrote a letter to the Democrat [sic] senators in the US Senate to tell them to not advance sanctions against Iran. This is clearly against Israel’s best interest. What has been shocking has been seeing and observing Jewish organizations who it appears have made it their priority to support the political priority and the political ambitions of the president over the best interests of Israel. They sold out Israel.

Jews can be kind of dumb that way, failing to recognize for themselves that the Obama administration is full of secret Muslims. What's worse, Obama is actually "threatening Israel" by supporting a two0-state approach to Palestinian-Israeli peace talks, which absolutely no one in Israel supports, except for the majority of Israelis. But that's only because they don't understand the important role they are destined to play in the End Times -- 2/3 of them will be wiped out, and then when Jesus comes back the survivors will convert, yay!

Strangely, Bachmann's disappointment doesn't seem to be resonating with American Jews -- at least not yet. We bet she just needs to give them some comics with a simple-to-understand message, and they'll come right around.

[RightWingWatch via TPM / Image modified from pic at Jewlicious.com]