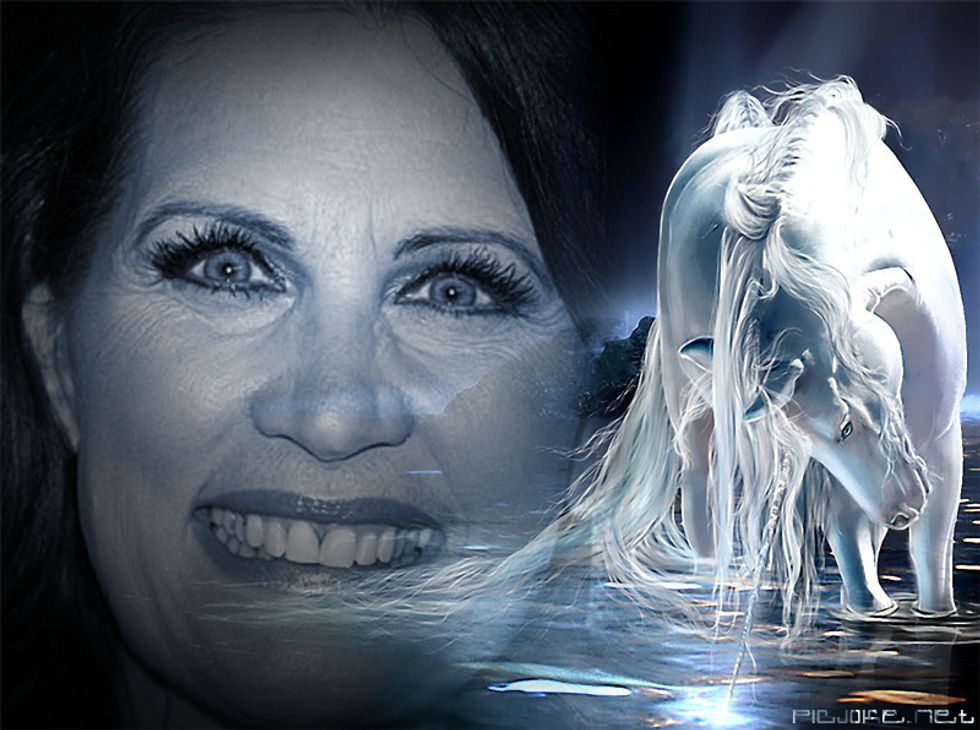 Hey! Were you just thinking about how much you miss hearing Michele Bachmann say Michele Bachmann-esque things all the time now that she is no longer an elected official? Of course you were! You are always thinking that.

In an interview with Breitbart, the simmering cauldron of white-hot white angst that is now running Donald Trump's campaign, Bachmann talked at length about how very upset she was with President Obama for making it totally legal for black people to beat up nice white Trump supporters!

You see, last week, Donald Trump held a $10,000-a-plate fundraiser in Minneapolis, and some people protested it, as they are wont to do. Breitbart, being the only media organization that is not 100 percent owned by Hillary Clinton, was the only outlet reporting on all the horrific black-on-white violence occurring at the event -- which involved standing in front of his motorcade, banging on windows, and apparently forcing some white kid in a green shirt to push some people around on their behalf -- as you can see in this video captured by the Minneapolis Star Tribune, which refused to acknowledge the violence at the event.

Some protesters got aggressive at the end of the night as Trump supporters left Minneapolis fundraiser. @StarTribunepic.twitter.com/gNcZGYhqBm

And in this video from a Pioneer Press reporter:

Probably this is some kind of Patty Hearst type thing!

Anyway, Bachmann explained that the reason none of these black people were arrested during the protest is because police are not allowed to arrest them for ANYTHING anymore. Which means that nice, normal (read: white) people are in danger, and have to fear that attending a Donald Trump rally could mean the end of their very lives.

The people who were doing the pounding, the spitting, the physical touching, the violence, nothing happened to them, there wasn’t an arrest. And part of that is because the Justice Department now has a new program in place for these major metropolitan areas and it’s called Disparate Impact, and what they’re saying is if blacks or Latinos are being arrested in greater numbers than whites, then that is considered an obvious sign of racism. It doesn’t matter if it is more blacks or Latinos who are lawless, cops are told you can’t arrest, you can’t book more minorities than you can whites.

YES. Disparate Impact is the new Affirmative Action, and police are totally unable to arrest black people (or a white guy they clearly Patty Hearsted into being pushy at protests) unless they meet their arresting-white-people quotas! Except not, because that's not actually a thing!

So the cops essentially, at this point, are damned if they do, damned if they don’t. So what’s happening is that normal, happy America, minding their own business, are the ones who are being impacted and assaulted and there is nothing happening to the lawless. So we’re no longer able to be in a situation where we just go about our lives and mind our own business, now we have to practically be our own law enforcement because President Obama has prevented law enforcement from protecting us.

Donald Trump has a plan to stop crime, and it all depends on One Tough Cop. Wish Trump had gotten his name.

WOW! That sure would be awful if President Obama made a law that made it illegal to arrest black people for anything! It's so weird that no one else has heard of this Disparate Impact law, given how serious that would be! It would almost be as serious as hiring "tough cops" to beat up black people on purpose! Which is a thing Donald Trump is proposing!

What we saw, this violence perpetrated against just normal people who were no threat, this act of lawless violence, in itself is an extension of the Obama administration. Barack Obama and Hillary Clinton, when secretary of state, they acted and continue to act in a manner that is lawless. They flaunt the law. The president took an oath to execute the laws faithfully in the United States. Not only does President Obama not execute the laws on the books, he makes up his own laws. In other words, he’s a lawless president and Hillary Clinton has been lawless as secretary of state. And now what we’re seeing on the streets of America is that violence apparently is acceptable if you are opposing a Republican or a conservative or even racially if you’re opposing someone.

Again, very damning. Even as a liberal, I would have to admit that a law allowing people to assault Republicans and white people would be a bridge too far.

ALAS, there is no Disparate Impact law in existence, anywhere, and it seems like Michele Bachmann doesn't actually even know what the concept of "disparate impact" means or applies to, at all, for any reason. Unlike "disparate treatment," disparate impact isn't always evidence of discrimination. But sometimes it is, and sometimes people think it is a good idea to look at instances where laws have a disparate impact in order to see if they are discriminatory or not. In no way does that mean anyone, black or white, is allowed to assault anyone! Weird how that works!

As for why no one was arrested for pushing or banging on doors or stopping a motorcade? I don't know! Maybe no one pressed charges, maybe the police didn't think they could get the charges to stick, or maybe they felt like it would be easier to control the crowd if they didn't start arresting people. However, I am going to guess that it probably wasn't because the police were scared of arresting black people for assaulting Republicans, or because that is legal now.