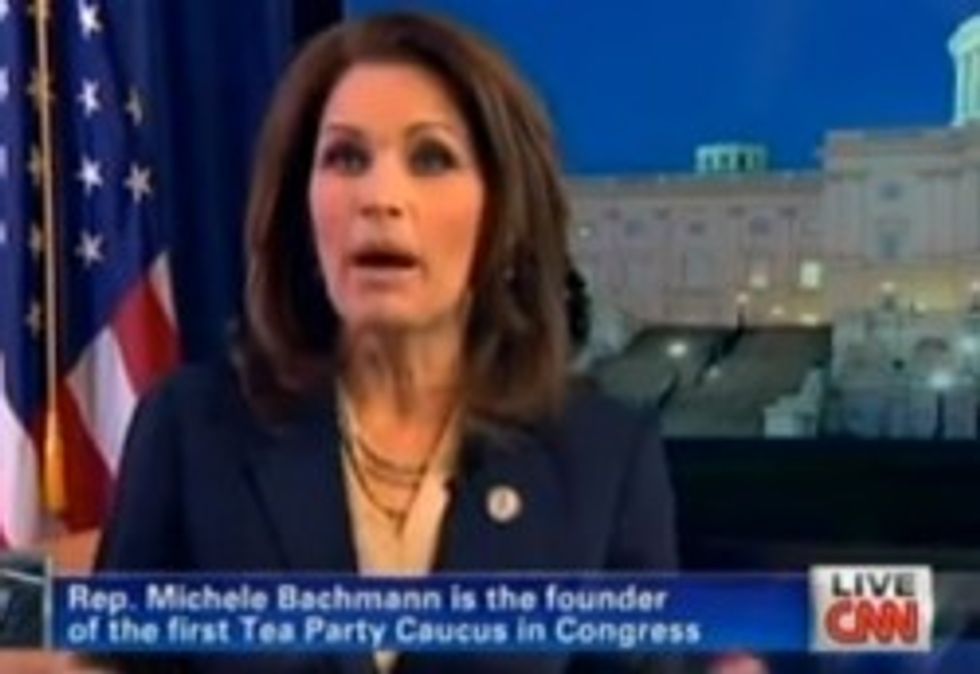 Nut-flavored poopsicle Michele Bachmann was visiting flood-affected regions along the Missouri River when she was asked a very simple question about whether she thought proposed government cuts to the USDA should worry farmers needing help because of the damage. Normally Bachmann would get going on her "government isn't here to solve your problems" speech, but... oh, uh hey, everyone here is white, right? Yeah okay, so here's the real problem, everyone: black farmers stole the money that Michelewould have given you. If those black farmers would stop asking for government money, Michele would hand it right back out to some of the actually needy white farmers!

Michele is illogically referring to a class action lawsuit in which black farmers won a case against the USDA for decades-long discrimination in handing out loans and farm aid, a payment which has cost over a billion dollars to date. Michele incorrectly understands this as "wasteful spending" since it is not a budget item but rather something a court legally ordered the U.S. government to pay. It's not like she went to "law school" or anything guys, what do you want from her?

Republican presidential candidate Michele Bachmann pointed to one program in particular Monday when talking about wasteful government spending: a multibillion dollar settlement paid to black farmers, who claim the federal government discriminated against them for decades in awarding loans and other aid.

The issue came up after Bachmann and Republican Rep. Steve King of Iowa toured flooded areas along the Missouri River. During a news conference, they fielded a question about whether farmers affected by the flooding also should be worried by proposed U.S. Department of Agriculture cuts.

The two responded by criticizing a 1999 settlement in what is known as the Pigford case, after the original plaintiff, North Carolina farmer Timothy Pigford. Late last year, President Barack Obama signed legislation authorizing a new, nearly $1.2 billion settlement for people who were denied payments in the earlier one because they missed deadlines for filing.

This from a question about whether the government should consider easing back on cuts to the USDA. [AP]