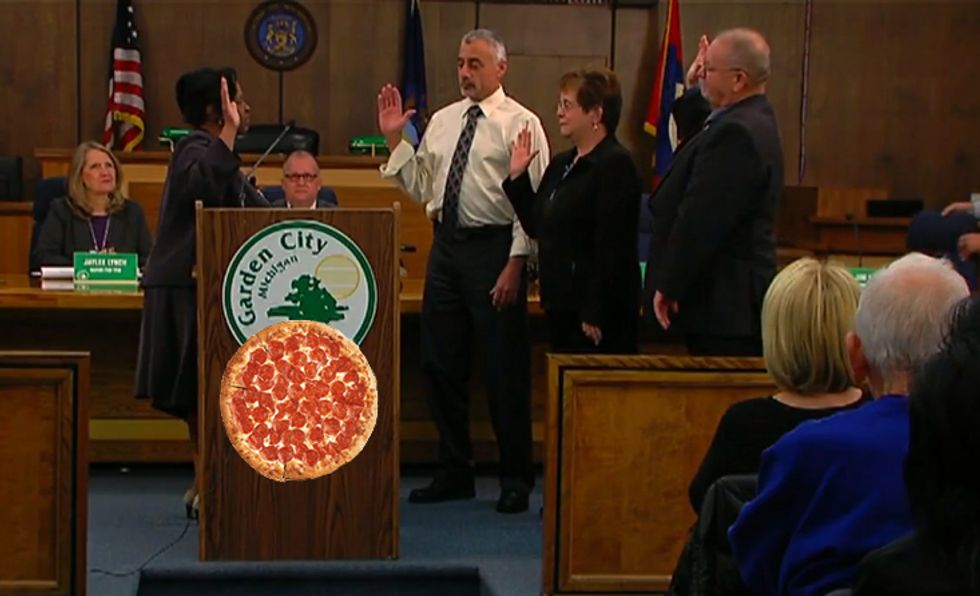 A Detroit-area city council meeting didn't have time to hear from residents whose houses had been foreclosed upon for unpaid taxes, because if it had, the council would have been late for a planned pizza party. There are such things as priorities, for heaven's sake. A group of at least seven suddenly former homeowners in the Detroit suburb of Garden City, Michigan, attended last Monday's City Council meeting to protest the foreclosure and sale of their houses, but the meeting ended early without the council hearing any public comments, because, as we mentioned, council members' pizza might have gone cold.

Mayor Randy Walker explained that the meeting's purpose was for the swearing-in of new members, and taking public comment at a swearing-in kind of meeting is something they just don't do in Garden City. Besides, a bunch of people whining about losing their stupid homes would really have put a damper on things:

Jeez, people this is not hard. Swearing-in = happy; foreclosure = not happy. Besides, Walker told local station WJBK-TV, those irresponsible people had plenty of time to pay their property taxes and head off the foreclosures, even if several of them said they'd come to the council meeting to complain about not receiving adequate notice:

Asked by a reporter if it was rather rude of the city government to have blown off the residents for the sake of pizza, Mayor Walker took a big-picture view, if by big-picture you mean making himself look like a huge idiot on a sufficiently large flatscreen television set:

[contextly_sidebar id="sD2wTibC4zBA2Yayx11umY7NO4ky6LSY"]Especially when there's pizza that might not be at optimum temperature. We believe that this point cannot be over-emphasized. It's not like the soon-to-be evicted people expected the city councilors to take cold pizza home in a box and have it for breakfast like grubby college students, now did they? Besides, it's not like the council followed the meeting by callously dressing up as homeless people. As far as we know.

Besides, the homeowners were behind on property tax payments -- although they have a bunch of dumb excuses like "losing their jobs" and "severe illness." The homeowners also claim the city and Wayne County had not communicated clearly, leaving them under the impression that they still had time to pay, only to receive eviction notices after the city sold their houses to a developer that plans to refurbish and flip the homes. One family said that they'd tried to pay $15,000 to the county in August, but was told that the house had already been sold.

Mayor Walker did at least generously tell the Detroit News that the former homeowners were welcome to come to the next scheduled council meeting and speak, for all the good it will do them:

“The houses were foreclosed by the county,” said Walker, who is the city’s part-time mayor. “We are not the property owner anymore. It’s out of our [tomato-sauce-stained] hands.”

An attorney for several of the homeowners, Tarek Baydoun, said he plans to file a complaint with the state Attorney General's office, contending that the city violated state Open Meeting laws by refusing to hear the residents' complaints. University of Michigan law professor Leonard Niehoff told the Detroit News that state law requires that all public meetings allow public comment, even if there's a pizza in the oven. However, violations are only a misdemeanor, with a maximum penalty of a $1000 fine and loss of salad bar privileges.

[contextly_sidebar id="VLGgvzeKJwvNPzxMxmlZVzJ60JQQHa1P"]As for the homeowners, they look pretty much screwed; the county has made arrangements with some residents who made payment plans but fell behind, and what does it say on the paper, now? It says you lose your home, Losers. Is this communist Massachusetts? No, it is not. These things happen, you know.

The city and county say that they'd like to help the homeowners keep their properties, but they also made it clear that failure to pay on time could result in a tax sale. Ever the charmer, the Mayor told WJBK,

"What's right is right and what's wrong is wrong," Walker said. "Is it fair to 11,000 home owners that have been paying their taxes for three years and getting city and county services?"

Media reports haven't specified what toppings were on the pizzas, but inside sources have disclosed to Yr Wonkette that they were smothered with Privilege, Cronyism, and Indifference, with a side helping of Sanctimony.