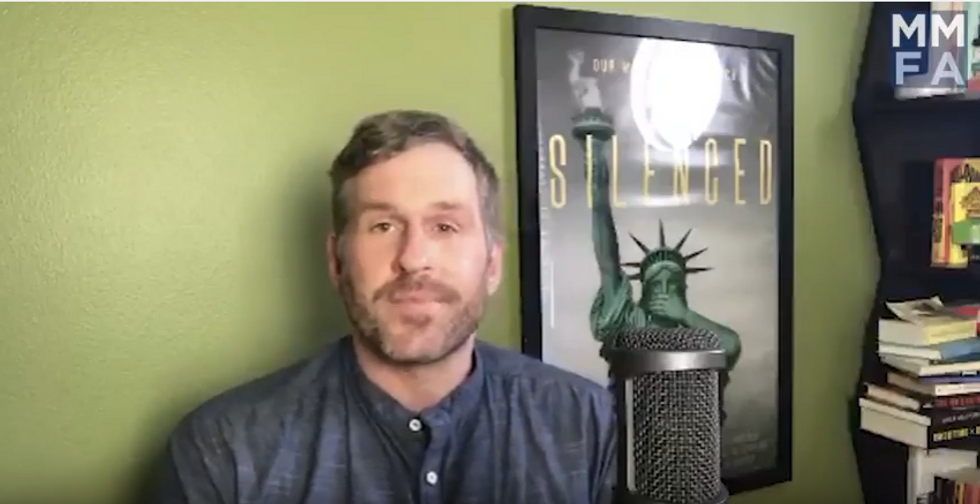 Mike Cernovich, alt-lite troll and magic sperm-haver extraordinaire, announced on Periscope earlier this week that he will now be "pivoting" from being branded as a "pro-Trump" guy, to being branded as a journalism-doer that everyone should take very seriously from now on.

The "pivot," which he didn't even announce from his bed, comes on the heels of the firing of Anthony Scaramucci, whom Cernovich loves very much, on account of how they are both jerks. Jerk solidarity!

The most hilarious thing about this -- apart from him being a "journalism" guy now -- is that he thinks being a "mindset guy" is a thing, and that anyone outside his following thinks his whole "Gorilla Mindset" thing is a thing. Like some producer on a show is gonna be like, "We need a 'mindset' guy for this. Who do we call? I KNOW. That dude with the magic sperm who thinks rape isn't real! He is a very legitimate mindset expert, knows all about the mindset, that one."

Then there's the fact he thinks that he, a guy who went around screaming about pizza parlor sex rings and insisting that Hillary Clinton had a variety of diseases she didn't have, is suddenly going to be considered a respectable, serious journalist.

Cernovich then explains that Scaramucci's firing has led him to the shocking understanding that Trump is not as big of a believer in Jerk Solidarity as he had hoped:

When the GOP elite and the deep state goes after Trump hard, who’s going to have his back? Do you gain anything by risking your reputation, your career, your business, supporting Trump? What is the upside? So, everything in life has an upside and a downside. So, if you go risk it for Trump, you might lose it all, you have a big downside. Huge downside with Trump. What’s the upside?

This "pivot" isn't actually that surprising, frankly. Cernovich's habit has traditionally been to glom onto various movements where he can make a name for himself as an asshole who says outlandish things. He started out as a "Manosphere" guy, moved on to being the "Based Lawyer" of "Gamergate" as soon as he realized there was a market there (though he had made fun of it at first), and then turned into a Trump Guy.

Frankly, the Trump movement was the apex of all the other "It's cool to be a horrible asshole" movements Cernovich had been flitting in and out of for years. This is supposed to be their moment in the sun. And now that it has reached the zenith, it's hardly surprising that Cernovich craves respectability. Especially now, after Scaramucci's firing, has he realizes the hope Trump gave America's jerk population -- that they too would be able to achieve all they ever dreamed of simply by going around saying horrible things to and about people -- was naught but an illusion.

Wonkette salaries are fully funded by folks like you! If you love us, click below to pay our salaries!