Mike Huckabee: If Gays Can Get Married, That Means We Can Buy Black People, Right? 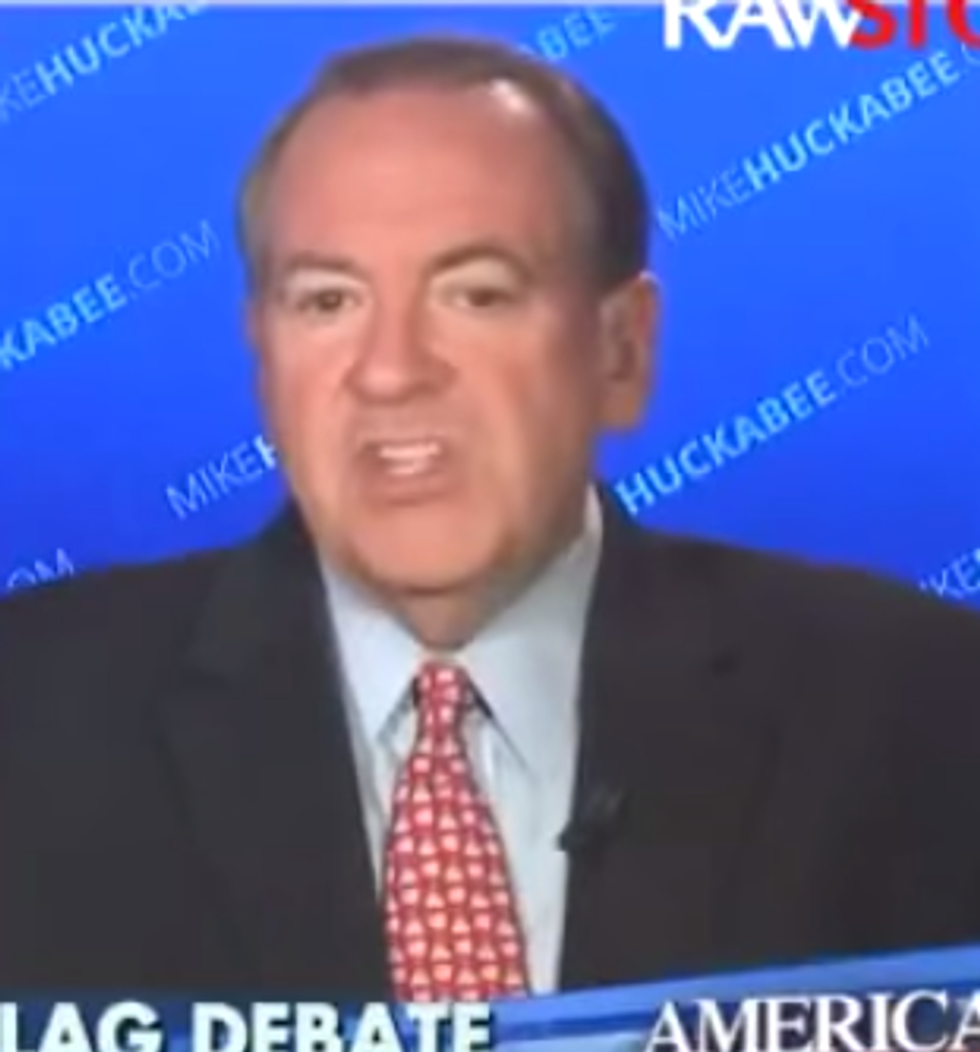 Stupidest living human? Why not.

Time for a multiple choice question! Is Mike Huckabee:

Because here's Mike Huckabee telling wingnut radio host Michael Medved that if Obergefell v. Hodges is the "law of the land," just because the Supreme Court said, then Dred Scott must still be operable, which must mean it's still totally cool to buy and sell black people. He thinks this is his "gotcha," probably because the few remaining humans who believe as he does are too stupid to research the fucking Constitution on their own:

Nope, because the 14th Amendment overturned it, you dildo-sucking fuckweasel. (For the record, at this point, even the wingnut host corrected Huckabee.) Medved then asked about whether Huck wants a constitutional amendment:

The Supreme Court in the same-sex marriage decision made a law ... and they made it up out of thin air. Therefore, until Congress decides to codify that and give it a statute it’s really not an operative law and that’s why what Kim Davis did was operate under not only the Kentucky Constitution which was the law under which she was elected but she’s operating under the fact that there’s no statute in her state nor at the federal level that authorizes her.

JESUS CHRIST, he is A Idiot. First of all, the Supreme Court did not "make a law." It ruled state bans on marriage equality unconstitutional. That's the FIRST thing Huckabee is wrong about.

Huck has said we don't need a constitutional amendment to overturn marriage equality because he doesn't LIKE the ruling, therefore it doesn't count. He says the decision wasn't "valid," according to the whiny ass titty baby "God" he prays to. (By the way, for new readers, we are not talking about the same God most Christians or Jews or Muslims pray to. Huck's "God" is a REAL fucker.) Yes, according to his piss-poor understanding of his Huckajizz-covered pocket Constitution, the opinion of his "God" is somehow relevant to SCOTUS rulings.

Newsflash, for the stupidest person to come out of Arkansas since last time Sarah Palin's tour bus crossed the Mississippi: Obergefell v. Hodges was decided on constitutional merits, therefore there are TWO and ONLY TWO ways to overturn it:

Speaking of constitutional questions, THIS ruling, this gay homosexual Supreme Court ruling, was decided on 14th Amendment grounds. Yep, the same pesky amendment that overturned Dred Scott and upon which Loving v. Virginia was decided. Why won't the 14th Amendment get off Mike Huckabee's dick, yo?

No state shall make or enforce any law which shall abridge the privileges or immunities of citizens of the United States; nor shall any state deprive any person of life, liberty, or property, without due process of law; nor deny to any person within its jurisdiction the equal protection of the laws.

So let's remember our high school government class real fast. The 13th Amendment overturned slavery. The 14th Amendment granted equal protection and dealt with citizenship. And then the 15th Amendment said all the menfolk (but not the ladyfolk) could vote, EVEN the black men. When all three amendments are crammed down your throat within the span of a few years, the end lesson is that the goddamn South lost the goddamn Civil War, no matter what Bubba and his goddamn overalls and his goddamn straw hat think.

Then there's that thing he keeps saying about how Congress has to pass "enabling legislation" for the ruling to matter. NOT TRUE, FUCKWIT. When it's pointed out to Huckabee that Congress didn't have to pass a law to implement Loving v. Virginia or Brown v. Board of Education, he shrivels up his little twat face like he just sucked a bag of moldy rotten dicks, and switches to another talking point, about how this is SO DIFFERENT, because Loving was about the Fundamental Nature Of Marriage, which, according to Mike Huckabee's Arkansan cousin-wife knowledge of world history, has ALWAYS been one man and one woman. Bloody hell, it wasn't even ALWAYS one man and one woman in the Bible, a book he pretends to know very well. (He probably gets a real Huckaboner reading the scratch 'n' sniff version, but we'd reckon his dick'd fall clean off if somebody challenged him to read the original texts.)

Is Huckabee really this ignorant, of both the Bible AND the United States Constitution? Maybe. Or maybe he knows all these things and doesn't care, because his followers are the type of people who would mainline their own turds if the pastor on the television said it would cause a healing. Oh, and also that thing about how Huck obviously hates gay people so much he can't see straight.