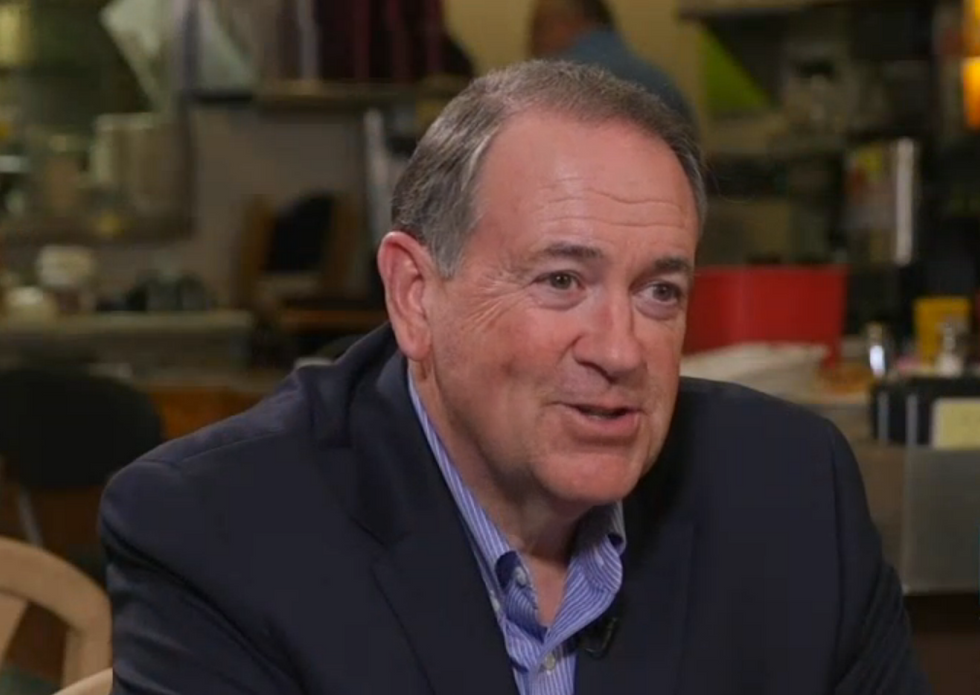 Sniveling rat fart Mike Huckabee is really feeling the pressure of, you know, losing. According to this recent poll of likely Republican voters we just cited to make fun of that other loser jackhole Bobby Jindal, Huckabee is all of one point ahead of "Someone else" in the GOP primary. Impressive, huh? So Huck's taken a break from his normal talking points -- the Obama's doing the Holocaust, slavery has some plus sides, BABIES!!! -- to remind us of how he is also besties with that rancid family, the Duggars. But for a really good reason:

Well, out of 19 kids, you know, as far as we know, 18 kids turned out pretty darn well. So that's a pretty good percentage.

Let that sink in for a minute. Then wipe the vomit off your chin, and dig this:

Look, I'm not going to defend anything of Josh. Nothing. Nothing to defend. But I don't think you can disparage the entire family because one of the members did some pretty bad things.

That's funny, because we seem to remember a Huckabee-shaped shitbag saying Josh Duggar finger-fucking his little sisters weren't no big thang because of how Josh was a teenager at the time, and he said "Sorry, Jesus," so it's all good:

Janet and I want to affirm our support for the Duggar family. Josh’s actions when he was an underage teen are as he described them himself, ‘inexcusable,’ but that doesn’t mean ‘unforgivable.’ He and his family dealt with it and were honest and open about it with the victims and the authorities.

But wait, let's not whip our hands to give Huckabee an attaboy handy just yet. Because we can think of, like, a trazillion reasons to disparage the whole goddamned Duggar family, ACTUALLY. Hell, we just disparaged some of the not-Josh Duggars, like, five minutes ago, because of what looks an awful lot like a scam to collect donations so Jill Duggar Dillard Jingleheimer Schmidt and her husband, Mr. Jill, can do "missionary work in El Salvador."

Oh, and let us not forget those same Duggars, plus some others, cracking themselves up one of those D-bags trying to sled right over a cat. Hahaha. Not that Huckabee would think torturing animals is a bad thing, of course.

And let us not forget -- never forget -- that Ma and Pa Duggar covered up their son's sex criming, which is bad and wrong and also against the law, and definitely worthy of a METRIC FUCKTON of disparagement. Let us also never, ever forget the way those sick bastard fame whores, Michelle and Jim Bob, neither of whom are Josh, were still trying to hold on to their beloved reality TV show, or maybe even have a whole new one, where Michelle could maybe counsel sex abuse victims on how to cover up those tempting little girl shame snatches so their big brothers don't want to stick their digits inside of them, because that is what this EW GROSS DISSSSS-GUSTING family believes is a true thing, and that is what they homeschooled their 19 kids to believe, too.

So yeah, we're gonna have to go with our standard Huckabee conclusion and ask that he fuck himself with the same hand he still uses to stroke all those Duggar nuts, the fucking end.