Mike Huckabee Will Be President Of Making All The Ladies Stop Saying Gay Cusses! 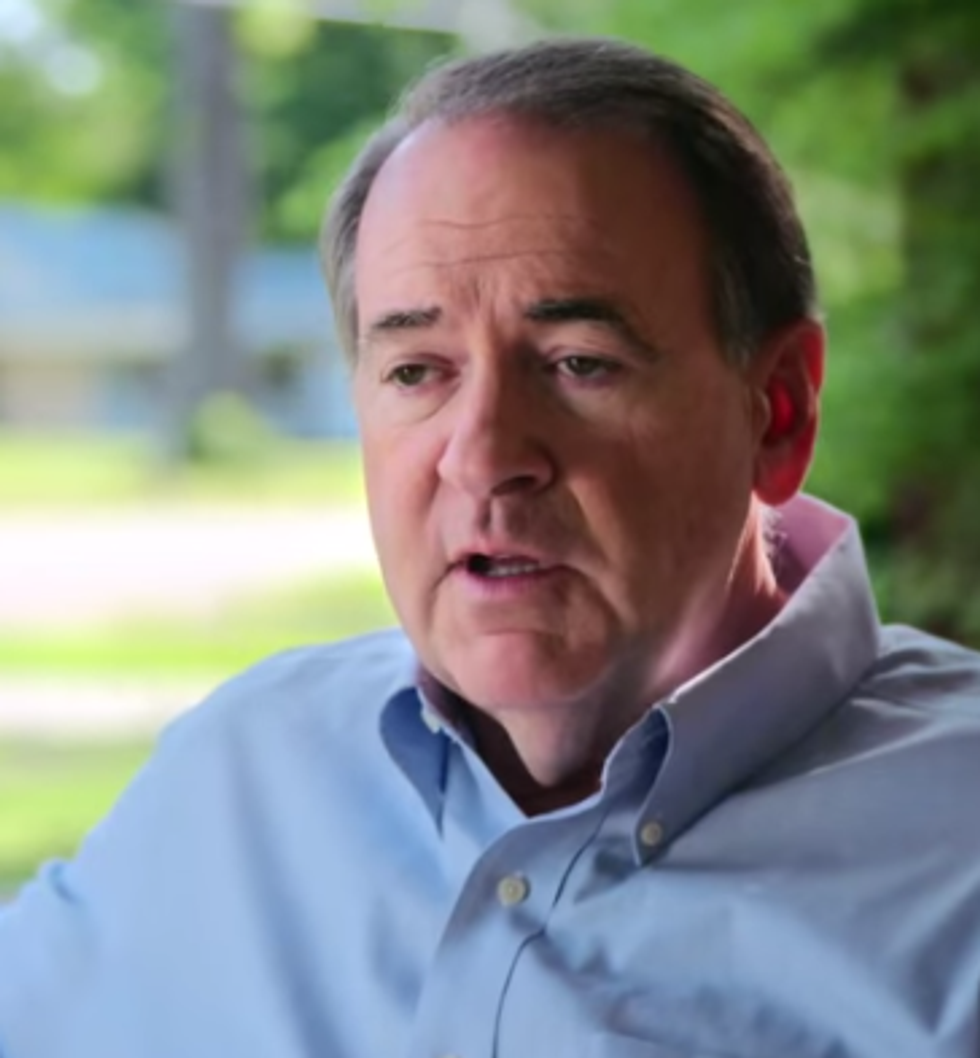 Former Arkansas governor and current traditional values hall monitor Mike Huckabee announced his candidacy for the Republican nomination for president today in Hope, Arkansas, because he is from there, just like Bill Clinton! The theme of the day was "going from Hope to Higher Ground," because using "hope" as a theme has never been done before, by a presidential candidate from Hope, Arkansas. There was nice uplifting music, like that Tony Orlando stuff Huckabee loves, and quite unlike that whore Beyoncé musicthe Obamas love, which Mike Huckabee knows is from the devil. Unfortunately, Ted Nugent was not there to help Huckabee sing about bitches' pussies, BY WHICH WE MEAN KITTY CATS.

In a nice video before Huckabee's speech, his wife Janet, in a very heartfelt, sincere way, gave her husband ALL the credit for not leaving her when she had cancer. So, Huckabee advances past John Edwards in the Good Guy department, we guess! Mrs. Huckabee also asked the country's most pressing question: "Is the unborn protected?" Wonkette would also like to ask: Is our unborn learning? But we're not here to make fun of Janet Huckabee, she's fairly likable.

Huckabee finally took the stage, at which point he read Bill Clinton's campaign announcement speech, THE REMIX, which included a bunch of extra shit about how, unlike Clinton, he learned how to pray facing Nazareth five times a day. He also said he learned as a child in Hope how to shoot a gun, but that he "never thought about using a firearm to murder someone." Wow, combined with the fact that he didn't leave his wife when she had cancer, we don't know if we want to marry, fuck or elect him! For the record, Huckabee really hates the death penalty, but only because he had to kill so many people as Arkansas's governor. We bet Death Penalty Day was such a drag for him!

Huckabee said we can REALLY fix healthcare if, instead of doing Obamacare to everyone's grandmother, we were "focusing on cures instead of treatment." Which is funny, because part of the whole point of Obamacare is to get people insured so that they can actually go to the doctor for preventative care! But you know, details.

Huckabee then said he will totally defeat ISIS and Iran, unlike that pussy Obama, and that he will be super-nice to Israel. He lamented the fact that tyrant Obama is meaner to Israel, when they just want to "build bedrooms in Judea and Samaria," than he is to Iran, who wants to build nuclear weapons! He also says that Obama is so dumb that he couldn't "watch a Western from the '50s and figure who the bad guys and the good guys are!" (HINT: IT IS THE RED INJUNS WHO ARE THE BAD GUYS.)

And of course, Huckabee flicked his tongue all over social conservatives' ashen G-spots, like a good southern preacher, when he name-checked the "slaughter of over 55 million babies," and said that the liberals are "criminalizing Christianity" by "abandoning biblical principles of natural marriage." He wants everybody to remember that "the Supreme Court is not the Supreme Being, and they cannot overturn the laws of nature or of nature's God!"

After hitting a couple more pleasure spots about immigration, Huck jammed his finger right up against the crowd's collective prostate by saying he will fight for the fair tax and to eliminate "the biggest bully in America," the IRS.

And then he finally wrapped up, because the floor was super sticky.

Want to watch Huckabee's official presidential announcement video? It was "leaked early" (kinda like how Ben Carson "leaked early") and surprise, the stars of the video are Bill and Hillary Clinton, because (shhhh don't tell anyone) Republicans have absolutely nothing to run on in 2016 besides Clinton-hate. In the video, Huckabee says that he can totally beat Hillary Clinton, because he's beat the Clintons before, even though that's not really, actually, in any way that's related to the facts, true. Anyway, they're all from Arkansas, is the point. He also does his little Republican populism thing, and says that he'll keep "all options on the table" for defeating radical Islam, which means bombs, yay! This would have been a great announcement video, in the year 2002!

A Children's Treasury Of Huckabee Being Gross And Creepy

All right, now that we're done with all that, here are some times Mike Huckabee has been weird, gross, prudish, mean, creepy, or other such-like things, just so you know what you're getting into when Huck steals your heart and your ladyparts by strumming beautiful sex songs at you with his friend Ted Nugent, rendering you unable to NOT vote for him:

What a character! We bet America is really going to fall RIGHT in love with him.

So anyhow, everybody needs to prepare for 2016, starting with quitting the gay sex and the cusses and the slut pills, because those things make your new president uncomfortable in his Down Theres. All hail President Huckabee!