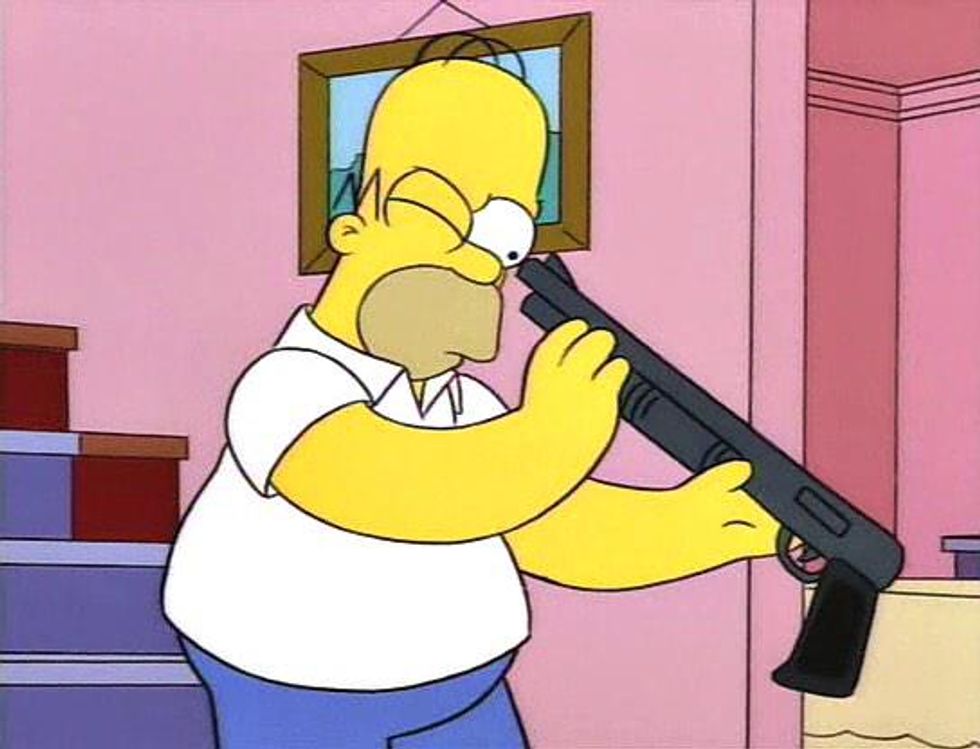 Mike Huckabee visited a gun range in Johnston, Iowa, Tuesday so he could check off "Did Second Amendment Stuff" on his campaign checklist. And while he was there, he explained that he's not especially worried about whether gun owners actually have any training in using their weapons, because for heaven's sake, if the Founders had wanted the militia to be well-regulated, surely they'd have said something about it somewhere, maybe.

A reporter asked Huckabee to comment on Iowa's permitting regulations, which she described as watching a 30-minute video and passing a written test, without the necessity of any "actual hands-on training." Huck thought that was probably plenty, if it's what the state wanted:

You know, I leave that to the states. Let me say that there's less worry I have about someone maybe not being as trained as they could be, because I think ultimately a citizen who is going to arm themselves is going to want to avail themselves of significant training to become proficient. I mean, that just makes sense, for their own sake. But if they don’t, a good guy armed is still better than a good guy unarmed.

Huckabee went on to explain that the responsible thing to do is to get some training on how to use your weapon and store it safely, because that's just good sense, but added that "that’s an individual responsibility, so I wouldn’t try to get in the way of what the state thinks is the right way to go about that." Huckabee wasn't asked about Iowa's law allowing blind people to get handgun permits, but undoubtedly would have supported it enthusiastically as well, since while it might be ideal for someone wielding a deadly weapon to actually see what they're shooting at, it's up to the states to decide that sort of thing.

We'd ask a snotty question here about whether Huck also thinks drivers and surgeons should also do the responsible thing and learn how to do whatever it is you do with a car or a scalpel, but that there's no need to burden them with government licensure, but we already know the answer: Ain't no cars or doctorin' in the Constitution, which is what makes guns special.

And just how special are guns? At the same event, Huck also said, in answer to a question from the audience, that civilians should be able to own any weapon they want, including the cool military stuff:

MAN: With the way things have gone, now I have arms that I only dreamed about in the past. Do you think the government should come in and limit what type of arms a person, a law abiding person can purchase?

HUCKABEE: No because there's nothing in the Constitution that gives them the authority to do that.

MAN: We shouldn't have muskets (inaudible) we should have everything the military has?

HUCKABEE: We should have whatever we choose to have. Because it's a citizens right. The government shouldn't tell me what the limitations of my self-protection are. If somebody's going to break into my house I want to at least be as well-armed as they are if not better armed than they are. My plan is always to have a better arsenal to defend myself than they are going to have to try to attack me. So whatever I must do to do that. And I've been asked on many occasions, "Well how many firearms do you have?" Well, the answer to that is none of your business. It's for me to know and for you to find out. But I'll put it this way I have more than one gun safe and I need them both. Phil Gramm once famously said [...] he said "I have all the guns I need but not all the guns I want."

So there's your answer -- you want to come at Mike Huckabee, you'd best bring your rocket launchers and M1A1 Abrams tank, and even then, he will fuck you up. Just like Jesus promised in the Constitution.