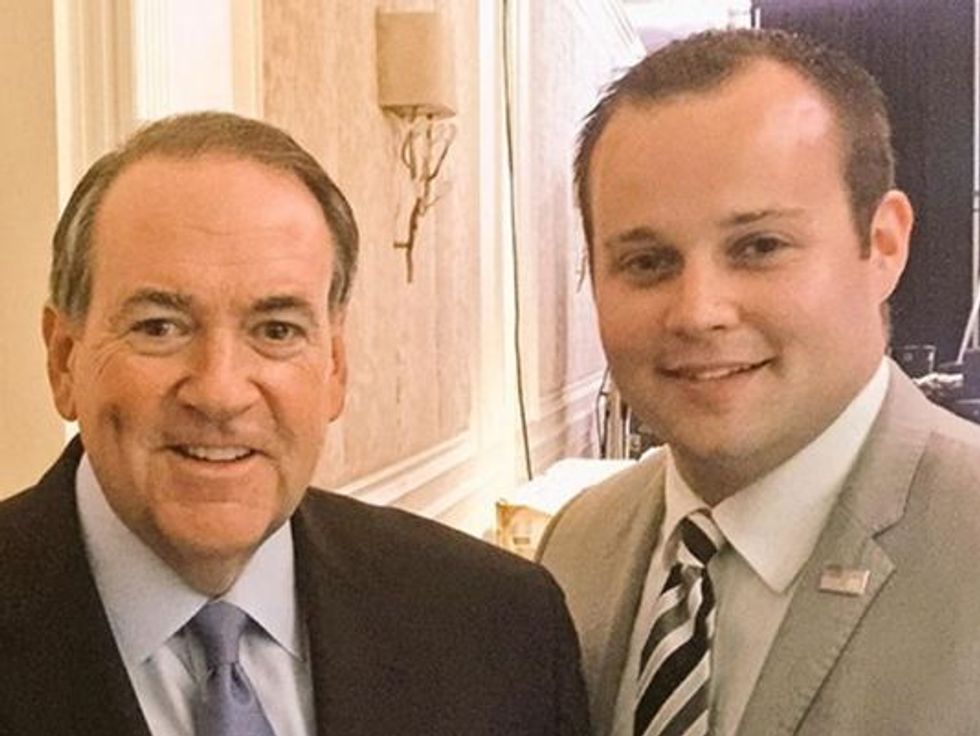 You might not like the politics of conservative cuddlebear Mike Huckabee, and you shouldn't, because they are terrible. But come on, everyone agrees he's so jolly and funny and fun, and even the liberal New York Jew Jon Stewart loved pallin' around with the guy!

So then who the hell is this rude rage-fiend, getting all up in some poor lady's face and yelling at her because she had the temerity to show up to a Huckabee campaign event in Iowa and ask him questions about one of his all-time favorite subjects, The Children?

LADY: You talk about children. What's your views on child abuse?

HUCK: I don't know of anybody who's for it. I think it's abominable practice that anybody to abuse a child. I think the ultimate form of child abuse in this country is abortion. It's the most irreversible form of child abuse. But the abuse of any child, Regardless of what age, is unacceptable.

Now, hold on. Don't go using up all your SCREW YOU, HUCKs just yet. You're going to want to pace yourself.

LADY: How come you support it then?

HUCK: How come what?

LADY: You support it.

HUCK: Now why on earth would you say I support child abuse?

LADY: You support it on your websites. When the Duggars came out and their son had molested the child, you more or less said that you felt sorry for the parents. Their parents let it continue for a year.

Oh right. That. The whole thing about how Mike Huckabee is bestest buds (still!) with the whole really gross reality TV cast of "A Trillionteen Duggars & Counting," even though eldest son Josh molested his kid sisters a whole bunch, and his parents covered it up like common criminals who might be rotting in prison if not for that bullet-dodging statute of limitations. Right. That thing.

HUCK: I'm going to stop you -- no. Let me stop you. Because you're accusing me of supporting child abuse and I'm going to take you on with that because that hurts my feelings and it's absolutely --

LADY: It hurts my feelings too that somebody like you are [sic] running for the American public.

Us too, Iowa Lady. Us too. But Huck's not even close to done hurting our feelings yet:

HUCK: Let me finish! Let. Me. Finish! You bet I can. This is my event. You accused me of supporting child abuse --

HUCK: Ma'am, I'm going to finish. You do not know that family. I do. I never supported anything that happened to those daughters. I supported the fact that those daughters were maliciously and savagely abused, not just by their brother but by the news media who exploited them for their own purpose without regard for what it was doing to those young ladies.

[contextly_sidebar id="zagIyD42IjNx7LZc78ttu0aogBk9Gg9n"]Yes, it was the terrible news media who forced the Duggars to exploit their children for years on TV to make lots of ka-ching ka-ching, in Jesus name, and then dragged two of Josh's sister-victims on Fox News to tell Megyn Kelly about how the liberal media molested them even worse than Josh did. And then kept begging for more reality TV shows, please, because there's a whole new generation of Duggar younguns, and Ma and Pa Duggar really miss the cashflow.

LADY: Locking those girls in their room? So Josh wouldn't…

HUCK: You know because you read Tabloids. You read People magazine. You don't know.

Yeah, she reads the tabloids. And the police reports in them. And the Wonkette. And the TV with all the interviews of various Duggars explaining how they hid Josh's sex-criming FOR MORE THAN A YEAR and made new family rules, like no more opposite-sex hide-and-seek-playing anymore, just in case.

LADY: You know what?

HUCK: No, You know what? You've come in here to confront me, which is fine. But you cannot abuse, which is what you're doing, the reputation of a godly family, who had been through hell because the son of theirs, one of their many children, did something evil and sinful… that nobody is backing up and supporting.

Yeah, nobody was supporting Josh Duggar. Certainly not Mike Huckabee, who said his crime -- of molesting children -- was gross, yeah, but not "unforgivable," and there was no reason "to discredit Josh or his family by sensationalizing the story." Besides, as Huckabee has since pointed out, just think of the Duggar spawn who aren't child molesters, because "out of 19 kids, you know, as far as we know, 18 kids turned out pretty darn well. So that’s a pretty good percentage."

But anyway, back to yelling at this rude lady who wants to know why Huck is still friends with the rotten terrible scumbag Duggars:

HUCK: But I would support any family who tries to work through their problems under the Grace of God. And as a Christian, as someone who believes that if a person has a problem in their family, that somehow they're fair game, to be criticized without people knowing what the heck they're talking about -- So I'm gonna ask you to stop talking about them unless you personally know them.

[contextly_sidebar id="kScae4vDodZLxFbAD55sLtgOGb83kis9"]Got it. So you're only allowed to trash-talk people you personally know. Guess that means Huckabee's spent a lot of quality time with Beyonce, huh? And those terrible Obamas? And the murderous The Clintons? Or is that different somehow?

LADY: The parents knew about it. They let it go on for over a year.

HUCK: They stopped it. And they began to seek treatment. You know not what you talk about, ma'am.

Right, that would be the "treatment" of eventually sending Josh off to do some manual labor and think real hard about Jesus was disappointed in him for finger-fucking his sisters.

But anyway, Huck is done dealing with this woman's "abuse."

HUCK: You got what you wanted. You made a scene. We're all very delighted that you were able to come and get your pound of flesh out of family that has been through a living hell. I hope you never have a child that has a problem.

Ahhh, there's that famous Huckabee compassion we've heard about for years, the kind New York Times columnist David Brooks wrote about just the other day, praising Huck as a True Compassionate Christian who cares about "the least fortunate among us," wishing the brutal pagan Ted Cruz could be more like Huck.

Good god, can you even imagine? One Mike Huckabee in this world seems like more than enough.