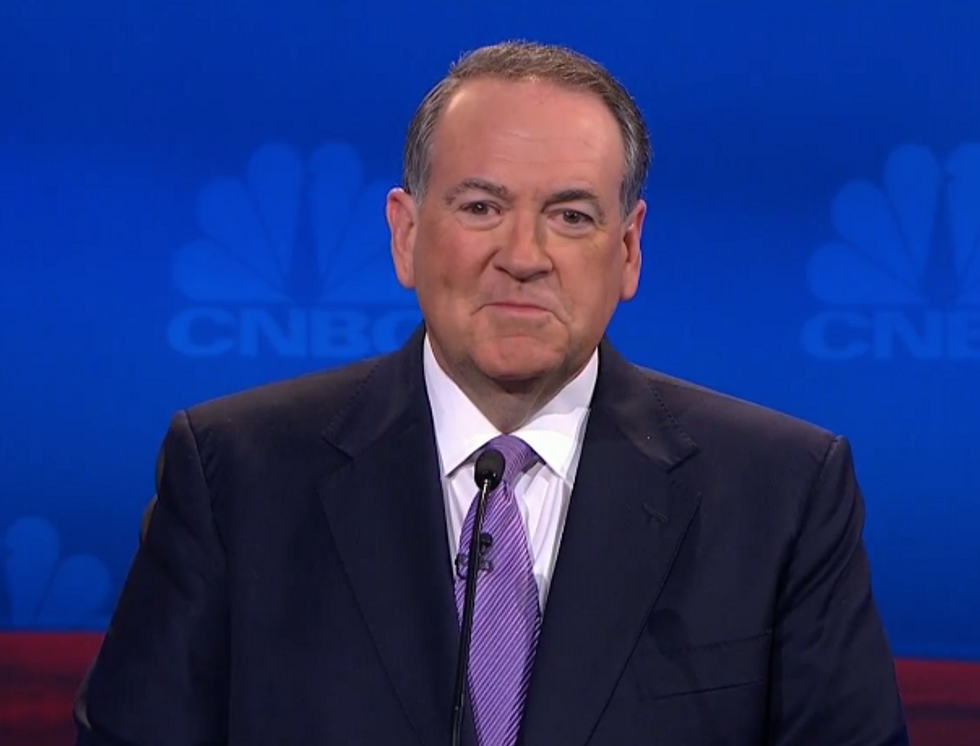 Uh oh, we got a regular COMEDIAN PERSON in the house, and yr Wonkette knows from comedian people! It is former Arkansas governor and Republican presidential primary candidate Mike Huckabee, whose daughter Sarah works in the Trump White House and whose son David murdered a dog one time. With overachieving kids like that, you've got to have overachieving #DADJOKES, and boy oh boy, we hope you're ready for this, because if you're not, you will definitely poop your pants in joy at Huck's jokes on the Twitter!

For instance, today Supreme Court nominee Neil Gorsuch is having his hearing, and it's kind of ZZZZZ because Gorsuch comes across as a smooth, nice, smart guy, even if he is the Hobby Lobby judge who once ruled against a trucker who committed the crime of trying to keep himself from freezing to death while on the job. Huckabee with JOKE NUMBER ONE:

Do you see what Huck did there? Gorsuch is answering questions relatively well, and that means the company called Jimmy Dean will change its name, because they have been outdone in grinding pork. It is a very hilarious joke.

Let's do some more of Huckabee's Twitter feed, to find out if he serves these up on the daily. Oh here is one!

Oh! LOL! Mike Huckabee has performed the unique humor trick of rhyming, in this case trading "Snoop" for "Poop." This is kind of like when we are feeling lazy and call Huck "Fuckleberry" or something, instead of pointing out that he's a rancid sack of molten goat smegma with buttplugs for ears and Mike Huckabee's face for a face. Also, it's pretty hard to LOL when Huckabee makes a dog joke, because SEE ABOVE.

That is ... oh, we think that one's not a joke? BREAKING OUCH NEWS: When Mike Huckabee's Razorbacks (GO HOGS!) are doing bad, he wipes the squirrel gristle off his face and out from under his neck, and then retrieves the clicker from between his huck-a-nipples and changes the channel to Honey Boo Boo, because that's his show, we guess. (We would have thought the gross Duggar family he's pals with, with the oldest boy what fingered his family, would be his favorite reality show, but no.)

Here's a clever joke that combines Expressionist art and Nancy Pelosi Is A Shrill Bitch, cleverly:

Can you handle more? Because we can't stop scrolling through dipshit's Twitter feed.

Something tells us Huck's Week With No Salads started a LONG TIME AGO. This one got better, though, because somebody else noted the same thing:

Wait for it. Wait for it. The wheels of Huckabee's brain are turning and spinning and going out of control and WHOA FIDDLESTICKS, THERE'S A HIDDEN PUN IN THAT THAR MEAN TWEET:

Yep. The moment when Mike Huckabee forces Wonkette to imagine Mike Huckabee imagining a salad doing P-in-V sex to itself, that's the moment this post is just about over.

Now, having seen all of these #jokes, you may be thinking, "I am clearly unworthy, for I do not understand the high dark arts Mike Huckabee uses to construct humor giggles. What should I do if I am not amazed by these jokes?" Huck has answered:

Well, I guess we have been YA BURNT and will unfollow in shame.

Know what makes Wonkette happy again? Clicking the happy banners below and throwing us a few bucks!