Mike Pence All 'Erdogan Who?' As Turkish Pres's Bodyguards Go Wilding. On Americans. In America. 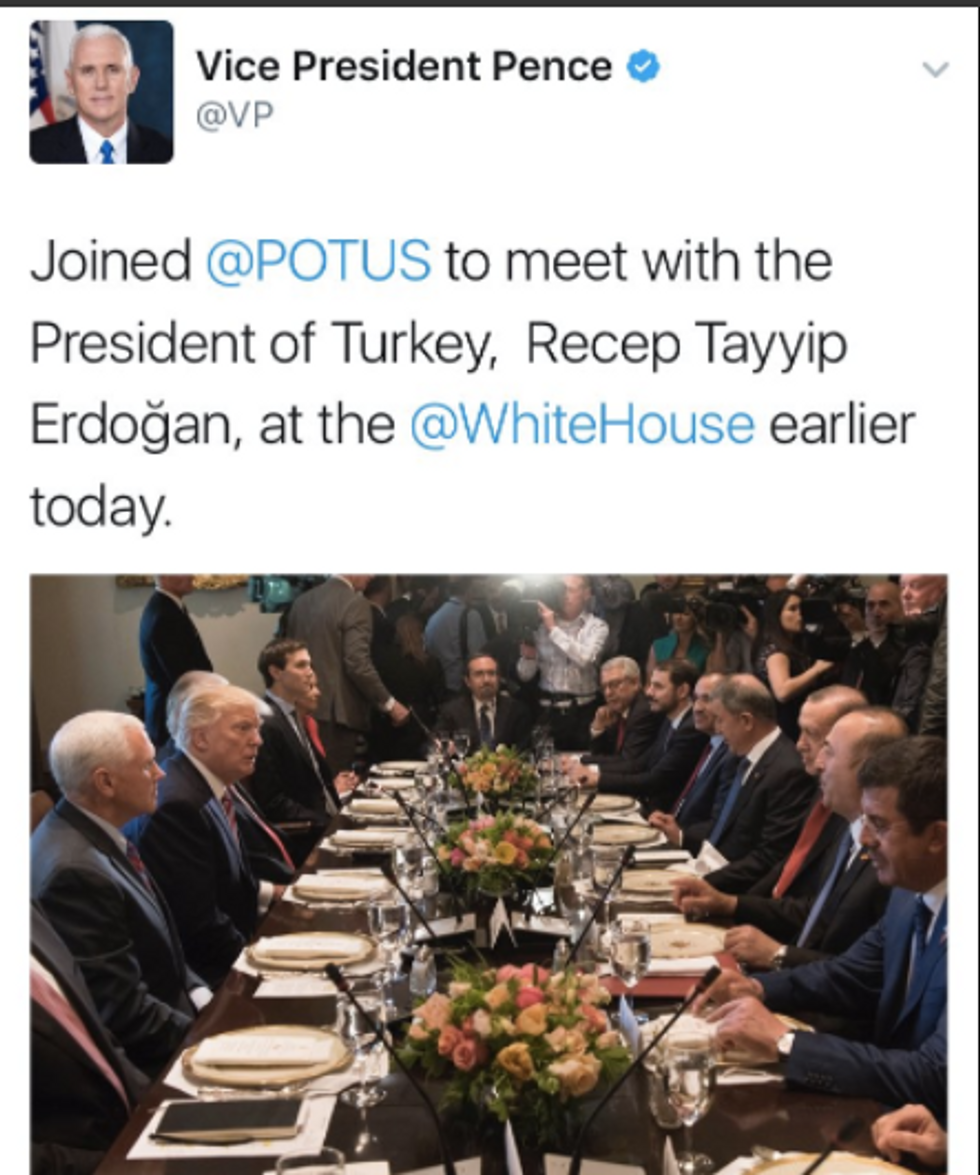 We were dicking around on Twitter yesterday -- it is our job -- when Vice President Mike Pence tweeted something stupid.

Oh haha, we had such a riposte at the ready! But within moments of our clever, informed, and most excellent jab, Vice President Pence had deleted his tweet!

oh do you mean the guy Mike Flynn was secretly taking money from while getting National Security briefings?

We immediately took credit. It was, after all, a bad week for the vice president to be bringing up the many ways in which Mike Flynn had secretly received payments from Turkey (and Russia!) while receiving American national security briefings, since news had JUST BROKEN that The Idiot wanted FBI Director James Comey to stop investigating exactly those things about Flynn, and fired him when he didn't.

Also, Flynn once plotted to kidnap a Turkish cleric living in the US to hand over to Erdogan for him to murder, so that was bad too.

Shortly after deleting his tweet, Pence's missive was revised to delete any reference to Turkish President Recep Erdogan and instead emphasized that Turkey is our NATO ally, while also bringing up Andrew Brunson, a Christian minister Turkey has jailed, which was a pretty transparent way to gin up support from our easily ginned Christianist brothers and sisters.

But we soon discovered the credit wasn't ours, but Erdogan's bodyguards', and presumably Pence's editing was related to the simultaneous beatings Erdogan's bodyguards were handing out to Kurdish protesters, right in Washington DC, right on Embassy Row, as Pence and Trump dined with the Turkish president.

Oh wait, no, that was Erdogan's bodyguards attacking a female journalist in Washington DC A YEAR AGO. Here is yesterday.

Here's a "funny" thing! When we looked up "Turkish bodyguard video" to find you the shitkicking from yesterday, this is what Google served us:

Here is a horrible picture from "Kurdish Solidarity" on Twitter.

Andrea Mitchell of NBC says US officials confirm it was Turkish President Erdogan's bodyguards who were beating the shit out of American protesters on American soil.

Is there a foreign dictator Trump DOESN'T love?

So there you have it. Vice President Mike Pence wasn't cowed by little old us and our funny barb; he just wanted to distance himself from the violent thug President Trump has wholeheartedly welcomed to the White House after Erdogan "won" Turkey's election just like President Trump "won" ours.

Birds of a feather and all that. We will let you know when President Trump arrests Erdogan's thugs for attacking Americans. Let us set our alarm right now for never-o'clock.