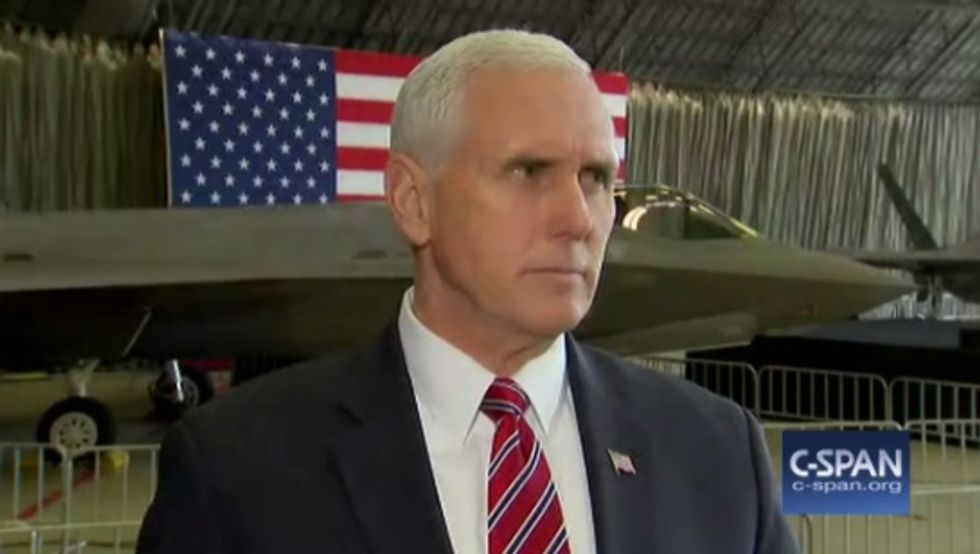 Question to Vice President Pence about Rob Porter: "Can you comment on why you often seem a little bit out of the loop on some of this major news?" pic.twitter.com/oi5vt8iKS5

Finally! CNN's Ashley Parker nailed Mike Pence after he said he didn't know nothing about no spouse abuse by no "Rob Porter." Rob Porter who? You mean that Senator from Ohio who sometimes acts like he might vote against dismantling healthcare for millions, but then votes for it? Oh. That's Portman. Porter, you say? After another reporter asked Pence to comment on Porter's "resignation" and the White House response, Pence tried to punt (go up and watch the video, you laggards, it's under a minute and a half):

Let me say we're standing at Yokota Air Force Base in Japan, we're on our way to the Olympics, and, uh, I learned as I awoke this morning of those developments and so we’ll comment on any issues affecting White House staff when we get back to Washington.

Very good, Mr. Vice President! You passed the "orientation to place" part of the cognitive exam! What day is it? (A Gotcha question, since he crossed the international date line and it could be the future.) For some reason, "going to the Olympics" didn't seem like much of an answer to Parker, whose follow-up almost resulted in an audible veepgulp:

This is now a number of times when you've found out -- you’re the vice president, you’re the number two in the administration -- where you found about something very late, after a number of other senior staff below you even in the West Wing have found out about it. Again, I understand we're standing here, but can you comment on why you often seem a little bit out of the loop on some of this major news?

It was quite courteous of her to acknowledge that they were indeed standing in Japan.

Unable to match anything in his dataset to that question, Pence's head bobbed the slightest bit, he smiled slightly, and then his programming kicked in and he glurged out an outright anti-answer:

You know, it’s a great honor for me to serve as vice president. President Trump has been incredibly generous with the responsibilities and opportunities he’s given me to serve, representing the United States on the foreign stage as we have here in Japan, as we will later today in South Korea, and of course at the Olympics.

And also being involved in the legislative process. And I’m, I'm very grateful for that. But we’ll, we’ll leave those White House staffing matters for when we get back to Washington.

Yr Wonkette is supported by reader donations. Please click here to support our Explaining To Harlan Ellison A One-Line Reference is Fair Use Fund