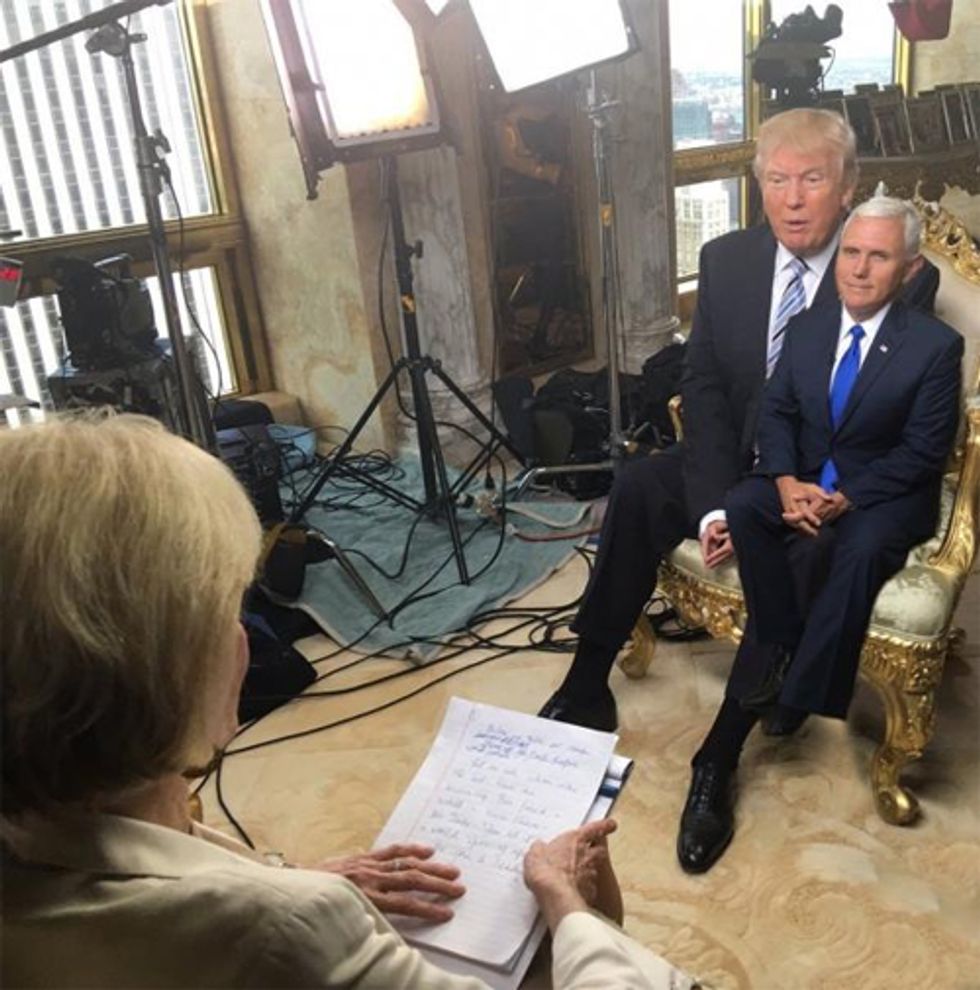 Stoled from Twitters, will credit if we find out what magnificent bastard did this.

So here is another important piece on the decision-making processes of Republican nominee Donald J. Trump, millionaire, who owns a mansion and a yacht. It's all about how he chose his vice presidential nominee, some guy from Indiana who everyone has to keep looking up. You should check it out for its sheer jaw-drop value, -- which author Robert Draper gets out of the way in the first four grafs -- and then keep reading for more insights into what, for want of a better word, we'll call the "character" of Donald Trump. But first, that opener, and it's a doozy!

One day this past May, Donald Trump’s eldest son, Donald Trump Jr., reached out to a senior adviser to Gov. John Kasich of Ohio, who left the presidential race just a few weeks before. As a candidate, Kasich declared in March that Trump was “really not prepared to be president of the United States,” and the following month he took the highly unusual step of coordinating with his rival Senator Ted Cruz in an effort to deny Trump the nomination. But according to the Kasich adviser (who spoke only under the condition that he not be named), Donald Jr. wanted to make him an offer nonetheless: Did he have any interest in being the most powerful vice president in history?

When Kasich’s adviser asked how this would be the case, Donald Jr. explained that his father’s vice president would be in charge of domestic and foreign policy.

Then what, the adviser asked, would Trump be in charge of?

You really could stop reading right there, since it ought to be enough for you to ponder for the whole rest of the day. We already knew Trump intended to be a sort of "hands off" president who'd be as much of a figurehead as he thought he could get away with, so he could be the "chairman of the board" instead of the "CEO or COO," but apparently what Trump really wants to be is Queen Elizabeth with a Twitter account, or maybe one of those superannuated cartoonists whose name is on the daily comic strip but who leaves all the writing and drawing to assistants so he can focus on the important work of being a beloved cultural figure. But as the kids say, wow, just...wow.

The vice president will handle the fiddly little details like domestic and foreign policy, and maybe shaping the coastlines, while Trump will handle all the Great-Making for America. Which, based on his mastery of factual details, is in fact the sum of the job description for him: he will literally say America is great again, and it will be so. That hurricane bearing down on Florida? Not great, let Mike deal with it. The dead and injured after the hurricane? Truly sad, why did those losers stay in their houses with a hurricane on the way? The public memorial service, with the TV cameras? Trump will be so there, and warning future hurricanes they'd better not mess with America.

So, the rest of the article -- it's short, but after that opener, you may want a breather, or an emetic -- is a pretty good look at how Team Trump sorted through the list of people who might conceivably be willing to play second fiddle to Trump's ego and actually do the scutwork of presidenting, while getting none of the credit. Mostly what we learn is that Trump is an impulsive jackhole with a short attention span and a Nixonian capacity to hold grudges, so we're not really learning anything new about Trump, just seeing new manifestations of the TrumpoSphere at work. People who say no to Donald Trump -- or who are insufficiently enthusiastic toward him -- are immediately declared unpersons, like New Mexico Gov. Susanna Martinez, who Trump thought might be good for the ticket, but failed to return several phone calls from Corey Lewandowski, so Trump not only dropped her but publicly insulted her in a speech in Albuquerque -- another of those moves that no doubt will make The Hispanics love him.

And so on. Joni Ernst was called in for a meet-n-greet at Trump Tower, "but her interest was only slight, and Trump’s seemed not much greater. She dropped off the list with no fanfare." Bob Corker was flattered to be considered, but told Trump directly he thought he wouldn't be a great fit for veep. But he'd love to serve in the cabinet, maybe. Trump wasn't receptive to the suggestion, because it wasn't his idea:

Trump squinted at the senator for several seconds before saying, “O.K.” They then flew to North Carolina for a rally, where Trump called a tongue-tied Corker to the stage — leaving many observers to believe that this was the senator’s audition, and that he flunked it.

[wonkbar][/wonkbar]We even manage to feel a little sorry for John Kasich, who we're already aware can be a petulant asshole all on his own. After turning down overtures from Trump surrogates -- including the visit from Donald Junior, who presumably kept his American Psycho persona under wraps -- Kasich finally crossed the line. Trump's people had been pushing for at least a pre-convention endorsement, but not even that was forthcoming:

On July 4, the Kasich adviser John Weaver called Manafort at the governor’s request and flatly informed him that no such preconvention endorsement would occur. Spurned twofold, Donald Trump would lose a vice president but gain an enemy.

[wonkbar][/wonkbar]So how did Trump finally settle on Mike Pence? He didn't come with anywhere near as much baggage as Gingrich or Christie, he might appeal to evangelicals, and most important of all, he was willing to say "yes." So that's all he needed, and if Donald Trump is elected, Pence will be sort of a photographic negative of Dick Cheney: the guy who really runs things, as long as he keeps following orders or at least doesn't speak up too much. He'll be like Waylon Smithers to Mr. Burns, only without the gay stuff, because ew.