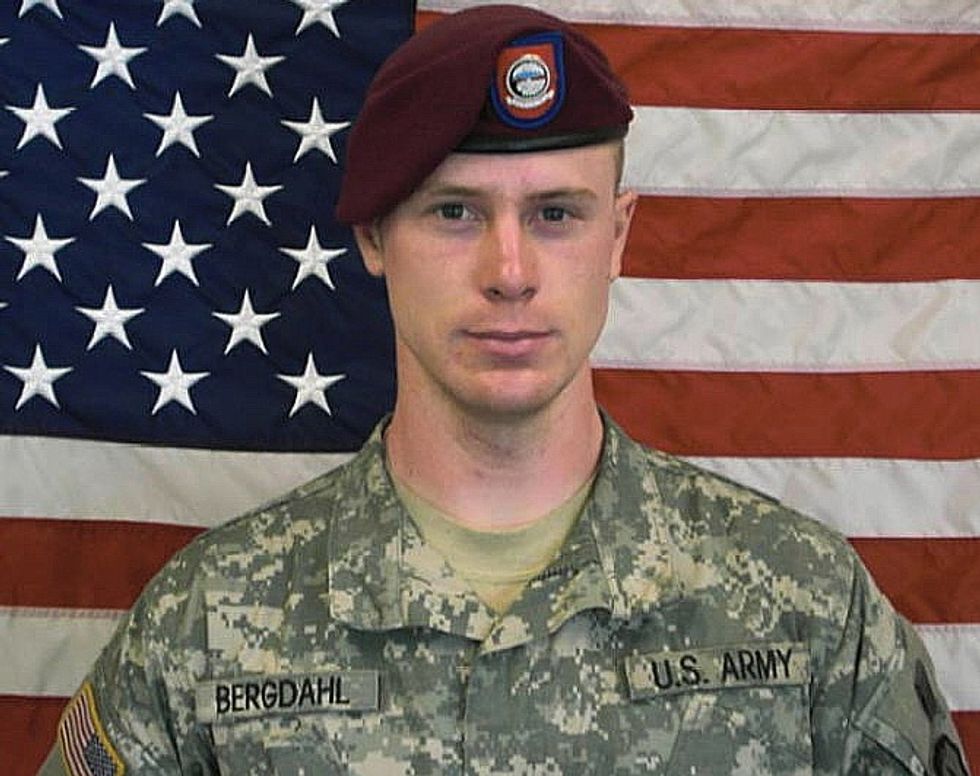 [contextly_sidebar id="a1kEo5nC2uoWdwX6unIQImf06TjtRlrS"] Bowe Bergdahl, the Army sergeant who walked off his base in Afghanistan in 2009 and spent five years in captivity with the Taliban, will face a general court-martial on charges of desertion and of "misbehavior before the enemy," which sounds like he farted and stuck out his tongue, or wore white after Labor Day, but actually means he's accused of endangering the troops who were sent out to search for him. If convicted of the latter charge, he could be sentenced to life in prison, which is a great disappointment to innumerable keyboard warriors who fantasize about how many different ways Bergdahl should be executed, preferably while sitting in Barack Obama's lap. It's really inspiring to see the same folks who insist that we must support the troops turn around and insist that some of the troops don't deserve to come home.

The decision to try Bergdahl in a general court-martial could result in a far harsher sentence than originally recommended by an Army investigator, who had called for Bergdahl to face the equivalent of misdemeanor charges in a civilian court.

According to Sergeant Bergdahl’s defense lawyers, the Army lawyer who presided over the preliminary hearing also recommended that he face neither jail time nor a punitive discharge and that he go before an intermediate tribunal known as a “special court-martial,” where the most severe penalty possible would be a year of confinement.

Despite all the emails you've received from your crazy uncle insisting that six or eight or a dozen soldiers died while searching for Bergdahl, that's not the case, according to the Army investigator, Gen. Kenneth Dahl, who testified during Bergdahl's initial hearing "that no troops had died specifically searching for Sergeant Bergdahl." Donald Trump is especially fond of that lie, and also of calling Bergdahl a traitor who deserves to be shot. Following the Army's decision Monday to court-martial Bergdahl, his lawyers issued a press release calling on Trump to "cease his prejudicial monthslong campaign of defamation against our client," which is the sort of polite request that we can expect Trump to bring up at his next campaign rally, perhaps by arguing that Bergdahl's lawyers should be shot, too.

Bergdahl's story is the focus of the new season of public radio's documentary series Serial, which features recordings of Bergdahl discussing his case with filmmaker Mark Boal; in the first episode, Bergdahl claims that his goal in walking away from his post was to walk to another base about 18 miles away, in hopes that the fuss over his going missing would give him the chance to draw attention to what he considered poor leadership in his unit. We're thinking maybe a sternly worded letter might have been a better idea -- perhaps even one that would go into his Permanent File! Or maybe one of those big ugly puppets that always show up at European environmental protests.

While Serial is getting Bergdahl's side of the story into the public, a former military attorney, Eric Montalvo, told the Christian Science Monitor that the podcast may have prompted the military to seek harsher punishment for Bergdahl, even though the story he tells to Boal is the same that he told Gen. Dahl during the Army's investigation.

“There are certain basic rules in defense. The first and most important rule is that the client just needs to be quiet,” says Mr. Montalvo [...]

“When [Berghdahl] says words to the effect of, ‘I did it because’ – well, you’ve just said you did it,” he adds. “We don’t care why you did it, buddy – the crime is that you did it.

While an Army Forces Command spokesman told the New York Times that the Serial story had no effect on the timing of the Army's announcement or the potential severity of the charges, Montalvo said that the podcast will probably cook Bergdahl's goose:

“If I were the prosecutor and I heard that, I’d be in no-brainer mode. All I have to do is roll that beautiful ... footage, and we’re done. He had a plan, and he executed on that plan.”

We've listened to the first installment of Serial, and Bergdahl comes off as something of an idealistic idiot -- he says he had a terrific idea to call attention to what he considered dangerously poor leadership in his unit, but he alsorecognized about 20 minutes into his nighttime walk into the desert that he hadn't made an especially smart plan:

[contextly_sidebar id="B8ieZebGH5NLKpVoHjkVb7aQ3ScOn2L1"]Bergdahl doesn't sound like a traitor or a defector. He sounds like a doofus with delusions of grandeur, who had no business being in the military. Remember, of course, that he was discharged from the Coast Guard in 2006 for "psychological reasons," which should have disqualified him from joining the Army in 2008, but by that point they were taking almost anyone with a pulse, including a confused Idahoan who fancied himself a character out of an Ayn Rand novel. Here's hoping his lawyers can get him a plea bargain -- perhaps something like "naïve dumbshittery before the enemy."