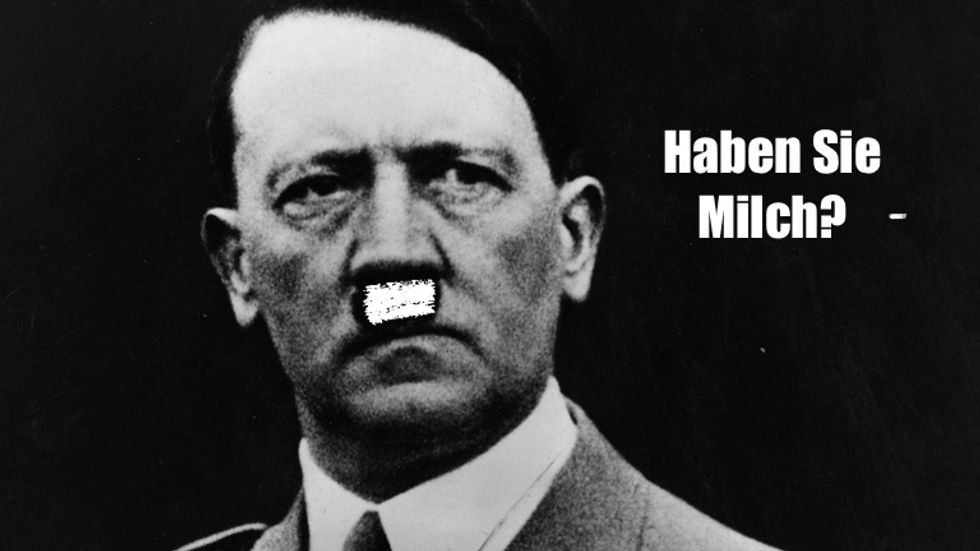 Scientific racism has a long and incredibly stupid history. Once upon a time, the great scientific racists of the day were super obsessed with the shape of people's heads, and how Anglo-Saxon people had head-shapes that made them genetically superior and better and smarter than everyone else. Then there was noted American physician Samuel Cartwright, first to diagnose the conditions of drapetomania -- a serious mental illness that caused slaves to want to flee captivity -- and dysaesthesia aethiopica, a condition present in black people that causes them to not feel pain and be lazy. And who among us can forget Charles Murray and The Bell Curve -- the book that explained that white people have the best IQs, so often cited by people not swift enough to know how many times it has been discredited.

Today, we have Nazis demonstrating their "racial purity and superiority" by drinking gallons of milk, in order to show off how totally not lactose intolerant they are.

On Donald Trump's Inauguration Day, actor Shia LaBeouf set up an anti-Trump art project outside the Museum of the Moving Image in New York City, titled "He Will Not Divide Us." It's an ongoing livestream meant to run for the next four years and be a "show of resistance or insistence, opposition or optimism" in the age of Trump. People were supposed to go up to the camera and say "He Will Not Divide Us," but that didn't quite work out as planned.

The installation is closing today on account of the fact that the livestream has been repeatedly taken over by actual Nazis, creating a "serious and ongoing public safety hazard for the Museum, its visitors, staff, local residents, and businesses."

One such incident occurred last Friday night, when a bunch of Neo-Nazis gathered shirtless before the camera to shout racial obscenities... and chug gallons of milk.

Why are they drinking all that milk? Why, to show off their glorious racial superiority and purity, of course! Also because they are gross. While not as gross as being an actual Nazi, chugging milk is maybe one of the most nauseating things imaginable.

As Jack Smith IV explains at Mic, the Neo-Nazis believe that because lactose intolerance is less common among people of Northern European descent, that drinking a bunch of milk is a great way to show off the fact that they are super great at being white people.

This belief is particularly popular on 4chan, where all the internet's smartest Nazis hang.

This theory goes back at least to 2003, as indicated by a post on the Stormfront message board:

And apparently it comes up a lot!

Also, too, Smith notes that Nazis are now using the term "vegan agenda" as a new catch phrase:

Judging from the eugenicist rhetoric across online hate speech communities like 4chan and 8chan, it appears that the "vegan agenda" is a potential proxy term for conspiracy theories about a globalist Jewish agenda. But given the sheer mass of alt-right accounts spewing out calls of "Down with the vegan agenda," it could refer to any number of right-wing targets.

The real question here is -- exactly how bored and sad are these people? Sitting around, chugging milk, thinking that it makes them special somehow? Congratulating themselves on producing lactase enzymes and imagining that it makes them genetically superior... It would practically be tragic if they were not actual Nazis.