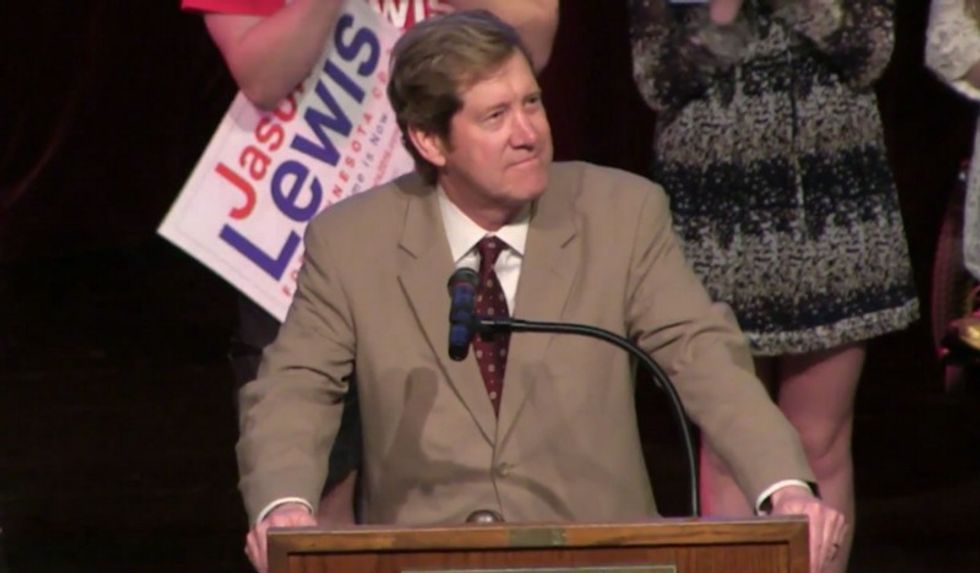 Minnesota Republicans chose a real winner in their primary for Minnesota's Second District: a former talk-show host, Jason Lewis, who among other achievements founded a social network for Ayn Rand fans, argued that the federal government probably couldn't legally outlaw slavery, thinks young women are too dumb to vote, and worries white Americans are on the road to extinction because they aren't making enough babies. The district tends to vote Democratic, so Democrats who dream of taking back the House of Representatives are no doubt trying to suppress their grins.

Let's just review some of Lewis's greatest hits, shall we?

On slavery and the civil war, Lewis claimed in his 2011 book, Power Divided Is Power Checked: The Argument for States' Rights, that the federal government probably didn't have the power to outlaw slavery, and of course that the Civil War was a fight over states' right to secede, not really about slavery. Hey, Dinesh D'Souza, looks like we found a Republican who's OK with slavery! As long as it's implemented by the states, not the federal government, at least. When he was asked in a 2011 Daily Caller interview if the Civil War had been worth fighting, he talked around the question a bit and finally decided it was "kinda hard to say."

Then after the Supreme Court legalized same-sex marriage, Lewis released an updated version of the audio version of his book, to keep up with new developments, in which he compared marriage equality to slavery, because Logic:

Sadly, that quote is occasionally truncated by evil liberals to leave out the comparison to gay marriage, to make it sound like Lewis is such a libertarian that he'd allow slavery -- such was the version we first encountered in fact. But no, he's not a pro-slavery monster. He's more of an anti-gay monster who makes really stupid, illogical analogies. If Mr. Lewis needs help understanding the difference between allowing two people who love each other to marry and one person owning another human being as property, we'd be happy to explain in detail. Or maybe Angie Craig, his very happily lesbian-married Democratic opponent, could explain that to him in a debate.

Lewis just isn't into the idea of the federal government deciding who has rights and who doesn't; as the Minneapolis Star-Tribune explains,

Lewis later said "social decisions" should be left "to the collective wisdom of the states and the people. Because the courts are not smart enough to know what the answer is."

In 2009, while filling in for Rush Limbaugh, Lewis explained that the problem after Hurricane Katrina wasn't the bungled federal response. No, not at all! Most REAL Americans "think the mistake was a bunch of whiners down there. They don't think we did too little in Katrina, they think people did not help themselves!"