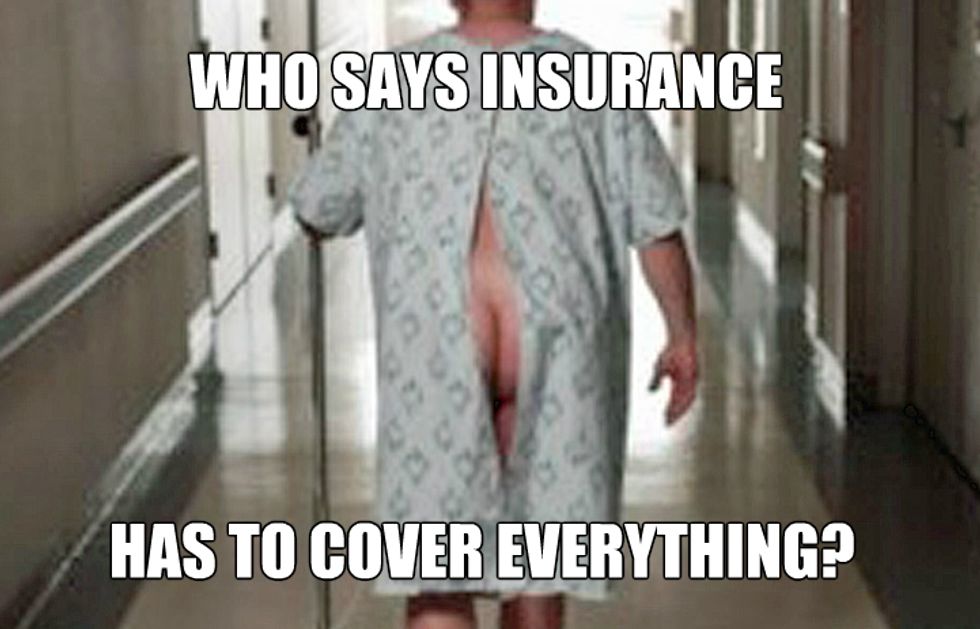 Accurate representation of Minnesota bill would be NSFW

So now that the Republicans are all set to repeal and replace Obamacare -- or not -- with something that will cover everyone -- or not -- here's a little vision of the free-market future that could be on the way! The Republican-controlled state House in Minnesota has passed a bill that would allow health insurers to sell policies that are free from just a few of the burdensome coverage requirements currently mandated by the Affordable Care Act, and once these little extras no longer have to be covered, you can bet insurance will get a lot cheaper. Here's the list of items that insurance companies would no longer be required to cover, once the ACA is repealed, courtesy of Democrat Lindsey Port, who ran unsuccessfully for the state House last fall:

You betcha: If this thing went into effect, you could buy health insurance in Minnesota that excluded coverage for costly stuff you don't need. Like diagnostic tests or cancer treatment. Or Emergency services. Or much of anything. In essence, it would allow a return to the good old days of "Junk Insurance" policies that had low premiums, low deductibles, and didn't cover hardly anything. But they were inexpensive, and by golly, those were the policies you couldn't keep when Obamacare went into effect.

And it's a preview of the glories of keeping costs down by allowing people to buy insurance policies across state lines -- if the bare-bones coverage that this Minnesota bill would provide still cost too much, you could go buy your insurance in some state that doesn't require insurance policies to cover, say, "doctor visits." Just think how much you'd save on insurance, unless of course you actually needed insurance!

It's unclear whether the bill would pass the state Senate, where Republicans only have a one-seat majority, and it would certainly be vetoed by Democratic Gov. Mark Dayton, who just had his own health scare yesterday -- he passed out while giving his state of the state address, and while he's back at work today, he revealed that he was diagnosed with prostate cancer last week. Oh, look at item 22 on the list of things insurance companies wouldn't have to cover: "Prostate cancer screenings."

Republicans, especially Paul Ryan, have been talking a lot about replacing the ACA's mandated coverage for health services with promises of "access" to health insurance (everyone who can afford it can buy it!), and making policies "affordable" by "cutting burdensome regulations." This list is just one hint of how they hope to achieve that noble goal. Have you called your Senators and Representative yet to politely let them know you want the ACA repaired, not gutted? You'll want to do that.