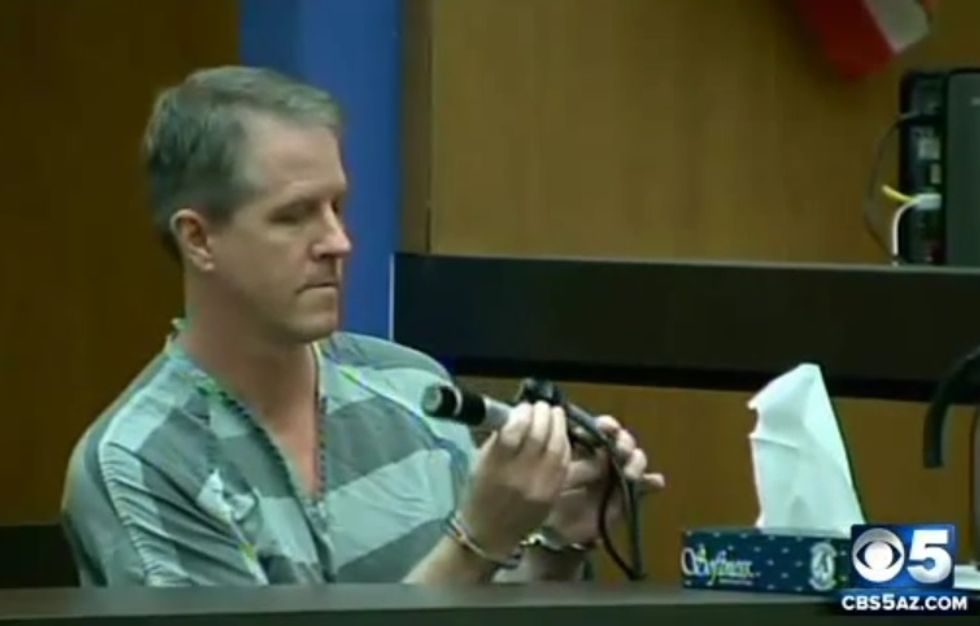 We sure do like the Constitution a lot, even the parts that apply to Very Bad People -- count us with the knee-jerk liberals who think that even terror suspects deserve their Miranda rights and their day in court, not indefinite detention. But Jebus H. Chrysler on a nuclear pogo stick, the judge's application of the 6th Amendment in an Arizona child molestation case sure stinks: the defendant, who's representing himself, may be allowed to cross-examine the little girls, aged 7 and 8, whom he's accused of molesting.

The defendant, Chris Simcox, is a co-founder of the Minuteman militia group, that brave group of patriots who take it upon themselves to patrol the border to keep out all the Mexican rapists that Donald Trump is so worried about. But apparently sometimes even great patriot heroes make mistakes, and Simcox is accused of molesting two little girls in 2013, when they were aged 6 and 5. Maricopa County Superior Court Judge Jose Padilla ruled in April that Simcox could cross-examine the girls, but the state Supreme Court accepted an emergency petition to put the trial on hold until it decided whether the girls would be harmed by having to answer questions from their alleged molester; while an appeals court referred the question back to Padilla's court in May, the state Supreme Court Court appears not to have decided whether to intervene.

In April, Judge Padilla ruled that he could not accept as evidence a letter from the mother of one of the victims; she described her daughter as happy and well-adjusted before the molestation, but said that the girl is now traumatized:

“She now has nightmares and does not fall asleep without complaining of her stomach hurting. She also complains of being ‘sick’ when I have to leave her. She does not sleep through the night and most nights she finds her way into my room, even though she has her own room and bed. She worries about the doors being locked and asks over and over if they have been secured.”

Padilla denied the request to have the girl questioned by a court-appointed attorney instead of Simcox, explaining that the letter was of little worth as evidence: “With all due respect,” he said, “[the mothers] are simply not qualified to make that assessment.” Yeah, where are your credentials, lady?

The trial process ground forward a bit Tuesday, when Simcox was allowed to question the mothers of the two girls in a hearing to decide whether he would be able to question the girls directly, as theArizona Republic explains:

[Padilla] agreed to Tuesday's hearing after a string of prosecutors' appeals and under a narrow set of guidelines: Prosecutors would have to present evidence that the girls would suffer more harm if Simcox personally questioned them than the already-harrowing experience of testifying in trial with a different defense attorney.

Prosecutors introduced three witnesses: Gail Goodman, a psychology professor at University of California-Davis and an expert on child witnesses, and the mothers of the two girls named as victims.

Goodman's testimony gives a pretty clear sense of just how bizarre Simcox's insistence on being allowed to question his alleged victims is:

Goodman testified that there are indicators that Simcox's questioning would damage the accusers. A child's key fears when testifying in court is the cross-examination and seeing the defendant, she said, adding that combining the two would be a "double-whammy."

But she acknowledged that there was no hard evidence to show that the experience would prompt further harm.

"It happens rarely enough researchers have not been able to study it," she said. "In many countries, it's not even allowed."

Maybe Judge Padilla is thinking we should give it a whirl and see if the girls actually are traumatized. By being subjected to detailed questions about their molestation from the man accused of molesting them. It'll be a learning experience for everyone. After all, the moms aren't experts on whether the kids are traumatized, and even the expert witness says there's little evidence because no place else is insane enough to let an accused child molester question his victims. Where better to work that out than Arizona?

The hearing will continue on July 23.