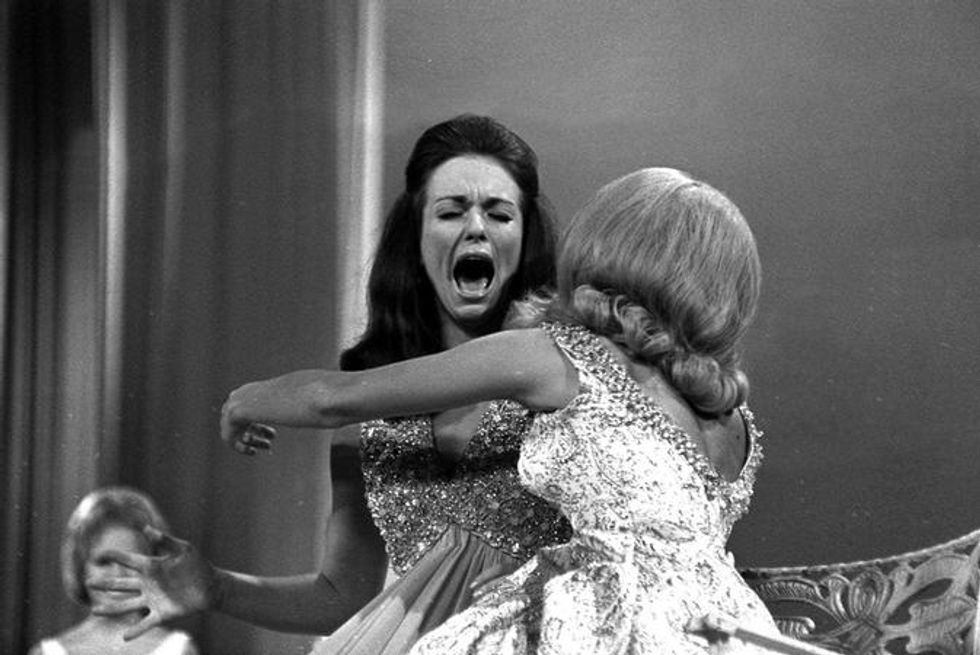 Last week, Huffington Post writer Yashar Ali published an exposé on the leadership of the Miss America pageant that resulted in the resignation of its CEO, its president and COO, and two additional board members.

The article included a series of incredibly creepy emails between CEO Sam Haskell and various board members in which some former Miss Americas were called "cunts," others were fat shamed and otherwise degraded. Upon the death of one Miss America, Haskell wrote that he "wished it were Kate Shindle" -- a former Miss America who wrote about her own (bad) experiences in the pageant -- and who by the way was very good when I saw her in Cabaret. He also had issues with former Miss America Gretchen Carlson, who was a board member at the time, because she refused to aid him in a smear campaign against Shindle. Sometimes, we guess, Gretchen Carlson has her moments.

Perhaps Haskell's most vicious vendetta, however, was against 2013's Miss America, Mallory Hagan. He slut shamed her, dragged her when she "gained weight" after the pageant, and suggested that the only career in her future was as a Macy's Thanksgiving Day float.

This is what Hagan looked like at that time, in which she appears to have gained maybe five pounds since receiving the crown. Haskell sent the picture to Miss America President Josh Randle -- who also resigned amid the controversy -- writing “Look at MH in this photo...OMG...Why does he want that?”

Randle responded, “She’s a healthy one!! Hahaha.” He of course meant "healthy" as an insult. Because it is, of course, far sexxxier for a woman to be un-healthy. You know, like back in the Victorian era when all the ladies were trying to look like they had tuberculosis because it was so glamorous.

Haskell was also very upset about Hagan dating another Miss America employee, Brent Adams -- the "he" referred to in his email to Randle. Why? Because Haskell sought to push Adams into an arranged marriage with his daughter, Mary Lane.

Adams recalled an encounter with Haskell at his home in which Haskell attempted to convince Adams to break up with Hagan and instead date his daughter. Haskell stretched out his arms and told Adams, “All of this can be yours,” ostensibly referring to his Oxford mansion and the family’s money.

“You don’t need a piece of trash like Mallory. You need someone with class and money like my daughter,” he said, according to Adams.

Since the article was published, both Haskell and board member Lynn Weidner (among others) have stepped down. Which is good, although it might be time for something a little more radical.

Let's be real. The Miss America pageant was weird and outdated when I was a kid, and it's even more weird and outdated now. Sure, the pageant is not nearly as grotesque as Donald Trump's Miss USA/Miss Universe -- which by the way was literally founded because the very bad ass Miss America 1951, Yolande Betbeze, refused to promote a swimwear line that sponsored the pageant, saying she was an opera singer, not a pin-up girl. Miss America is supposed to be the "classy" pageant. The one that's supposed to really be about the scholarships.

But it's still weird and outdated. It's uncomfortable. It seems... incredibly unnecessary.

As great as it is to give out scholarships to women, it would be nice if those scholarships were not given out on the basis of how hot those women look in their swimsuit areas. It would be great if one of the requirements for the pageant was not "never having been pregnant" or, even more oddly, never even having adopted a child. It would be great if it, like pretty much everything else in most people's lives, did not involve wearing a fancy bedazzled evening gown.

If this is such a great way to earn scholarships, why don't we have one for men? In fact, this is one of the few instances in my life in which I will say "But what about the men?" and mean it. Why are we reserving this fabulous privilege for women? I say we get 50 men up there to prance around in sexy bathing suits, answer complicated questions about foreign policy in 20 seconds or less, and then twirl some flaming batons just like Miss Georgia World 1976, Miss Suzanne Sugarbaker.

Because I would watch that. But we would never have such a pageant -- even if it offered the most fabulous scholarships in all the world. Because it would never occur to anyone that looking good in a bathing suit ought to be a requirement for men to do anything other than being a bathing suit model.

Even though the amount of money the Miss America pageant says it gives out to women is far less than what it actually gives out, it is still, as it claims, the number one provider of scholarships to women in the world. That is a very, very depressing thought. What does that say to young girls when, hypothetically, the best way for them to get a scholarship may be by presenting themselves like a slab of beef to be judged for how they look?

Kate Shindle and Gretchen Carlson, who were both dragged in the emails, are now calling for the pageant to be controlled by women. While this is not the worst impulse, two of the board members who resigned were Lynn Weidner and Tammy Haddad -- both of whom were female. (Haddad, the Washington power broker, comes across as particularly viperish and cartoonishly evil.) Having seen my fair share of Toddlers and Tiaras, I'm not convinced this would have a particularly strong impact on anything. This might just be a situation in which no one who is not horrible, regardless of gender, would even want the job in the first place.

Despite our gross, pageant-owning president, Miss America and other beauty pageants represent something that just doesn't jive with who we are as a country anymore. It's uncomfortable and old-timey, and it doesn't even make for particularly interesting or compelling television unless someone publicly humiliates themselves. Maybe it's time to just let it go, let it catwalk off into the damned sunset.

Heeeeeere it is, Wonkette's money ask (please sing that to the tune of the Miss America theme and CLICK HERE TO TIP US)