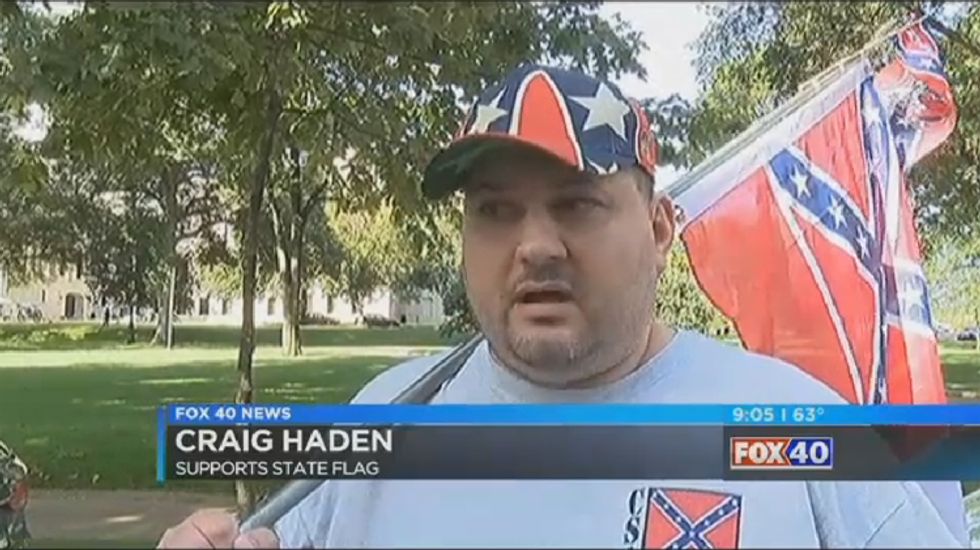 You might recall that after South Carolina started talking about taking the Confederate flag down from its statehouse grounds, a whole bunch of other states also got rid of their official displays of the Scar-Strangled Banner, too. Walmart cleared its shelves of Confederate items, and even the Republican speaker of the Mississippi House, Philip Gunn, said it was time to take the Treason Flag off the state's flag, where it was added at the end of Reconstruction as a subtle reminder to the state's citizenry of who was really running things, y'hear? And while Gunn's suggestion hasn't resulted in legislation yet, a proposed amendment to the state Constitution that would revise the flag is gaining support; about 400 people marched in front of the Mississippi Capitol Sunday to call for "one flag for all" Mississippians. Also, too, three counter-protestors showed up to wave their sad treason banners and mutter about heritage. But darned if one of those Heritage-Not-Haters didn't come up with a really SMRT defense of keeping the state flag as it is: Changing it just might be anti-Semitic!

Now, sure, the attention mostly went to the big celebrity speakers, like civil rights icon Myrlie Evers-Williams, who pointed out that Robert E. Lee refused to display symbols of the Confederacy after the South fell, and that 150 years later, it might be time to follow his example, saying, "If a former Confederate general recognizes the divisiveness of a symbol of disunity, we must do so, also." South Carolina state Rep. Jenny Horne, wearing a pin remembering her colleague, Clementa Pinckney, who was murdered in the Charleston church shootings, called on Mississippi to get its act together, take the Confederate flag off the state flag, and enjoy the return of business that's been staying away thanks to the hate symbol.

"It is a new South," she said. "The economic development opportunities that Mississippi is missing out on — you don't even know it, but it's costing all citizens jobs."

Oh, but all that's just a bunch of common sense and moral suasion. How about the arguments for keeping the flag? Thanks to the intrepid reporting of WLBT-TV, we have some Prime Idiot for you from Confederate flag supporter Craig Haden, who explained why revising the flag is probably really going to offend the Jews:

If they’re offended I question their motivations because the blue in the Confederate battle flag represents St. Andrew who was an apostle of Jesus Christ and he was Jewish and makes me wonder if they’re anti-Semitic.

Now that, there, is some amazingly convoluted trolling. You say this flag's racist? Well I say removing this flag would be anti-Semitic, so how about that? What do you have against the Jews, that you would want to impugn this fine symbol commemorating St. Andrew, the important Jewish figure? Next you'll say you're against the practice of cross-burning, in which proud Judeo-Christians set ablaze a symbol mourning the killing of Jesus, who was a Jew, so that all might see by its light. You anti-Semitic bigots make Mr. Haden sick, you really do.