Mississippi So Glad Racism Over So It Can Celebrate Confederate Heritage 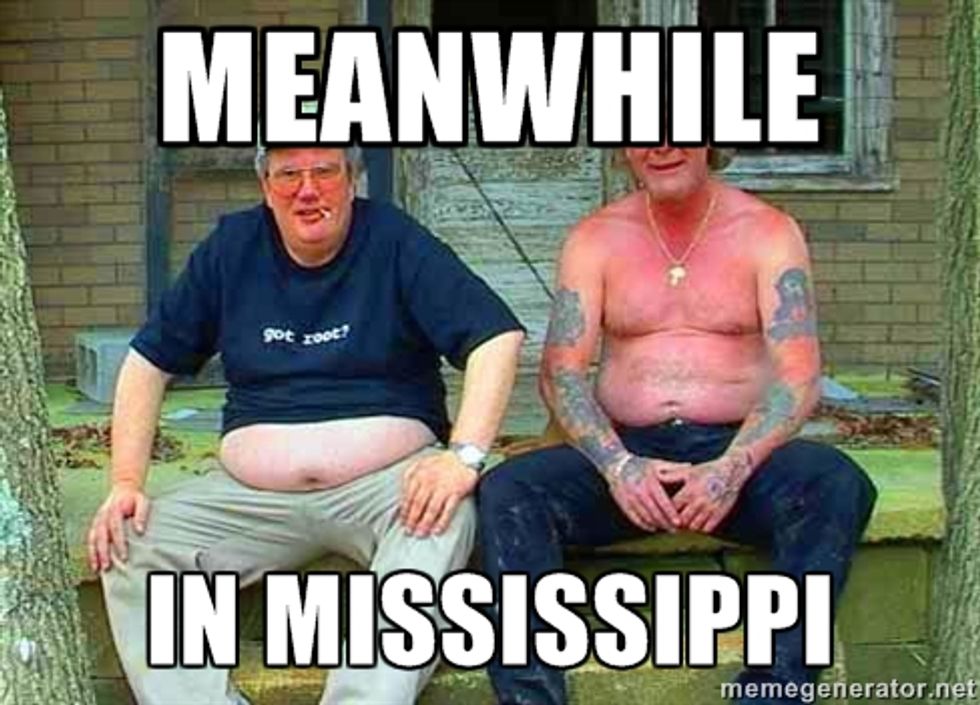 Important to keep their heritage alive.

Whoa hey, what's up, Mississippi, down there near where yr Wonkette lives? Everything going well and you're not being racist at all? Good job! We're glad to hear you solved that little problem because otherwise this might be disturbing:

A proclamation from Mississippi Gov. Phil Bryant declaring April as "Confederate Heritage Month," is one that has appeared online in previous years, and similar to ones issued by previous administrations, a spokesman said.

Bryant's proclamation appears on the website for the Mississippi division of the Sons of the Confederacy, but not on the governor's official proclamation page, as reported by the Jackson Free Press Wednesday. The governor's site allows users the ability to request proclamations. [...]

"Like his predecessors -- both Republican and Democrat -- who issued similar proclamations, Gov. Bryant believes Mississippi's history deserves study and reflection, no matter how unpleasant or complicated parts of it may be," [Bryant's chief of communications Clay] Chandler said. "Like the proclamation says, gaining insight from our mistakes and successes will help us move forward."

For the record, Bryant signed the proclamation in February, and it made the local news, but now that it is April, there is much more of an OUTCRY happening.

And why? Because this is some bullshit, starting with how "we've always done it this way" is the most Southern-est, most dumbfuckin-est argument ever to torpedo out of Dixie's asshole. Oh, and the part about how it was posted on the website of a known white supremacist hate group.

[wonkbar]<a href="http://wonkette.com/599063/mississippi-to-stay-wrapped-in-warm-embrace-of-confederate-flag"></a>[/wonkbar]And the part about how, even after Confederate flags set their own sorry flag asses on fire all over the South last year, in the wake of the Charleston murders, Mississippi is still clinging to the Confederate battle emblem on its state flag, which must be a relief to all the white Mississippi racists who can't even imagine what it'd be like to screw their sisters without the rebel flag tied on their backs like capes.

And the part about how Mississippi is a state that celebrates Robert E. Lee day and Martin Luther King day the same day, because how is it even fair otherwise?

Oh maybe we are being too mean and misjudging the governor's motives. Let's look at his proclamation.

WHEREAS they have to suffer through the indignity of Black History Month in February and WHEREAS March is kinda rainy and cold, NOW, THEREFORE, April is when they get to have fun bein' white again, HOTTY TODDY GOSH ALMIGHTY!

For real though, that fourth "whereas." It seems to be missing something:

WHEREAS, it is important for all Americans to reflect upon our nation's past, to gain insight from our mistakes and successes, and to come to a full understanding that the lessons learned yesterday and today will carry us through tomorrow if we carefully and earnestly strive to understand and appreciate our heritage and our opportunities which lie before us.

Boy howdy that is some flowery horseshit that somehow doesn't include the phrase, "Slavery was bad, y'all."

Anyway, like we said, we are very glad all the racism is over so Mississippi can have nice things like White Heritage Month and OH HEY, WHO'S THIS GUY?

A Mississippi RV park owner evicted an interracial couple because of the color of their skin. [...]

More than a half-century after the Civil Rights Act of 1964 barred discrimination on the basis of race, Gene Baker acknowledged asking the interracial couple to leave his RV park in Tupelo.

Baker, who lives in Aberdeen, said he only did it because “the neighbors were giving me such a problem.”

He added that they don't cotton to "that black and white shacking" at his church and he just seems real nice, bless his dumbass heart.

Oh, Mississippi. You're 50th in the nation in just about everything, but no reason to change your pathetic, racist ways now, we guess. You've always done it that way.