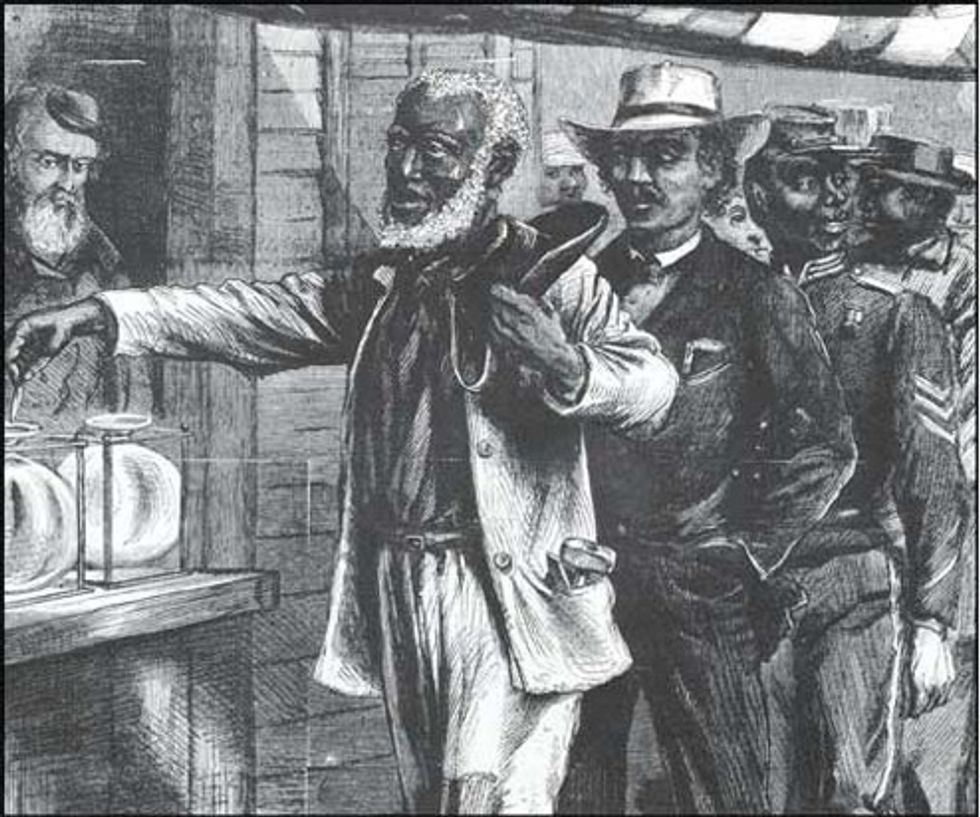 Tomorrow is the runoff election for theGreat Mississippi Ratfuck -- aka the Republican Senate Primary -- between Terrible Old Clueless Thad Cochran and up-and-coming neoconfederategrifterweasel Chris McDaniel. Needless to say, it's managing to remain horrible right up to the very end! In an effort to get someone, anyone to vote for him, Cochran has been reaching out to black voters, and so McDaniel supporters are getting ready to march to the polls to protect them from interfering Democrats who shouldn't be messing with a Republican primary -- even though it's an open primary, and the only people disqualified from voting in it would be those who already voted in the Democratic primary. Mind you, it's not about race, because it is never about race.

Former Virginia A.G. Ken Cuccinelli, who's taking a little time off from selling shoot-unarmed-black-kids insurance to ground-standers so he can head the Senate Conservatives Fund, tells the New York Times that it's all about fairness:

The laws in Mississippi are unusually open to poll watching from the outside. We're going to take full advantage of that and we're going to lay eyes on Cochran's effort to bring Democrats in. And of course, if they voted in primaries, that's illegal.

Not that there's anything racial about any of that, because the murders of Chaney, Schwerner, and Goodman were a whole 50 years ago, and there's no reason to think that Mississippi would ever encourage intimidation of black voters after all this time, or that there might be anything the least bit coded in the language of McDaniel supporter Sue Barnett, who "suggested that Cochran's campaign had hired a community organizer to pay blacks to show up at the polls on Tuesday." Now please excuse us for one moment while we attend to our dog, whose ears appear to be in great pain.

Just about anyone can volunteer to watch the polls, and the Senate Campaign Fund is being joined by civic-minded folks from Freedomworks and Tea Party Patriots to do just that, but they'll need McDaniel's authorization to actually challenge votes. Still, it's nice to know that so many patriots are willing to keep an eye on the polls just to make sure everything's on the up-and-up. Besides, McDaniel said last week that the poll-watching effort "has nothing to do with [black voters] — this is about liberal Democrats," so just you shut up with your race card, you community-organizer-lovers, you. We have a feeling that some of these fine patriots usually spell "community organizer" with two "g's."

In the meanwhile, here's a reminder that BOTH SIDES DO IT: while McDaniel supporters look forward to watching The Blacks very carefully, a Cochran staffer was arrested over the weekend for stealing McDaniel yard signs. The Cochran campaign immediately fired the staffer and proudly announced, "Unlike McDaniel, we do not tolerate this kind of behavior." It is not known whether the statement was followed by an audible "Harrumph."