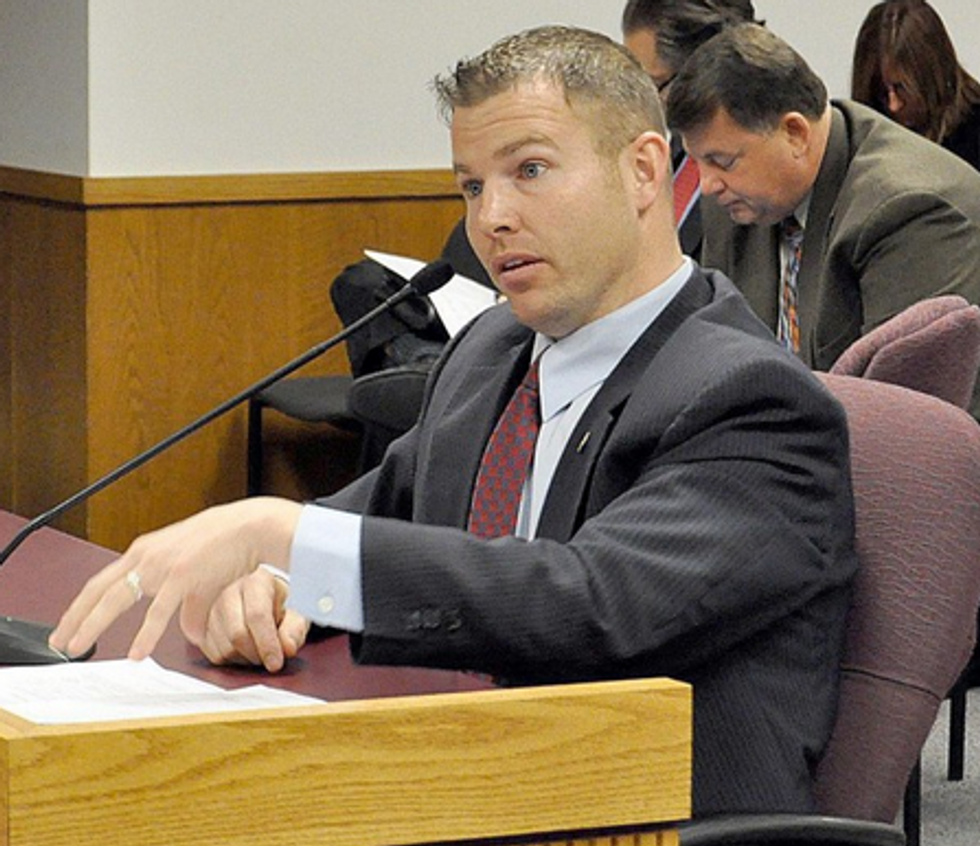 Missouri state Rep. Rick Brattin is at it again, addressing the the Real Problems affecting his state. Last year, he made news for a bill that would simply require ladies to get permission slips from the men what had made them pregnant, if they wanted all the 'bortions. If it was rape, he said that as long as the woman proved it, then there would be an exception, so no worries! He's also a proponent of the completely ineffective and pointless effort to force welfare recipients to have drug tests. Which brings us to today! Brattin has decided that on top of making sure all the poors aren't on drugs, we should probably make sure they don't eat any "luxury" foods, like fish, because heaven forfend they make healthy choices. Those are for rich people!

They say if you give a man a fish, he'll eat for a day. But teach the man to fish, and you will feed him for a lifetime.

Some Missouri lawmakers have seemingly taken the old saying and distilled it down to its most reductive lesson: Don't give fish to poor people.

Indeed, there does seems [sic] to be something a bit twisted in Republican Representative Rick Brattin's House Bill 813, which would bar Missouri's roughly 930,000 food-stamp recipients from using their government payouts to buy seafood. The bill would also ban energy drinks, soda, cookies, chips and steak.

Oh, that is not what it is like? Our bad.

Reading the list of banned things in the bill, we can see that part of this stems from the drive to control what poor people eat by banning unhealthy things, even though Republicans also think government should not tell people what to eat, because that is tyranny, at least when Michelle Obama does it. Part of the reason people receiving food stamps end up eating crap food is that crap food is processed and cheaper. The rest of the bill, where it bans fish and steak, is out of a desire to make sure poors never have nice things, ever. If they wanted nice things, they shouldn't have made themselves poor! Instead they'll have to stick with canned tuna fish. Oh wait, as the bill is written, that may be out the window too (because state reps are SO BAD at writing bills, Jesus Christ).

According to an expert interviewed for the article, the best way to address the food needs of people on public assistance would actually be to EXPAND their choices, imagine that:

"There's a long history of trying to dictate what somebody should be buying on food stamps. The program itself has been really stigmatized," says Washington University professor Mark Rank, who authored Living on the Edge: The Realities of Welfare in America.

While some restrictions on food stamps benefits make sense, Rank says banning seafood is a hard to justify. There's just no data, he says, to suggest Missouri's poor are using their electronic benefit cards to gorge on lobster.

"There have been a lot of studies on fraud, when there were actually people buying, trading and selling their EBT cards, but it was a very small percentage of the overall population," he says. "But fish is good for you -- why should that be prohibited?"

Instead, Rank points to solutions that increased food choices, such as allowing welfare recipients to use their EBT cards at farmers' markets. More nutritious options, he says, will go much further in improving diets than laws that merely reinforce paternalistic "concerns" over what poor people are and are not eating.

Ha ha, it is because Rick Brattin and his Republican cohorts actually do not care about whether the food is healthy, this is just Republicans being fucking dicks. Conservatives really do believe their own garbage about how poor people are just living high on the hog, calling everybody on their Obamaphones to brag about all the free shit the government gave them that day, while Real Americans (read: white, middle-class, conservative) are having to work so hard just to get by. We understand that Republicans get votes by seeding this narrative to their idiot voters, but it's kinda sad that state level representatives like Brattin actually seem to believe it.