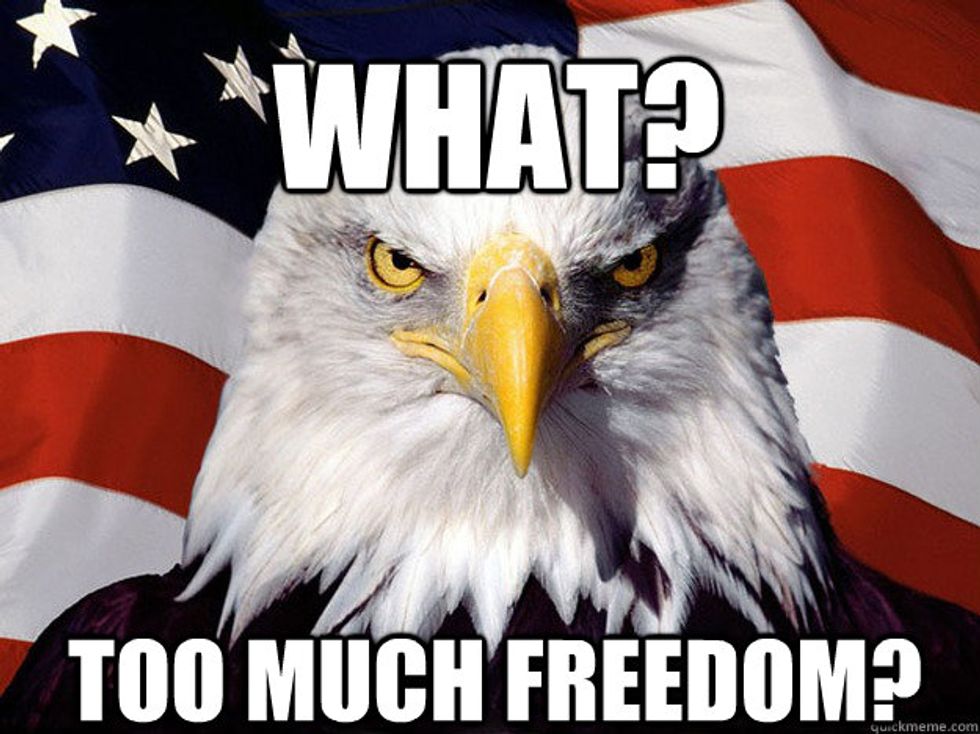 Republicans in the Missouri State Senate are the latest to jump on the trendy new thing where Small Government Conservatives blather on endlessly about the sanctity of states' rights and local control, and then turn around and pass state laws to prevent towns and cities from passing laws that might differ from Republican policies. If they have their way, local governments will be prohibited from setting their own minimum wage, as well as from restricting use of plastic bags, and maybe other stuff as well. Because freedom and local control are beautiful, except when they aren't.

If the Missouri law passes, the state will join such other conservative bastions of some-freedom as Maine, where Gov. Paul LePage wants to stomp out local minimum-wage hikes; Texas, which is dead set against local bans on fracking, plastic shopping bags, and pretty much anything that might protect the environment; and almost-but-not-quite Minnesota, where the Republican-controlled House wants to cut the minimum wage for tipped workers and also ban local minimum wage laws, but where a sane Democratic Senate and governor are just rolling their eyes, laughing, and saying "No way, you hosers."

In Missouri, the bill originally started out as a House proposal to prevent municipalities from banning plastic bags, which are apparently now the hottest avatars of freedom and personal choice in the Conservasphere. It was introduced by a guy who was the head of the Missouri Grocers Association, and who obviously had nothing but consumer rights and freedom in mind. As it made its way through the House and Senate, other restrictions on troublesome local control got tossed in, like the ban on municipal minimum wage increases. At one point, another legislator added a provision that also would have prohibited local authorities from telling employers that they can't ask job applicants whether they have a criminal record; that bit was eventually stripped out, so if the final bill passed by the state House on Wednesday is signed by Gov. Jay Nixon, it will be legal for municipalities to make it easier for former felons to get jobs, but not to require that anyone earn a living wage. So it all balances out, we guess!

"I think it's pretty clear if the United States Congress was going to pass a bill that does exactly what this bill does to local political subdivisions in this state, regarding this exact issue on the minimum wage, people would be outraged," Carpenter said. "And not just the people in here, the people of Missouri, who overwhelmingly passed a higher minimum wage than the federal, would be outraged."

Republicans told him to STFU, because Freedom, which means that if Missouri hopes to attract businesses, it has to make sure that companies won't be burdened by slightly different regulations in different municipalities. It's not about restricting local control, said Rep. Caleb Brown, it's merely a "very needed clarification of where certain decisions need to happen." You know, because Reasons.

Gov. Nixon hasn't indicated whether he'll sign the bill, so there's still the possibility that local governments might be able to continue running wild with freedom and stuff, which can't possibly be what the Founders intended if it results in workers making higher wages.