Missouri Lawmaker Don't Want No Smart Kids Studyin' Up On Abortion, No Siree 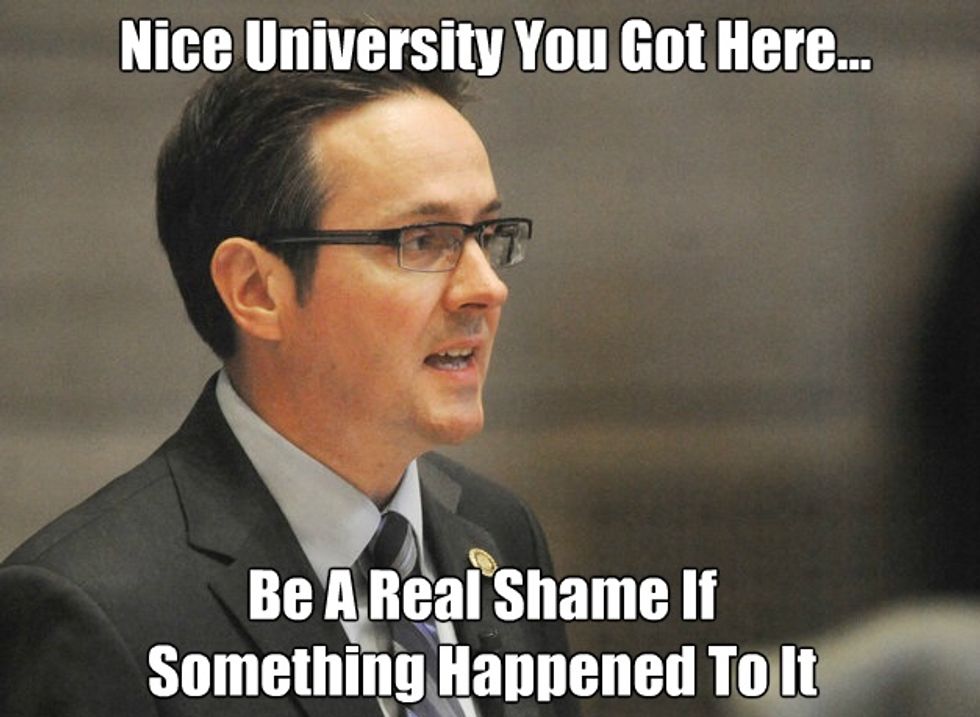 Academic Freedom's just another word for nothin' left to lose. Fine, it's two.

You at least have to give Missouri state Sen. Kurt Schaefer (R-Did We Even Need To Say?) credit for thoroughness and creativity in his efforts to clamp down on all those women who insist on having abortions even though Schaefer knows it's a sin that makes Jesus cry. While the stupid old courts have so far failed to see the wisdom of allowing states to make all abortions illegal forever, Schaefer has launched a new front in the war on reproductive rights: He wants to prevent a graduate student from completing a dissertation on the effects of Missouri's 2014 law requiring a 72-hour waiting period for abortions. As far as we can tell, it's the first time a state legislator has ever tried to stop abortion by directly attacking an individual student's academic freedom, so Schaefer certainly deserves recognition as a pioneer in the field.

Schaefer sent a letter on Oct. 30 to the University of Missouri, warning that a graduate student's research violated a state law barring any publicly funded entity from "encouraging or counseling a woman to have an abortion not necessary to save her life." Lindsay Ruhr, the student, is conducting research at Planned Parenthood to determine what effect, if any, the 72-hour waiting period is having on women seeking services at the state's sole remaining abortion provider.

Schaefer chairs a state Senate panel that sounds like something straight out of The Handmaid's Tale: the "Interim Committee on the Sanctity of Life." He's also running for state attorney general, so he can try to put dangerous criminals -- like professors and grad schools -- in jail. His committee has already pressured Mizzou's medical and nursing schools to drop optional rotations at Planned Parenthood, so no Missouri student will be able to learn how to perform or assist in abortion procedures, and they'll also have fewer options for training in provision of contraception and other women's health services. That's some Sanctity of Life, huh?

The crackdown on Ruhr's research comes in the wake of the national panic over those deceptively edited videos claiming that Planned Parenthood sells black market baby parts at abortion yard sales, although a recent investigation found that Planned Parenthood of Missouri was operating completely within the state's (insane) laws.

In his letter, Schaefer claims that because Ruhr's research is being conducted at Planned Parenthood, and because her dissertation adviser, Dr. Marjorie Sable, is both the director of the School of Social Work and a board member of Planned Parenthood of Kansas and mid-Missouri, the research is obviously "a marketing aid for Planned Parenthood -- one that is funded, in part or in whole, by taxpayer dollars," and therefore illegal since it will make ladies murder their fetuses:

"It is difficult to understand how a research study approved by the University, conducted by a University student, and over seen by the Director of the School of Social Work at the University can be perceived as anything but an expenditure of public funds to aid in Planned Parenthood in improving 'its services to better meet the needs of women seeking abortions' in clear violation of Missouri law," Schaefer wrote.

Schaefer demanded the university hand over all documents related to the approval of Ruhr's research, so he can prove that the university is full of baby-killing enthusiasts or something. Don't be surprised if his next move is to pressure the university to fire Dr. Sable, since she clearly must be encouraging abortions as a Planned Parenthood board member.

Ruhr told Al-Jazeera America that she intends to continue with her research despite Schaefer's threats:

Ruhr said so far she hasn't been asked to curtail her studies. And the university is also making it clear that although it will comply with Schaefer's records request, it remains committed to academic freedom:

"As the state's research, land-grant institution, we must stay committed to the discovery, dissemination, application and preservation of knowledge to support our mission while abiding by state and federal laws," [university spokeswoman May Jo] Banken said in a statement. "We will continue performing life-saving research in our laboratories while providing the highest quality of educational opportunities to our students."

Banken also pointed out that while Ruhr is seeking a PhD at the university, she is employed by Planned Parenthood and the university is not paying for her research. In essence, even though no state funds are going to pay for the research, Schaefer is trying to stomp on academic freedom because the study might come up with findings that the "Committee on the Sanctity of Life" might not like -- which obviously makes it illegal for the University of Missouri to grant a doctorate to the researcher.

Welcome to rightwing "Liberty" in 2015, kids. Why don't you social workers go study something nice, like how hard work will make families prosperous, especially if they have as many children as possible? While we're at it, does Mizzou even need a School of Social Work? That sounds an awful lot like it's promoting socialism and welfare dependency.