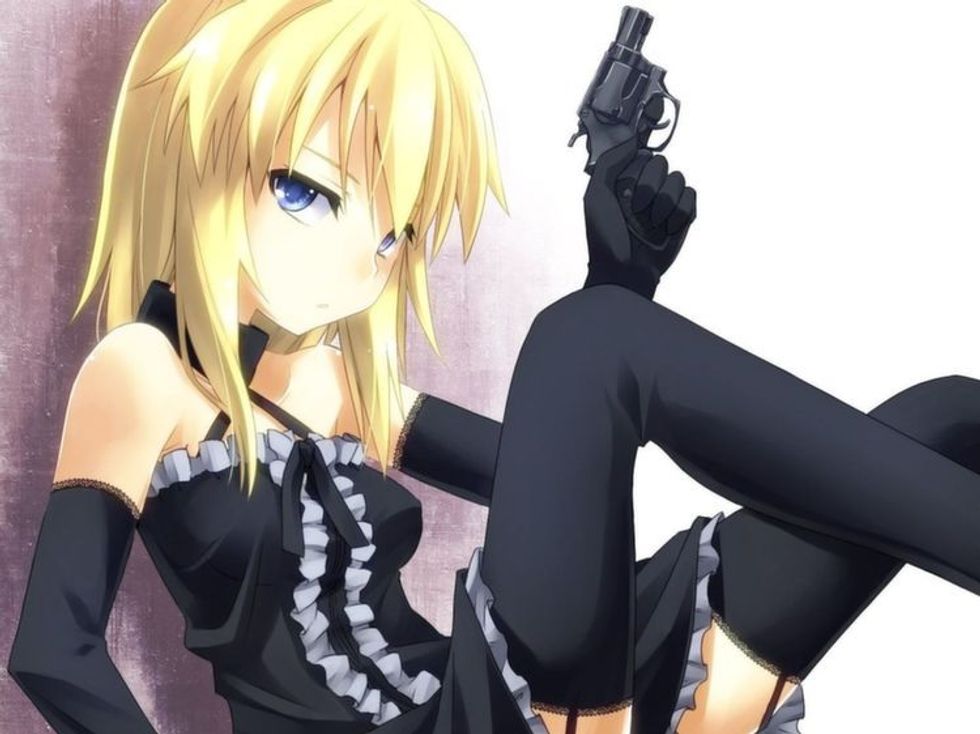 Also not allowed to ask where she concealed that.

A great week for freedom-loving gun humpers in Missouri, where Republicans in the state legislature used a clever parliamentary maneuver to kill a Democratic filibuster, then voted overwhelmingly to override Gov. Jay Nixon's veto of a bill that loosens Missouri's already generous concealed-carry law. Now Missourians will no longer need a permit to carry a concealed weapon, hurrah! Also, the bill enacts a "stand your ground" provision that lets you shoot anyone who scares you enough, and reduces the penalty for carrying a firearm into a building where guns aren't allowed from a felony to a misdemeanor. Still sounds pretty tyrannical, since there's any penalty at all, not to mention some buildings where guns might be prohibited.

Under the oppressive, tyranny-filled old version of the law, Missouri had a "must issue" concealed carry permitting process: Applicants had to complete a gun safety class, pass a criminal background check, and not have been declared mentally incompetent within the last five years. The new law gets rid of those oppressive regulations, for freedom!

Gov. Nixon had vetoed the bill because he is a big pussy who hates America, and also

because he said it would allow “individuals to legally carry a concealed firearm even though they have been or would be denied a permit because their background check revealed criminal offenses or caused the sheriff to believe they posed a danger.”

Joining Nixon in opposing the bill were groups representing law enforcement officers around the state, such as the Missouri Police Chiefs Association, along with the state’s four Catholic bishops.

Cops and bishops: the usual enemies of freedom. How were Missourians supposed to fight off a tyrannical government if they could be kept from having a concealed weapon simply by being a criminal, or not knowing how to use their weapon?

The newly enacted law will also allow an expansion of the "castle doctrine," so invited guests in a home would be allowed to use deadly force on intruders. This only makes sense, because why should homeowners bear the sole burden of gunning down a teenager slipping back into her house at 1 AM after sneaking out to see her boyfriend?

Supporters of unlicensed concealed carry insist it will make everyone safer, because more people will be able to defend themselves against bad guys. This would appear to contradict a study of Missouri gun laws which assessed the impact of a previous law deregulating gun ownership:

Gun-control advocates point to a study of Missouri gun laws by Daniel Webster, the director of the Johns Hopkins Center for Gun Policy and Research.

In 2007, Missouri lawmakers repealed a requirement that any purchaser of a handgun, whether from a licensed or unlicensed dealer, obtain a permit from the local sheriff. Webster’s study concluded that change contributed to an increase in the state’s murder and suicide rates.

Despite that evidence, Missouri legislators have continued to make guns more widely available, prohibiting municipal governments from restricting concealed carry and lowering the age required to carry a concealed weapon to 19.

In one beautiful quirk of the new law, weirdos who still want to get a permit for concealed carry will no longer have to renew their permits -- such permits as the state issues will now have no expiration date. Why even bother with a permit? Obviously, so you can travel with your lethal pal to one of the many states which now recognize other states' concealed carry permits as valid.

Sissies who worry that the new law will result in more shootings are advised to man up, ignore that study correlating wider availability with more homicides and suicides, and if they don't like it, go move to fucking CANADA, you goddamned socialist.

A separate bill changing Missouri's motto to "Load up on guns and bring your friends" will be introduced in the next legislative session.