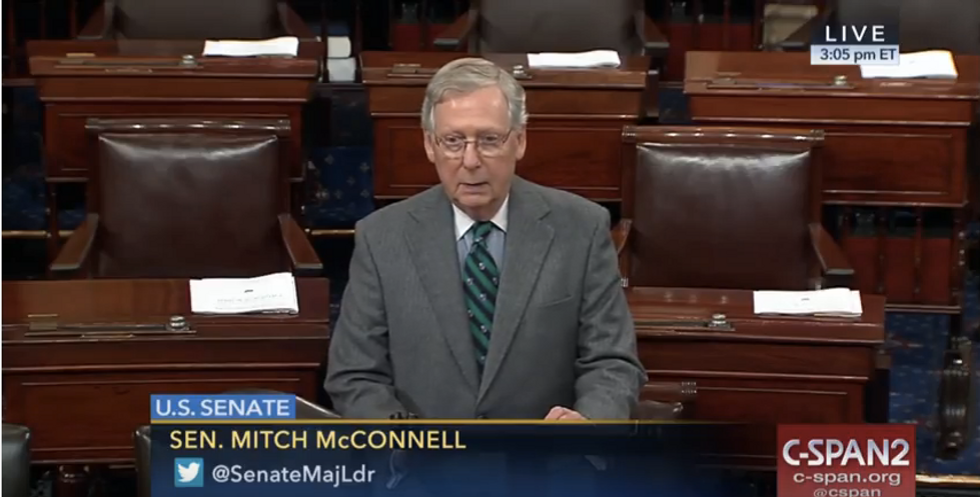 Over the last eight years, our country has experienced a legislative hissy-fit like no other. Government shutdowns, solemn vows to make sure President Obama can't get anything done, no matter what it is, refusals to give hearings to Supreme Court nominees hearings, etc. etc.

But Mitch McConnell is ready for us to put all of that behind us! Because he is a very, very gracious man. He is ready for Democrats to not do any of the things that Mitch McConnell did over the last eight years, and for them to treat Donald Trump with the respect that the GOP refused to give to President Obama. To just like, let him do whatever.

“But we can move forward — if we work together. The first thing we have to do is move beyond this us-and-them mentality that has so characterized the last eight years. Our goal should be to give confidence to everyone. Regardless of race, religion, or income. Regardless of where someone lives or who they voted for. We’re all in this together. We rise or fall as one."

Oh really! Weird how it was never time to do that over the last eight years! And magically, now, when you control Congress and the White House, you are ready for UNITY! How convenient!

“Obamacare offers a great example. Democrats came into office in 2009 with a promise to unify the country and big majorities that allowed them to ignore half of it. They made their choice with partisan, highly ideological laws like Obamacare that divided us further — and often made things worse."

Oh! You mean like you've got now? And what you intend to do now? Neat! Also, let's ignore the fact that insurance would be a lot cheaper for most people if Republican governors hadn't refused Medicaid expansions and a Republican Congress hadn't done that cute thing making the "risk corridors" "revenue neutral"! Because they were trying, on purpose, to make it more expensive so they would have the support to repeal it!

Just to note this again for those in the back -- Obamacare WAS the freaking compromise. We wanted single payer, we'd been fighting for single payer since the 1970s. Ted Kennedy pushed that, and Nixon pushed... wait for it -- a private health insurance company mandate. I voted for Clinton in the 2008 primary specifically because she was still pushing for single-payer and Obama was willing to compromise with a mandate.

Contrary to what McConnell is stating here, Obama -- quite frankly -- wasted those first two years trying to compromise and not step on Republican feet too often. He was way too nice, and could not figure out that they'd hate him no matter what he did, and that they were never going to give him any credit at all for trying to meet them in the middle.

Here's a good example! Back in 2011, Obama decided against making Elizabeth Warren the director of the Consumer Financial Protection Bureau -- which she proposed and created in the first place. Why? Because he thought it would offend the GOP. He then compromised by offering up Ohio State Treasurer Richard Cordray as director instead, but they refused to confirm him because they just wanted to make sure the CFPB failed.

He also nominated Merrick Garland, a centrist that Republicans had absolutely zero problem with beforehand, to the Supreme Court, and couldn't get a hearing. For, um, reasons!

He compromised on the fiscal cliff, so that only those who made $400,000 would lose some Bush era tax cuts (rather than $250,000) and John Boehner spat right in his face.

Oh! But what about stuff like the DREAM act? That was clearly a way to bust Republican balls and break their very hearts and shove immigrant children right down their throats!

EXCEPT FOR THE FACT THAT IT WAS INITIALLY PROPOSED IN 2001 BY ORRIN FUCKING HATCH. Who is, you may be aware, a Republican.

He compromised all over the place, and still the GOP acted as if he were an eeeEEEeeeevil soshalist out to destroy them all. Which was very awkward, by the way, for those of us who actually are socialists! In fact, on many issues, Obama was to the right of Nixon, and said so. Still not enough!

But Mitch McConnell, who in 2010 defended the GOP policy of absolute obstructionism by saying "the single most important thing we want to achieve is for President Obama to be a one-term president" is ready for us all to get along now! He is ready for Democrats to not do what the GOP did, and approve all of Donald Trump's cabinet members without pulling a "Mitch McConnell" and demanding they all meet the standards he required of Obama's cabinet nominees.

He wants us all to get along now! And we can do that, just so long as the GOP is allowed to do whatever they want with no objection from anyone whatsoever! Isn't that a nice and fair solution that everyone can get behind? Sure it is!

Except the thing is -- Republicans did themselves a disservice by trying to paint Obama -- who for all intents and purposes governed as a center-right president and was willing to compromise with them on pretty much everything -- as some kind of crazy socialist liberal. Because a lot of the Democrats in DC are starting to get a backbone, and are finally realizing that if they're going to be painted as such no matter how delicately they treat Republicans and how they compromise, they might as well stop bothering. I sincerely hope they do go full Mitch McConnell on Mitch McConnell, and Trump. Given what the GOP is already pushing through -- pulling out of the U.N., reinstating the gag rule on abortion services, repealing Obamacare and leaving millions without insurance -- we're gonna need them to.