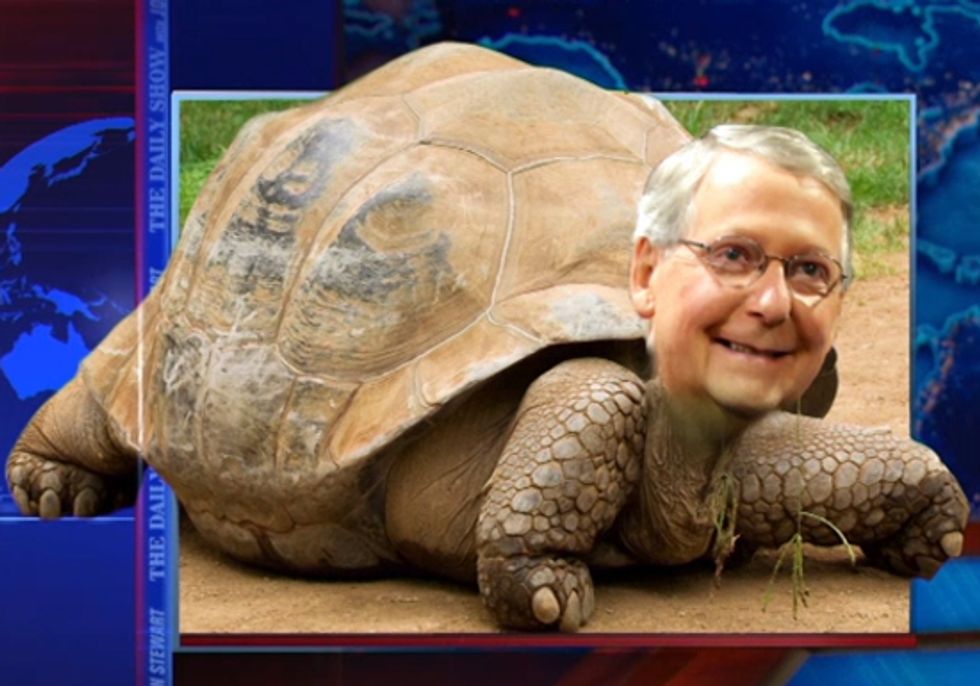 He is an actual, biological tortoise. And NRA stooge.

In a masterful deployment of Senate Rules jiggery-pokery, Majority Leader Mitch McConnell has managed to both fulfill a "promise" to allow a vote on a bipartisan compromise bill that would have restricted gun sales to those on terror watch lists, AND keep the NRA happy by making sure the bill would die a quiet death. While he was at it, he even provided political cover for Republicans in close Senate races this year. It was a truly impressive maneuver with something for everyone, except for people who wanted even the tiniest step taken against gun violence.

McConnell's move comes after the Senate rejected four gun bills Monday and House Democrats held an unprecedented sit-in that also resulted in no legislation coming to the floor (they'll try again after the Independence Day break). We can now move toward the two-week anniversary of the Orlando massacre secure in the knowledge that Congress is completely paralyzed by the NRA and unable to take even the smallest steps to prevent the unlimited spread of firearms. Don't feel any safer? Buy another gun!

After Monday's failed votes, Sen. Susan Collins (R-Maine) put together a variation on the "no fly/no buy" bill that would have prevented gun sales to anyone on two terror watch lists. The bill was cosponsored by Republicans Jeff Flake of Arizona and Kelly Ayotte of New Hampshire, and Democrat Heidi Heitkamp of North Dakota. To address concerns about Takin' Innocent Americans' Rights Away, it included an option for those denied a chance to buy a gun to appeal within 14 days, even offering reimbursement of attorney fees if the appeal were successful. So look, Ma, due process!

The Hill outlines McConnell's procedural shenanigans for us.

Instead of setting up a vote to add the Collins legislation to the pending appropriations bill on the Senate floor, McConnell scheduled a vote to discard it.

The Collins bill survived that test in a 46-52 vote, but it fell far short of winning 60 votes, the threshold necessary to overcome procedural hurdles.

The result allows Republicans to argue that no other action is necessary.

“It didn’t have sixty votes. That’s what a motion to table does. It demonstrates where the votes are,” said Don Stewart, McConnell’s spokesman.

The people of Kentucky should be glad this man is not selling used cars.

To further weaken Collins's bill, McConnell also scheduled a vote on another measure, sponsored by Wisconsin's Ron Johnson, that the NRA was fine with. It had no chance of passing, but gave political cover to several Republicans who, like Johnson, are in tight races this fall. This way they can say they voted for a bill to deny guns to terrorists -- just one that had such a high burden of proof that it wouldn't have really prevented any gun sales. The chickens who voted against the Collins bill and for Johnson's weaksauce "alternative" included John McCain (R-Ariz.), Rob Portman (R-Ohio), Richard Burr (R-N.C.), Roy Blunt (R-Mo.) and Marco Rubio (R-Fla.). Anyone who hears them saying in a campaign ad that they voted to keep guns out of the hands of terrorists should moon them.

The Johnson amendment worked brilliantly to draw votes away from the Collins measure; a number of senators said Collins's plan could have gotten 60 votes if it had been offered as a clean amendment to the appropriations bill, instead of as a vote to table it:

“If you put this one up for cloture now, it’s got a good shot,” said Sen. Jeff Flake (R-Ariz.), who backed the Collins measure.

He said the Johnson alternative gave his colleagues a reason to vote against his bill.

“There was a competing one,” he added. “There were two competing amendments. If there’s only ours left, then I suspect a number of those who voted for the other one will come over.”

Collins also said she was disappointed her bill never got a straight vote, so she'll never know if it could have gotten enough support to pass.

When asked if she wanted to have another vote on the proposal, Collins said, “Of course,” just before taking an elevator down to the Capitol basement.

The Hill didn't say whether Collins shouted any obscene imprecations against McConnell as the doors closed. We'd like to think she did.

McConnell's slick move did at least get some appreciation for its subtle thuggishness:

McConnell, a master of the Senate’s arcane rules, provided cover for vulnerable Republicans who wanted to be seen as supporting the effort, but did not want to cross the National Rifle Association.

That's some catch. It's the best there is.