Mitch McConnell Not A Scientist, Not Much Of A Senator Either 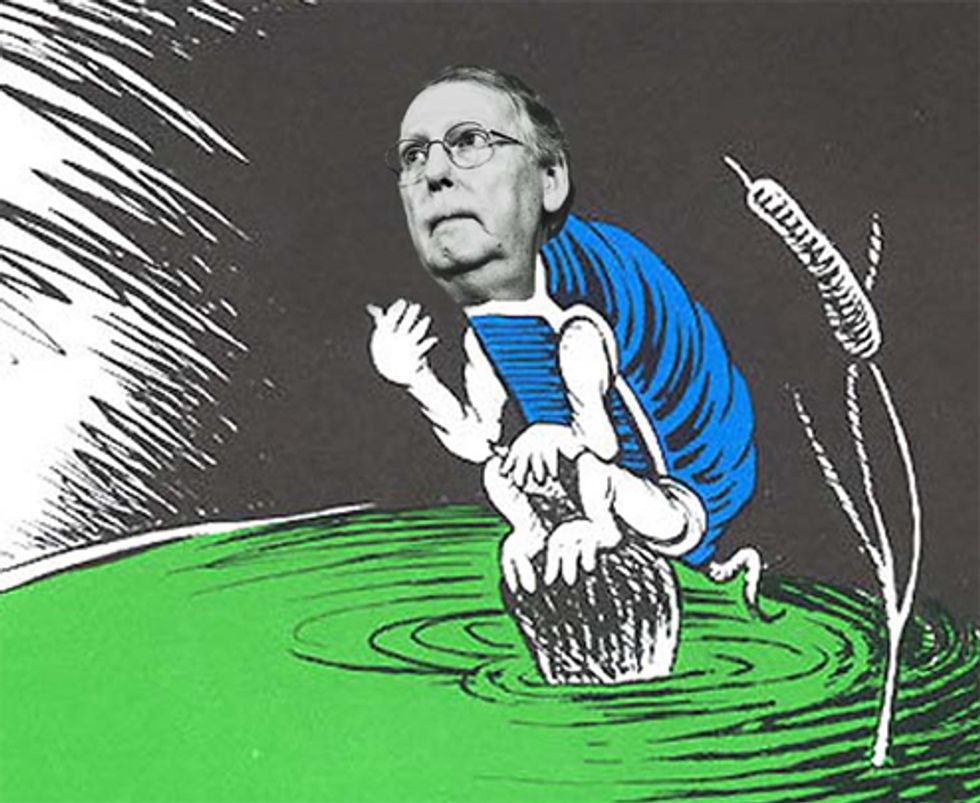 You can now add Sen. Mitch McConnell's name to the growing list of Republicans who believe saying "I'm not a scientist" is the perfect way to avoid answering whether they understand that climate change is real.

When asked what it would take to convince him that climate change is a problem, he demurred and said, "I'm not a scientist, I am interested in protecting Kentucky's economy, I'm interested in having low cost electricity."

In case you were wondering, no, McConnell did not admit that he's also not an economist, nor an energy expert, but that doesn't mean he can't opine on those topics.

"The Indians and Chinese are building coal plants, the Europeans having started off in this direction, are now importing coal, and the Australians, just a couple months ago, repealed their carbon tax, which is their version of what the EPA regulations are doing in this country," he said. [...]

The "I'm not a scientist" excuse is a strange new evolution (ha, like that's even a thing) from the anti-science crowd that has historically responded with "nuh uh" to science-y things like whether gravity is real or whether climate change is actually a bad thing. In 2012, Marco Rubio admitted that he also is not a scientist, in response to the question, "How old do you think the Earth is?" It's not like he can really be held responsible for his ignorance; this was before Neil deGrasse Tyson rebooted Carl Sagan's TV series Cosmos: A Spacetime Odyssey to answer all those questions. Not being a scientist, Rubio could not answer that question, and yet managed to give one hell of an answer anyway.

I’m not a scientist, man. I can tell you what recorded history says, I can tell you what the Bible says, but I think that’s a dispute amongst theologians and I think it has nothing to do with the gross domestic product or economic growth of the United States. I think the age of the universe has zero to do with how our economy is going to grow. I’m not a scientist. I don’t think I’m qualified to answer a question like that. At the end of the day, I think there are multiple theories out there on how the universe was created and I think this is a country where people should have the opportunity to teach them all. I think parents should be able to teach their kids what their faith says, what science says. Whether the Earth was created in 7 days, or 7 actual eras, I’m not sure we’ll ever be able to answer that. It’s one of the great mysteries.

Should we bother pointing out that Rubio is also not an economist, but that didn't stop him from explaining how the economy has nothing to do with the great mystery of whether God created the Earth in seven days? Nahhhh.

Creationist Gov. Bobby Jindal recently condemned President Obama's administration for being anti-science -- yes, really -- even though when asked whether he believes in evolution, he responded, "The reality is I'm not an evolutionary biologist."

Not that you need to be an evolutionary biologist to accept evolution as good science. You could just be a regular American who completed junior high. But Jindal's answer sounds more better and more smarter than, "No, I do not believe in science because Bible stuff." Or so he thinks.

It's not just Republicans who are all of a sudden confessing that they are not scientists. Even President Obama is not a scientist. However, he has a slightly different take on that whole having an opinion thing:

But seriously, how dumb is it that Obama, who is not a scientist, would waste time consulting actual scientists to learn science things? As Mitch McConnell explained, he's got more important things to worry about, like how Obama sucks so hard. You don't have to be a scientist to know that

Given McConnell's admission that he cannot be bothered to think about climate change because he is not a scientist, we assume this means there are a number of other issues about which McConnell has no opinion. Obviously, he will not be opining on abortion, because he is not a woman. Or a doctor. Or a fetus.

Nor will he be criticizing Obama for pulling out of Iraq and warning that terrorism is "the biggest challenge of the 21st century, in terms of danger, physical danger to Americans," because he is not a military strategist.

He certainly won't be declaring Obamacare a "disaster" because he is not a doctor.

In fact, now that we think about it, we're pretty sure the only thing McConnell will be discussing from now on is turtles. Because we know he is one of those. It says so on the internet.