Mitch McConnell Will Crush His Tea Party Enemies, Grind Their Bones Into Dust 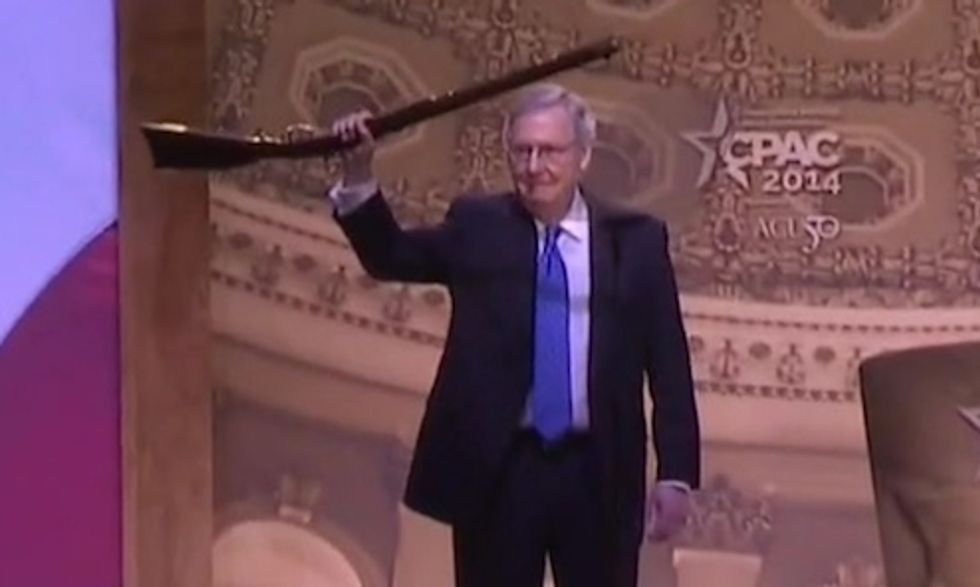 Once upon a time, Republicans looooooooved the Tea Party. No, it's true. The Tea Party was this great "independent" uprising of really Republican Republicans who were SO mad that they'd been Taxed Enough Already (translation: super pissed there was a black guy squatting in the White House), and Republicans would ride the wave of tinfoil-hatted fury all the way to their "permanent Republican majority." (Spoiler: That didn't happen.)

But then Republicans discovered what the rest of us already knew: Those guys are fucking crazy! And not just because of their silly costumes and their incoherent misspelled signs and the founder of the House's Tea Party Caucus, Michele Bachmann (R-Batshittesylvania), demanding that real Mericans "make a covenant, to slit our wrists, be blood brothers" to stop Obamamcare. (Spoiler: That didn't happen either.) The teabaggers who were elected basically took the House hostage, demanding that Speaker John Boehner crash the economy and blow up the gobmint to, um, make a principled point about, um, things. (Spoiler: That didn't ... oh well, you get the idea.)

So now establishment Republicans have to fight to take their party back from the party fighting to take their country back, and it is all kinds of messy. And also hilarious! Seriously, we are running out of popcorn watching this intraparty epic battle over just what kind of crazy is and is not acceptable according to the party of Ronald Jesus Lincoln.

But Sen. Mitch McConnell -- who is currently in the midst of a cagematch-to-the-death primary battle against LinkedIn liar Matt Bevin, who believes opposing domestic violence is unconstitutional -- has a plan. He will KILL THEM ALL.

“I think we are going to crush them everywhere,” Mr. McConnell, the Senate Republican leader, said in an interview, referring to the network of activist organizations working against him and two Republican incumbents in Kansas and Mississippi while engaging in a handful of other contests. “I don’t think they are going to have a single nominee anywhere in the country.”

See, Mitch has no time for the wingnuttiest wingnuts in the party of wingnuts. He is Sensible. And Reasonable. And that is why he definitely did not attend this year's CPAC, the annual conference of conservatives just being conservative (and maybe scoring some secret M4M sex) as their cheer each other on for hating The Gays, The Women, The Non-Whites, all while fucking the corpse of Reagan for three days straight. You wouldn't catch McConnell trying to court the crazy vote. Of course not! He is going to crush the crazy to save his Senate seat.

Wait, this just in. Never mind:

The Senate’s top Republican — under the gun in his bid for a sixth term — brandished some cold steel of his own Thursday at a top conservative conference.

Mitch McConnell of Kentucky surprised the thousands gathered for the year’s Conservative Political Action Conference when he took the stage brandishing an antique-style muzzle-loading rifle and hoisted it above his head.

It is a hard time to be Mitch McConnell. On the one hand, he is trying to remind conservatives that he is too a conservative. But on the other hand, should he survive his primary, he must also remind the people of Kentucky, who do not care for him one tiny bit, that he is not crazy. In fact, like his Democratic challenger Alison Lundergan Grimes, he hearts the ladies, even though he opposed the Violence Against Women Act (but pretended he did not oppose it, so he should get half credit, right?), and also he hates reproductive rights and also equal pay. But other than that, Mrs. Lincoln ...

Well, Mitch, for what it's worth, we wish you luck in your search and destroy mission. We too are sick of the teabaggers teabagging America for racism. So go get 'em, boy. We will keep the popcorn handy.