Mitt Romney: If We Can't Win Latinos, How Did We Win Puerto Rico, HENGHHH? 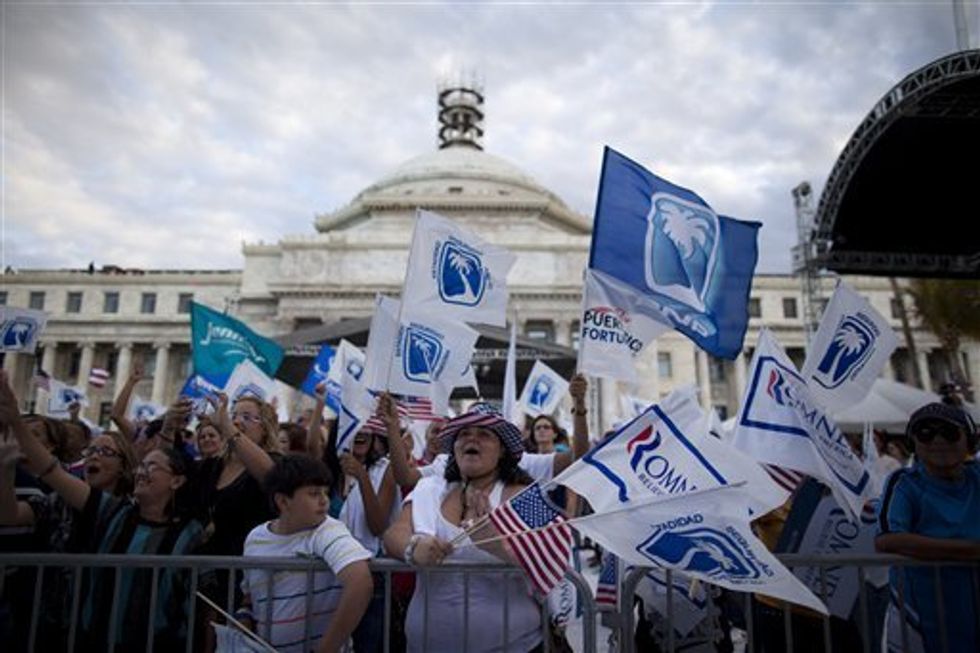 Mitt Romney, bless his heart, has reached the"delusion" portion of the campaign trail.

“Those people who don’t think that Latinos will vote for Republicans need to take a look at Puerto Rico and see there that conservative principles and Latino voters go together,” he said, listing interests Latinos shared with other voters, like jobs. “I intend to become our nominee, and I intend to get Latino voters to vote for a Republican and take back the White House.”

Pssst. Romney! Hey, Romney! You won most of Puerto Rico's 100 thousand GOP primary votes (in a place with a population of four million) because Rick Santorum insulted them to their faces. But that's cool, dude. You just keep on keepin' on, with your common-man relatability and your boss-man face and your membership in the Republican Party. Latinos love those things about you, but don't rest on your laurels! Maybe a little love poem to churros being just the right fried?

Romney then unleashed his famous sense of humor.

One questioner, assuming Romney would win the nomination, encouraged him not to write off Illinois in the fall, suggesting he could win it.

A 50-state strategy! You can DO IT! You should probably spend a lot of your time and resources in Los Angeles, San Francisco, New York, Chicago, and Boston. And definitely work it for the Latino vote -- and why not African-Americans, while we're at it? They are not slaves! Barack Obama does not own them! And women! Well, actually, sorry about the women. Probably not even Ann is going to vote for you, lo siento. [Los Angeles Times]