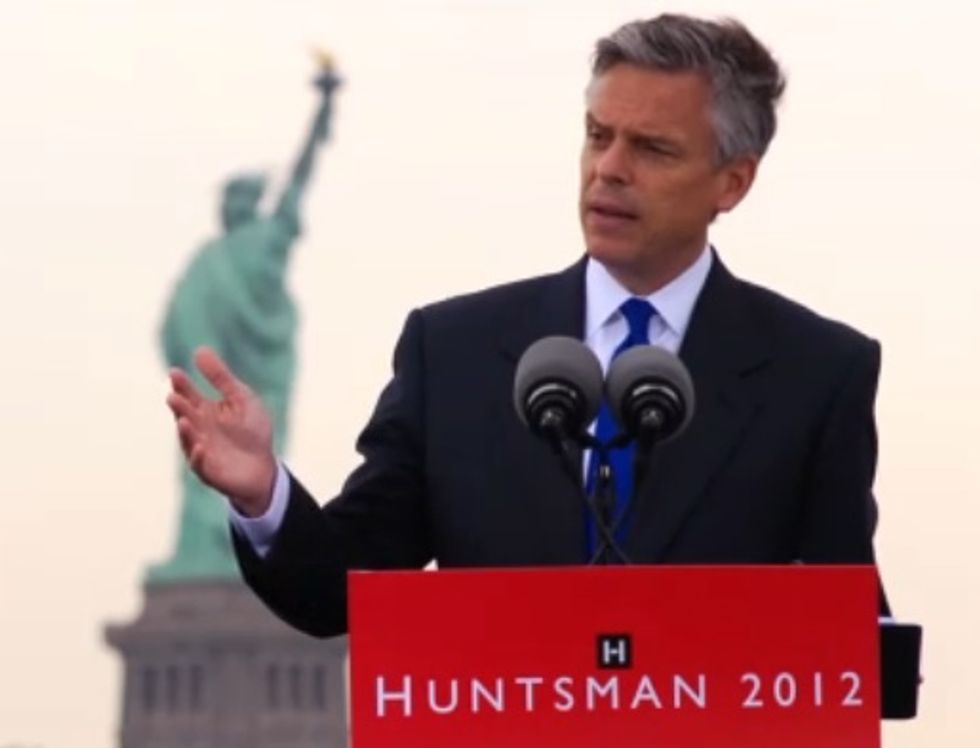 Jon Huntsmanis in! For what? Who is he? Is he Tim Pawlenty 2.0 campaign reboot? No, he is the Chinese guy running for president. He's not Chinese? He is Mormon. So he is Mitt Romney the Sequel? Huntsman formally declared his candidacy today in the liberal Mecca of New York City, because the socialist French statue is there, which makes a good GOP campaign announcement backdrop. Huntsman is Obama's former ambassador to China, a job reference he may want to leave off his resume when he hands it to the Republican voters. "Chinese ambassador" sounds an awful lot like "Kenyan Muslim" if you have no idea where China or Kenya are on a map, which is a lot of Americans.

Huntsman also doesn't seem to understand entirely what this whole "campaign" thing is about yet. He said nothing mean or blatantly false about Obama, which is the only policy platform the GOP candidates are currently allowed.

Huntsman said he respects Obama but added that he and the president have "a difference of opinion on how to help the country we both love."

Yes, "gentle swipes" are what presidential campaign politics are all about. That may be how China does government criticism, but you are in America now, Jon. His website, "Jon2012.com," still has nothing on it besides a video replay of his campaign announcement and a sign-up form.

This is his brilliant campaign logo:

"H" is the best campaign slogan Jon Huntsman can afford, along with a skinny white font from the package of fonts that automatically come with Microsoft Word 2007. He is running for president of hipsters. Or Hilton hotels? Heroin? We do not know. We like Mittens better for president of Haiti, anyway. [AP/ Jon2012.com]