Mitt Romney Thinks Mitt Romney Would Be Easily Defeated In 2016, Will Grace Us With Run Anyway 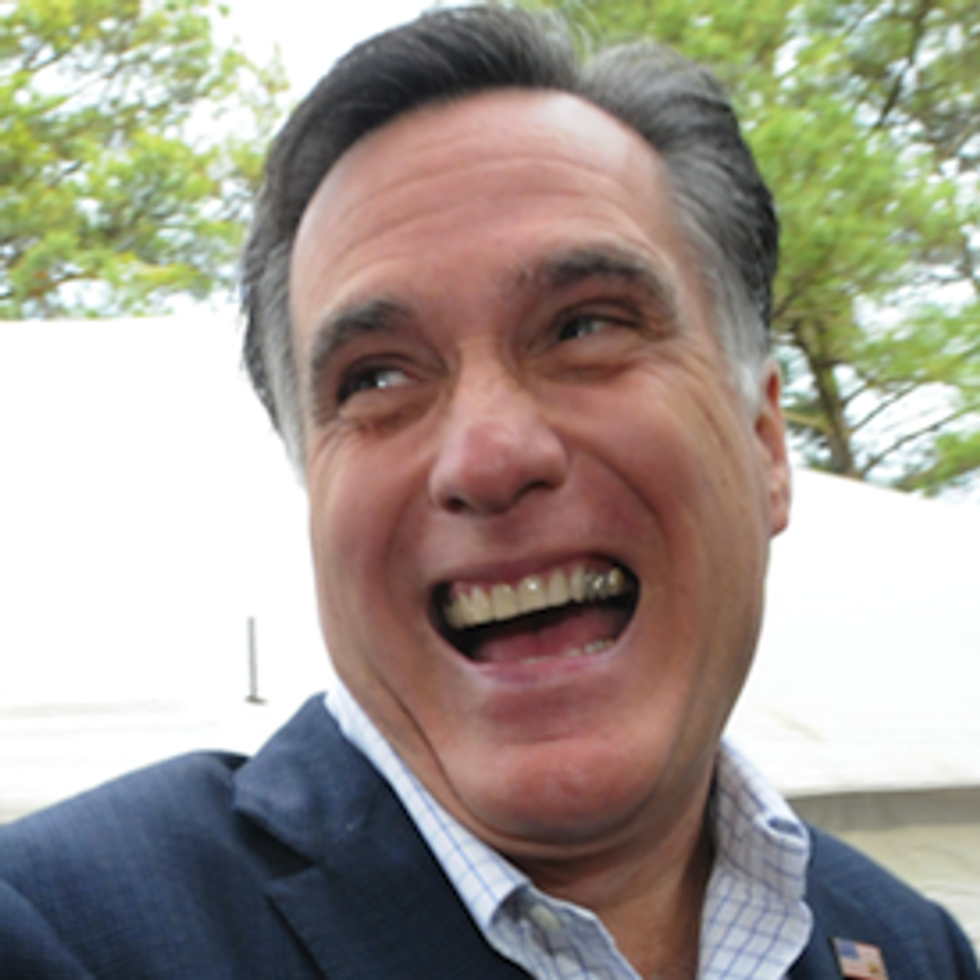 How excited are we, on a scale of 1-10, that Mitt Romney really and truly and honest-to-gosh is going to run for president again? Oh, let's say 47. We are excited to 47.

There's plenty of chatter on the interwebs and from Anonymous Sources In The Know that yup, he's rallying the troops so he can be once, twice, THREE TIMES a loser. There are all the hint hints, the wink winks, the secret meetings, the rumors, the "I won't say no for sure" interviews, the blatantly obvious and in-no-way-subtle-at-all campaign the Romney team has been running pretty much since he got his ass kicked the last time. [contextly_sidebar id="Tl2SRZlqP2FPfHeXsx4ngTuWEfkwP7tH"]

Apparently, Her Better-Than-You-People Majesty Ann wants it SO HARD too:

Mitt's useless sidekick from 2012, Rep. Paul Ryan -- the guy who was supposed to add some youthful conservative magic to the ticket and yet somehow did not, HUH -- recently announced he won't be running in 2016 after all:

"I have decided that I am not going to run for president in 2016," Ryan said in a phone interview, noting that he is "at peace" with the decision he made "weeks ago" to forgo a bid for the White House.

"It is amazing the amount of encouragement I have gotten from people - from friends and supporters - but I feel like I am in a position to make a big difference where I am and I want to do that," he said.

Ryan hasn't been able to accomplish anything whatsoever during his tenure as a congressman, unless you count trying to wage war on the poors and pissing off his own Catholic Church an accomplishment, which we don't and neither should he. And Ryan hasn't exactly hidden his desire to one day be at the top of the presidential ticket, like a real boy! So his non-success in Congress is not the real reason he's staying out of the 2016 race. It's because he promised that's what he'd do if Mitt wants to lose again:

"I wouldn't if he were. I would support Mitt. If he were to run, I would not," Ryan said Tuesday. "But I don't even know if I'm going to either myself. That's something I'm going to decide in 2015."

Always a bridesmaid, eh, Paul? Anyway, with that flaccid competition out of the way, Romney's team is already looking at some of the other future also-rans. Like, LOL, Jeb "The Smart One" Bush. But as former Wonkette great Jim Newell, who is still great, but in other parts of the interwebs, explains, Team Mittbot already has the perfect argument against that never-gonna-be-president too: Jeb's too much like Mitt, and therefore could not possibly win. Take it from Mitt, he's A Expert!

Some of the major concerns for Jeb Bush’s primary and general election viability will look familiar: they’re a lot like Mitt Romney’s. He’s either held or holds certain heterodox positions that won’t go over well with the conservative base as he tries to win the party nomination.

And that's not just Jim Newell's Smart Take; that's what Romney's own people are saying. They know from experience that the Republican base doesn't care for someone who isn't completely 100 percent certifiable, and gosh, the Democrats sure beat him up pretty good, so the same thing would happen to Jeb, which is why Mitt is a better choice than Jeb. Yes, really!

They’re saying “Jeb Bush may be too much like Mitt Romney to win a general election” as a rationale for why Mitt Romney himself should run.

We couldn't care less what pitch Team Mitt is making to the party's billionaire king-makers. So long as we get to spend another cycle laughing at Mitt and Ann and the car elevators and the classy horses and suckers who still think Mitt totally could have won if it weren't for those meddling unskewed voters, we'll take it. And laugh all the way to the Hillary Clinton inauguration.