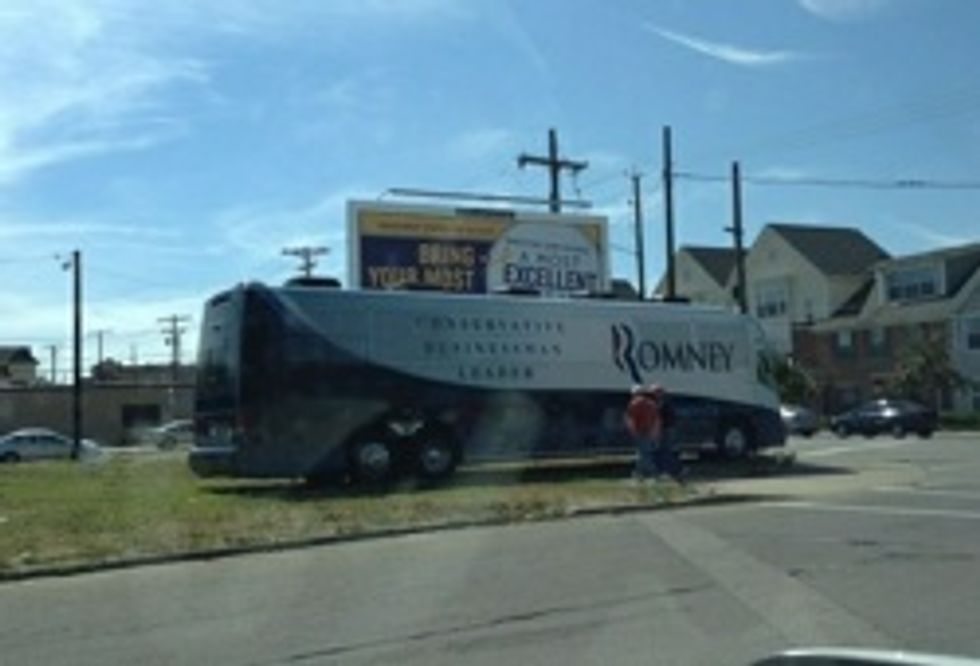 Well howdy doo, no one told us the first Lincoln-Douglas debate of the season was going to be today: "Republican nominee Mitt Romney's guerrilla tactics continued Thursday, as the campaign bus circled the venue where President Barack Obama will be speaking this afternoon... the bus honked its horn dozens of times, before circling around to do it again."Well. This is a new thing. Sure, the McCain campaign would do this from time to time '08. But it wasn't a planned campaign tactic, just the inevitable result of a staffer leaving car keys next to the Ambien bottles in McCain's hotel room.

This is fine, though. Let's have more of this. Hell, make it the entire campaign from now on, just an escalating series of juvenile pranks. The Romney bus comes to honk and drive in circles at an Obama event, then Obama sneaks up on Romney for a kidney punch, Romney slips down the White House chimney to collect Obama's scalp, Michelle Obama takes a shit in Tagg Romney's driveway, Ann Romney steals the nuke codes and sets off 100 nukes, Joe Biden digs up George Romney's body and puts his hand up to the corpse's balls like he's fondling them and Instagrams five different version of the pic, Mitt Romney kidnaps Sasha and Malia and doesn't return them, Obama puts Romney's hand in hot water while he's sleeping and Mitt Romney wets the bed and finally concedes defeat.

Or spend give more months spewing feel-good talking points about nothing and repeat them every day and wonder why know one shows up to vote. That's a more traditional campaign model