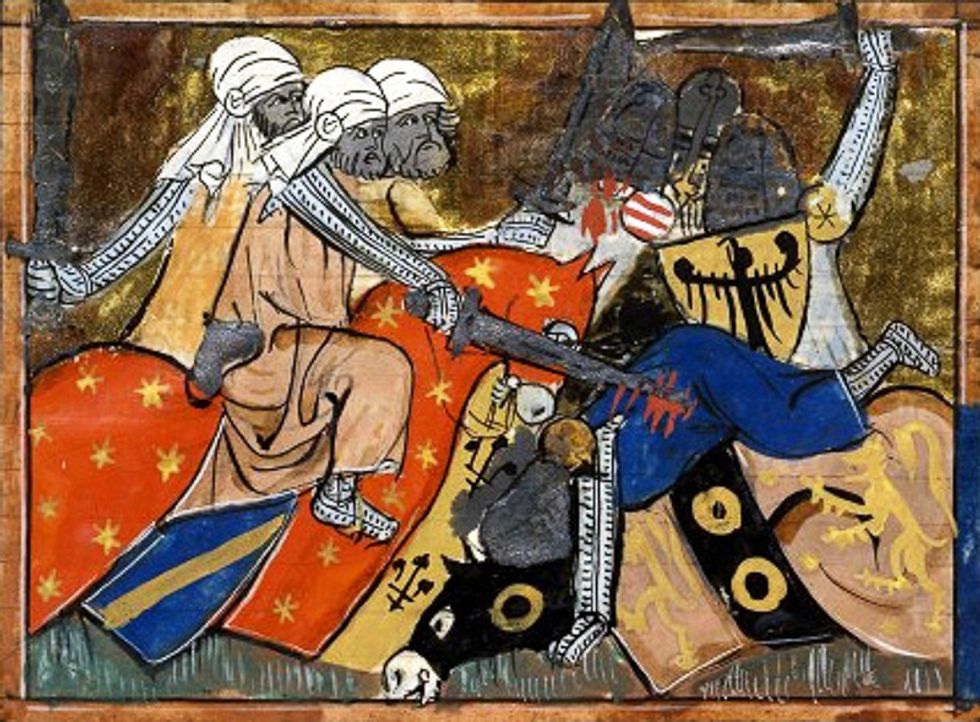 We have to say, we never saw this one coming. In the race to see who could come up with the most insane, unconstitutional proposal in reaction to the Paris massacre, our money was on the obvious favorites, Ben Carson and Donald Trump. And while they both made predictably stupid comments, we never would have expected the worst idea of all would spring from the "moderate" mind of Ohio Gov. John Kasich.

Here's how John Kasich, as president, will defeat ISIS: He's going to focus foreign policy on promoting "Judeo-Christian values" and create a brand new agency that will be a bit like the Voice of America, only instead of beaming American jazz beyond the Iron Curtain, it'll be responsible for Judeo-Christianizing the rest of the world, especially in the lands currently controlled by the Mahommedans. Then once we've brought Judeo-Christianity to the heathens, they'll see that there's no way like the American Way.

Maybe Kasich got tired of being called "the reasonable one" and decided that if Crazy Talk is what's selling this year, he may as well go all in.

In a speech at the National Press Club Tuesday, Kasich explained the centerpiece of his evangelical foreign policy:

“U.S. Public Diplomacy and International Broadcasting have lost their focus on the case for Western values and ideals and effectively countering opponents' propaganda and disinformation. I will consolidate them into a new agency that has a clear mandate to promote the core Judaeo-Christian Western [sic] values that we and our friends and allies share,” Mr. Kasich said. He said those are human rights, democracy, freedom of speech, freedom of religion, and freedom of association.

“In this vacuum of values, is it any wonder that we see bright, educated young people abandoning the West for the meaning they think they see in the extremists’ cause?” he said.

As a concrete demonstration of his commitment to the values of Jesus, who said that we must love our neighbors and used the parable of the Good Samaritan as an example of how love and mercy transcend tribe, Kasich called on President Obama to immediately stop resettling Syrian refugees in the United States, explaining his stance in a charming story starring one of his teenage daughters:

"One of my daughters last night said, 'Why are you not going to let these people come in? What’s that about, Daddy?'" Mr. Kasich said. He said he told her, 'Reesey, we understand these people are in trouble, but think about, Reesey, us putting somebody on our street, in our town, or in our country, who mean us harm. We can’t do that, can we Reese?' 'I understand now Daddy why you said what you said,'" he related.

But she talks like she's six, at least in her dad's stories.

In an interview with NBC News, Kasich explained his vision for an explicit embrace of a Judeo-Christian -- or as he kept saying, a "Jewish and Christian" -- foreign policy, and the as-yet unnamed agency. ("Ministry of Truth" has a nice ring to it, we think.)