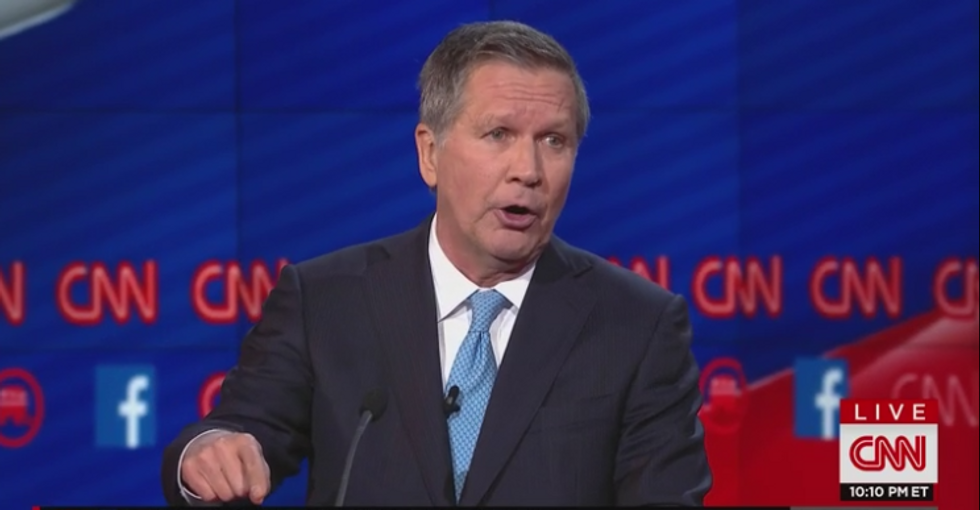 Can't we be grown-ups about this?

After his astonishing unexpected upset of an 11-point landslide victory in Ohio Tuesday night, Ohio Gov. John Kasich is convinced he is this close to stealing the Republican nomination away from actual first-place front-running perpetual winner candidate Donald Trump. Just one tiny obstacle to overcome: those pesky Trump voters.

[contextly_sidebar id="Wyql9kxluXzszOOK9eMq1i3FnHgXgHht"]See, it all works out perfectly if the party establishment decides, at the  "open convention," that the candidate in last place should get the nomination. But Trump has now hypothetically suggested, by rather explicitly encouraging, his supporters should go OG Tea Party unless Trump "automatically" gets the nomination. And that sort of Trumptarian call for violence -- which we know is actually being carried out by paid professional Democrats, with the Hillary Alinsky Clinton Soros Machine footing the bill -- has no place in Moderate John Kasich's Moderate Plan To Overthrow The Will Of The Republican Voters, Moderately.

Perhaps Kasich thinks pissing on Republican heads and calling it rain is the true mark of civilized leadership. That's sort of his schtick: using his inside, grown-up voice to lull you into a hypnotic trance of boredom where you start to think he's the one reasonable guy in the whole gang of crazy.

But please stick these here toothpicks in your eyes, or whatever it is you need to do to stay woke, because Kasich is, like every other Republican who has fancied himself (or herself, don't forget Carly!) the next president, a rightwing extremist son of a zipless fuck ASSMONKEY. Like Trump, he opposes Muslim savages, Syrian refugees, homosextarian marriage, and ladies being the boss of their own hoo-has. (He has a real hard chubby for denying healthcare, or even information about healthcare, to women, especially rape victims.)

Still, it just won't do to have Republican voters get all irate and punchy and bang-bang-shooty (because all Republicans are armed at all times, of course, to stop the bad guys with guns, and also government tyranny 'n' shit). Kasich and his special brokered-convention team of advisers would prefer to successfully orchestrate a coup without anyone objecting that the voters' last choice was selected by the very establishment Trump's neo-Nazis and KKK wizards and regular dimwitted dumbass supporters are so as mad as hell about.

Wouldn't it be so much better for everyone if Republicans simply and calmly agreed that Kasich is the better, if not more popular, choice for the party? Perhaps they could imagine they are all women in Kasich's Ohio, and they needn't worry their pretty little heads about what they want. Just trust that Kasich and his fellow GOP rulers know what's best for them, and everything will be fine.