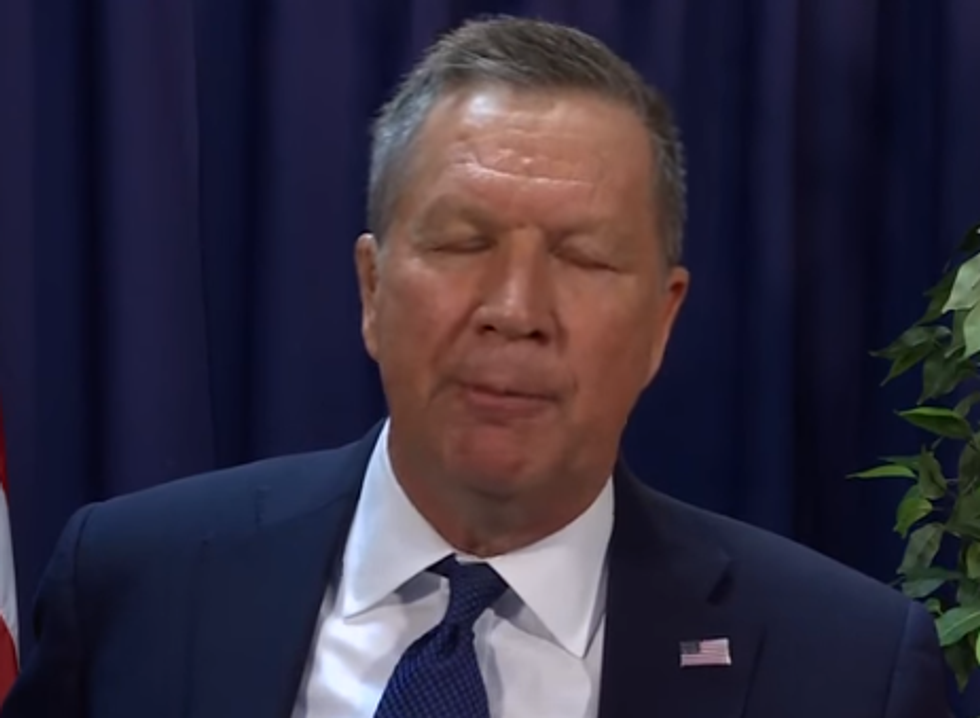 Hug him. Somebody, please hug him.

Why can't we all just get along? That is what John Kasich needs to know right now. Because he sees his Republican governor pals signing these insaneanti-LGBT laws, and he knows there wouldn't even be a problem if the big gay lions would lay down with those sweet fundamentalist Christian lambs and agree that hugs are better than religious freedom laws. He explained it on "Face The Nation":

JOHN DICKERSON: Let me ask you a question about something that your colleague, a governor in North Carolina, did. He signed a law in North Carolina that banned anti-discrimination protections based on sexual orientation. It also mandated that transgender people use public bathrooms based on the sex indicated on their birth certificates. Would you have signed that law?

KASICH: Probably not. I mean, look, we are not having this issue in our state about this whole religious liberty.

butt-medicine"></a>[/wonkbar]Know who ELSE said they're not "having this issue" in their state? NO, NOT HITLER, it was South Carolina Gov. Nikki Haley! Of course, whiny conservative Christians are pretty sure they're being holocausted in EVERY STATE IN THE UNIVERSE.

I believe that religious institutions ought to be protected and be able to be in a position of where they can – they can, you know, live out their – their deeply held religious purposes. But when you get beyond that ... it can become a contentious issue. [...] So everybody needs to take a deep breath, respect one another, and the minute we start trying to write laws things become more polarized, they become more complicated, obviously, I don’t want to force people to violate their deeply held religious convictions but we’d have to see what that’s all about. I wouldn’t have signed that law. [...]

Can’t we figure out just how to get along a little bit better and respect one another? [...] Everybody, chill out, get over it if you have a disagreement with somebody.

[wonkbar]<a href="http://wonkette.com/599290/moderate-john-kasich-calls-for-kinder-gentler-gay-bashing"></a>[/wonkbar]Oh, sweet naive John Kasich. If only everybody could have some common sense compassionate conservatism, nobody would ever fight. He's said things like this before, of course. He said at the GOP debate in March that it's probably not that big of a deal for wingnut Christians to make cupcakes for dirty homosexuals, but if the wingnuts really don't want to do it, those gays should be sweethearts and just find a different cupcake maker. By all means, don't sue the poor people for loving Jesus so much! That's just uncouth.

And hey, Kasich loves the gays! He went to a gay wedding one time!

But actually that is not how this works. On one side, you have extremely conservative religious people who actually believe that if they bake a cake for a gay wedding (or sign a marriage license), their wonderful, loving, omniscient Jesus will dropkick them into the fires of hell with a throaty guffaw. On the other side, you have LGBT people, who for some weird maniacal reason think they, as Americans, should be able to buy any cake they want, as our founding fathers intended. (Well, at least the founding fathers intended that for white people.)

So we are at an impasse, and we are very sorry to report that America will not be solving this problem by hugging it out, or getting all the gay-lovers and the gay-bashers to dive together into the world's biggest puppy pile, with John Kasich at the bottom. Nope. Nuh uh. Ew.