Mommy, Why Are Donald Trump And Fox News Fighting? 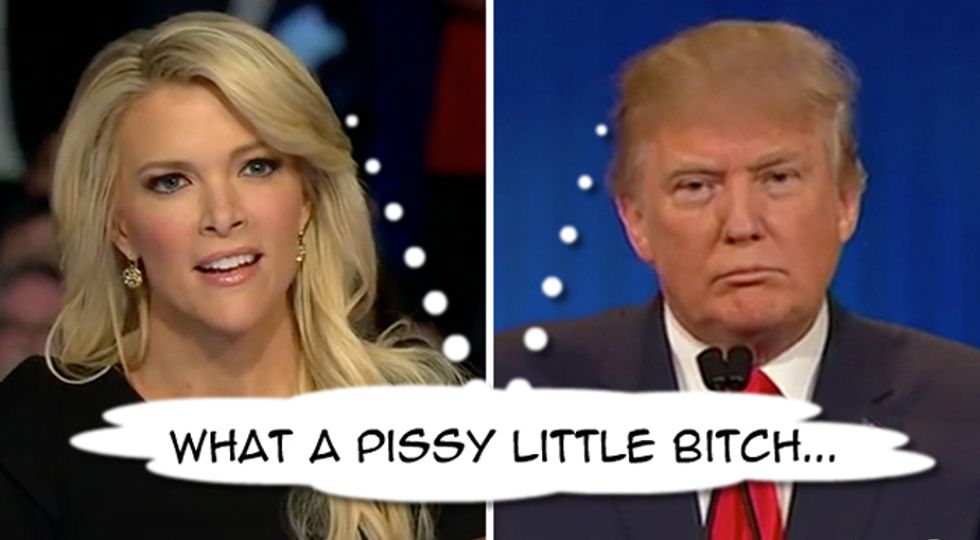 We could have made a similar picture with Bill O'Reilly's face, but ain't nobody wanna see that.

Because they're egotistical assholes, dear, and they are both just THE WORST. Need we say more? Fine, we will say more. So Fox News canceled a Trump interview with Bill O'Reilly, due in part to the fact that Trump decided to go off on O'Reilly on the Twitter machine Monday night, like so:

Then, as Salon points out, Trump started retweeting his turd-throwing followers, saying all manner of meannesses about Fox News, Megyn Kelly (oh yes, her again!), and also O'Reilly:

Remember, Megyn Kelly is YOOOOOGELY persona non grata -- for any Trump supporters reading this, that's foreign talk that means "poopyhead" -- in Trumpland, due to how she did unfair gotcha journalism to Trump during the first presidential debate. Worse than that, she bled out of her whatevers and they had to have the venue professionally cleaned. Anyway, and as you probably already know, there were SO MANY MORE TWEETS than what we just posted for you. There always are.

This, of course, has come after TWO kiss and make up sessions with Fox News, due to how the two entities feed off each other like two ticks 69ing on a dog's belly.

At first it didn't seem like O'Reilly was all that bothered by Trump's drunk-tweeting or whatever it is:

“He wants people to like him. When people criticize him, he takes it personally,” O’Reilly said. “You know, this machine, the tweeting thing, that’s like the worst thing you can give Donald Trump is this tweeting thing,” he added laughing. “I just think this is an extension of his reality show ‘The Apprentice,” …this is just theater right now. He gets a lot of attention from the theater.”
O’Reilly admitted that he and Trump attended Yankees and Knicks game together in the past while promoting his new book, “Killing Reagan,” on ABC’s “Jimmy Kimmel Live,” before suggesting that Trump’s resonance with voters was rooted in disaffection with President Obama’s handling of the economy.

“We need to get this country on track, and we need to start to develop this country in a way that puts its dominance back. That’s what Trump is pushing, and that’s why his message is resonating,” O’Reilly argued.

But then OH NO! The O'Reilly staff canceled Trump's appearance, probably because Trump kept the Twitter-banging up all throughout Tuesday, like the whiny-ass Twitter-banger he is, and that's when Donald Trump decided that, because he is obviously the originator of all things, it was his idea in the first place, because fuck Fox News is why:

Uh huh. Has Fox News replied to this? Fuck yes it has! Here, have an official statement:

At 11:45am today, we canceled Donald Trump's scheduled appearance on "The O’Reilly Factor" on Thursday, which resulted in Mr. Trump's subsequent tweet about his "boycott" of FOX News. The press predictably jumped to cover his tweet, creating yet another distraction from any real issues that Mr. Trump might be questioned about. When coverage doesn't go his way, he engages in personal attacks on our anchors and hosts, which has grown stale and tiresome. He doesn't seem to grasp that candidates telling journalists what to ask is not how the media works in this country.

And then Trump responded, because he always has to have the last word:

Mr. Trump stands by his statement made earlier today ... As a candidate for President of the United States and the definitive front runner in every poll, both nationally and state wide, including the just released poll in the state of Florida, Mr. Trump expects to be treated fairly. All you have to do is look at the tremendous ratings last night from the Late Show with Stephen Colbert, where Mr. Trump was the guest, or the ratings from both debates, to fully understand the facts.

So what's going to happen next? Will Donald Trump say more rude things on Twitter? Yes. Will Fox News continue to suck? Most definitely. Will they say sorry to each other? Hell naw. Will this suddenly be SO TWO WEEKS AGO in two weeks when Trump is back on the Fox News being eagerly blown by Sean Hannity and the "Fox & Friends" stooges? Ayup.

So that is why Donald Trump and Fox News are fighting. We know how you hate it when they fight.