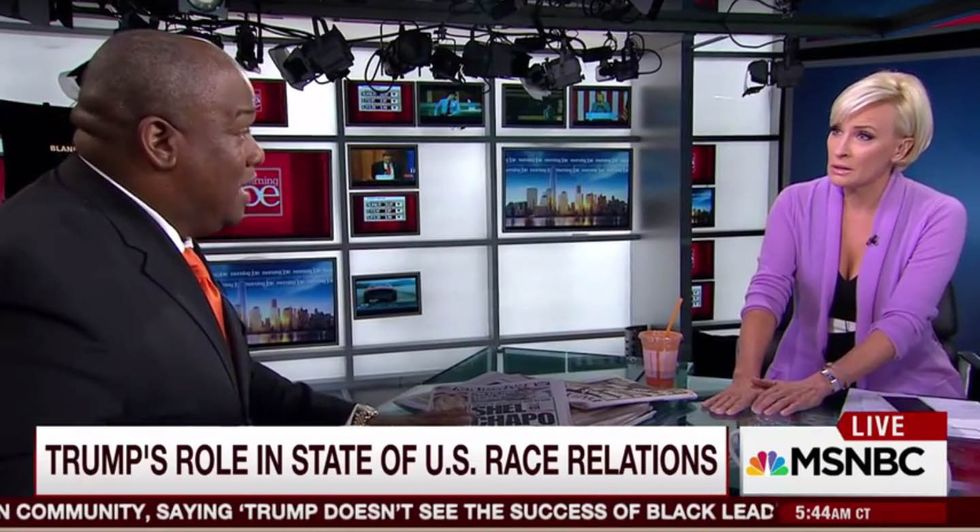 Mika Brzezinski had absolutely no time for Trumpkin nonsense on Friday's "Morning Joe." This could be because Joe Scarborough wasn't there to man-splain and defend Donald Trump like he's done for the past year, it could also just be a coincidence, or that Hillary Clinton was scheduled for an interview later. It could also just be that was 6:00 AM. Who knows?

The Morning Joe round table was laying into Trump for being genuinely racist over the past few days. Al Shaprton led off saying Trump was pandering to white nationalists and just playing presidential dress-up, or LARPing, or something, because years earlier Trump came to Sharpton's National Action Network convention with Geraldine Ferraro. There's even pictures to prove it! Then, after a supercut of Trump being all, "BOO, Hillary Clinton's a lazy bigot, BOO," Brzeinski eyeballs the camera and cuts the through the bullshit, kind of like how Scarborough does from time to time but with actual emotion.

Mika going on a quick tirade is nothing new on "Morning Joe," but without Scarborough there to remind everyone that rich white Republican men run things, the flood gates opened for the rest of the round table to just pour out the boiling pot of loathing for Trump that had been simmering on MSNBC's hot plate.

About 30 minutes later, during an interview with Trumpkin Pastor Mark Burns, Brzeinski went into full lady-splain mode, and point blank asked Burns if he thought Trump was a racist.

Mika Brzezinski: ...When he made the comments about the judge saying he was Mexican, was that racist or not? I just want to know if that is racist or not. I need to know where you stand on things in terms of reality. So, were those comments racist or not?

Pastor Mark Burns: I think it’s important to understand. I think if I was in Mr. Trump’s shoes and I had a very controversial policy that offended many millions of, potentially millions of Hispanic people…

Mika Brzezinski: You know he was born in America -- were the comments racist or not?

Pastor Mark Burns: Let me finish my statement or not.

Pastor Mark Burns: Let me give you my answer the way I would give it to you so we can move forward. We’re telling the story.

Mika Brzezinski: But it’s yes or no.

And that's about the time that Al Shaprton and Mark Burns get into a full on black off. Burns insists Trump has policies, like education, to help lift African-Americans out of poverty (even if Trump has never said what those policies are). Al Sharpton wants to know where they are because Trump sure as hell doesn't know where they are. Burns, however, is SURE that Trump's education policies would be something like charter schools because the president has no authority over schools.

AL SHARPTON: Donald Trump therefore is saying that as president of the United States, who would be over the Department of Education's answer, is outside of the public school system. He is over the public school system...Donald Trump has not come forth with an education policy...He sat up and pandered to you. Fine, that's good. That's not a policy.

Sharpton and Burns went back and forth, with Burns trying to dodge answering any sort of policy specific question, just defaulting to the assumption that he knows Trump has a policy because he's met Donald Trump, and Burns has spiritual belief that Trump has a policy to help the African-American community. As if things weren't going bad enough, Burns then took this trainwreck of an interview right off a burning trestle by saying something about the sanctity of life, and Donald Trump will be guided by the ghosts of all the aborted babies, and are you trying to say the spirits of dead babies are wrong, because Jesus wouldn't let that happen! Or at least that's what it sounded like to us. Darned if we're going to listen to it more than once.

Mika then tried one last time to get Burns to say something other than a Jesus-filled word salad full of broken sentence croutons by asking Burns if he believes Trump's statement that Hillary Clinton is a big ol' stamina-impaired bigot, and things went about as well as you'd expect.

In the smoldering ashes of Morning Joe, Trump took to Twitter to praise Burns and demand an apology from mean Mika. Sad!