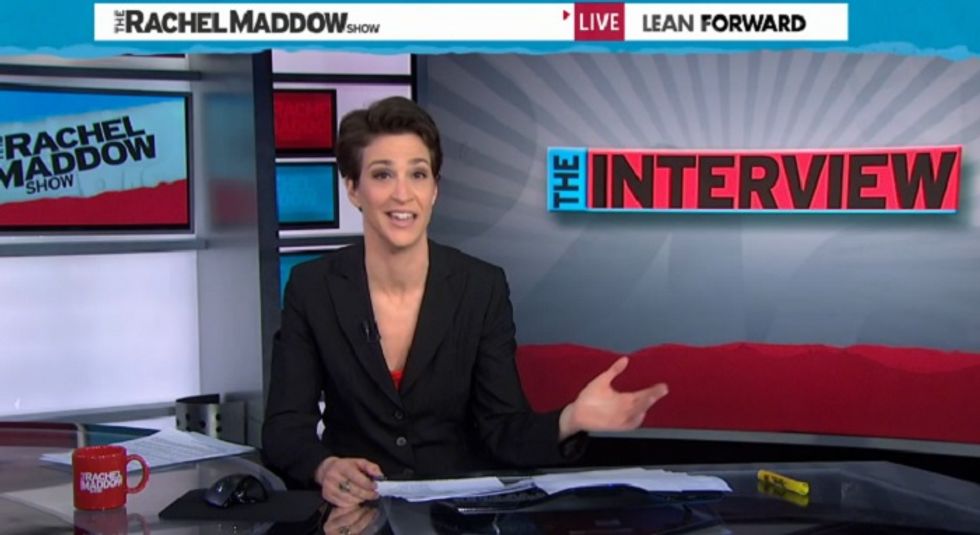 A goodly chunk of the Rachel Maddow Show Thursday was devoted to an exclusive story on the John Ensign sex scandal and its fallout, much of which had been hidden away in Justice Department records. You see, Ensign, Nevada's "other" Senator until his abrupt resignation in 2011, wasn't merely a family-values horndog who was sexing a staffer. His lover's husband, Doug Hampton, was also an Ensign staffer, and once the affair ended in 2009, Ensign tried to make things better by getting Hampton a job as a lobbyist -- which violated federal laws. Guess which one of the two ended up getting prosecuted for that? Hint: It was not the disgraced Senator, who now plies his trade as a veterinarian in Las Vegas. Hampton pleaded guilty, and Ensign went back to giving shots to poodles.

[contextly_sidebar id="52jxzJrAORf5kPUwT6qYvVrDGWleIVre"]Maddow said in her teaser for the piece that, thanks to a lawsuit forcing the Justice Department to release documents in the case, "One of the most inexplicable political scandals of the past decade is finally, finally getting...explicked." And is it ever. There's a whole cast of rightwing politicians -- Rick Santorum and Tom Coburn among them -- who we now know were initially trying to get Ensign to stop the affair, and then trying to run as far as they could from being tainted by his taint. As for Hampton, he largely got left to twist in the wind. Even though the Senate Ethics Committee recommended that Ensign be prosecuted for arranging the lobbying job, the Justice Department elected not to, a decision that remains unexplicked.

Two videos here: The history of the Ensign scandal, and of how it all unraveled, is just plain fascinating, and Rachel is in fine "powerful asshole gets caught doin' a crime" (on top of plain old hypocrisy) mode. She also has an interview with Hampton, who adds details about just how nice his former friend Ensign was.