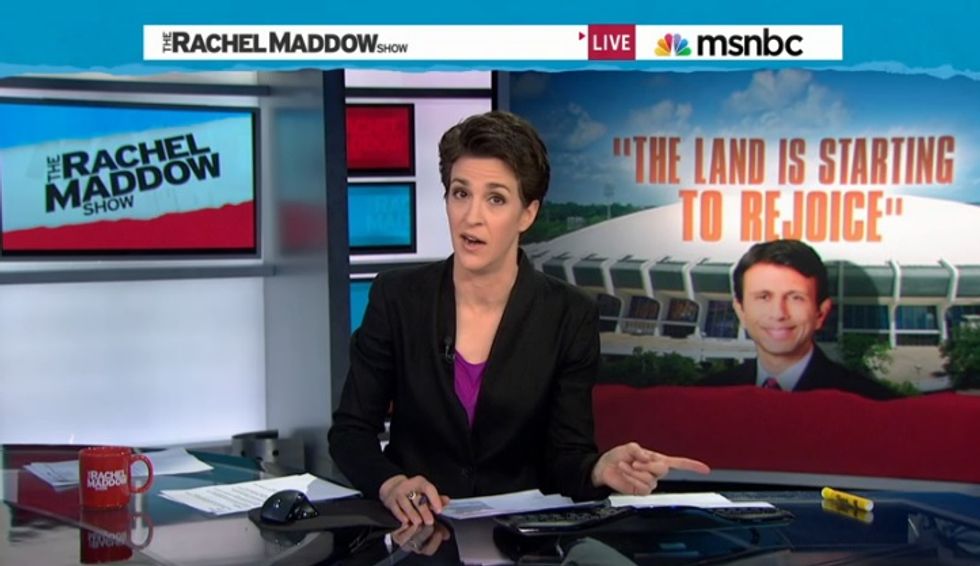 Rachel Maddow Show led off Friday's show with an unforgettable look at Cindy Jacobs, the self-proclaimed Texas prophet who God regularly warns about any number of tragedies -- mass shootings, political coups, and so on -- which she then prevents or at least reduces the severity of through the power of prayer. Wonkette readers may recall that Ms. Jacobs successfully headed off an assassination attempt against Ronald Reagan (it was just a different one from Hinkley's), because her son had a tummyache. She was only the most flamboyant of several wingnutty faith healers and snake handlers (OK, not literally) headlining Bobby Jindal's Great Big Prayer rally in Louisiana this weekend; the event was a pretty direct retread of a similar rally held by Rick Perry four years ago, and the early versions of its publicity materials even referred to "recent" events like Hurricane Katrina.

This is pretty incredible video. Our favorite part is the bit where Jacobs speculates that maybe the end of the "Don't Ask Don't Tell" policy may have caused birds to fall dead from the skies over Arkansas, because Bill Clinton was from Arkansas, and so were the dead birds. Signs and wonders, my friends. Signs and wonders.

Also, too, in a rare during-the-show communication, Bobby Jindal's office contacted the Maddow Show to clarify that the prayer rally was not a political event, no no no no no. It was just a chance for people to pray for America. With a potential 2016 candidate. In a nonpolitical setting. For America.