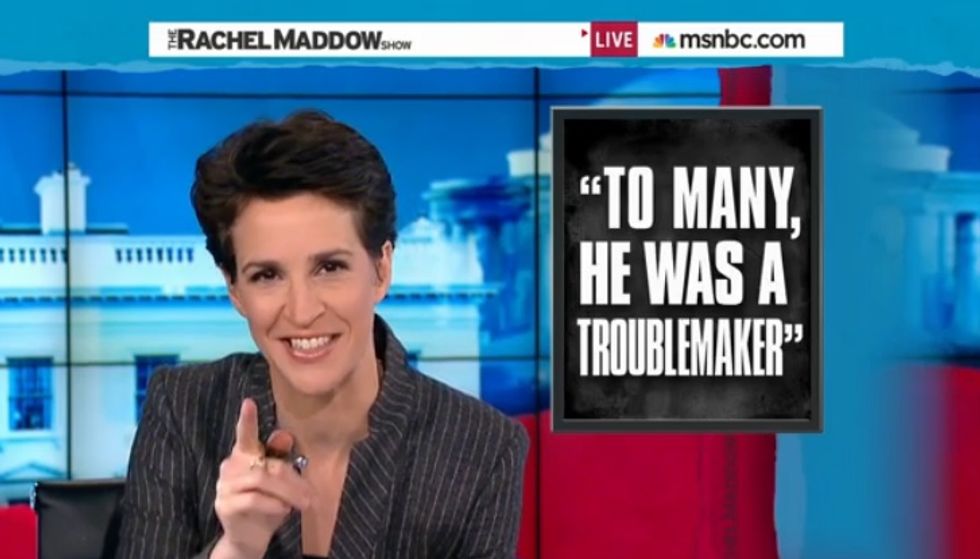 On a day when many rightwingers now claim that Martin Luther King really agreed with them, Rachel Maddow takes us back to 1983, when the right was at least honest about their feelings toward King: They considered him a communist who wasn't worth a national holiday. Ronald Reagan only reluctantly came to accept a King holiday as inevitable, and after deciding to sign a bill declaring a federal holiday, had to call Coretta Scott King to apologize for writing a letter to a John Birch Society leader saying he shared the Bircher's reservations about a King holiday, and that popular sentiment for King was "based on an image, not reality." Reagan made that call shortly before visiting Augusta National Golf Course, which at the time allowed only white members, a policy it didn't reverse until 1990. Imagine that. Mrs. King accepted the apology, and then later that weekend Reagan oversaw the invasion of Grenada in his pajamas:

Maddow notes that this photo is her laptop's screensaver. Asked if he agreed with Jesse Helms that King had communist associations, Reagan only said, "We'll know in about 35 years." But after all the resistance from conservatives who insisted that King was unworthy of national recognition, Reagan eventually signed the bill, and reluctantly allowed King to be thought of as a hero. What a swell guy that Ronald Reagan was.

Six members of Congress who voted against the national King holiday are still in office. And then there's Steve Scalise, who voted against a Louisiana holiday recognizing King as recently as 2004, although he probably had very good, fiscally conservative reasons for that, no disrespect meant.

And while we're at it, let's keep in mind that the Supreme Court is on the verge of gutting yet another achievement of the Civil Rights movement: the Fair Housing Act, passed shortly after King's assassination.

For reasons known only to MSNBC, the first segment of Monday's Maddow show was chopped into four chunks; here's the last of them, Maddow's interview with Homeland Security Secretary Jeh Johnson, on the truly revolutionary legacy of Martin Luther King and the continuing struggle for justice: