Morning Maddow: Tom Coburn Will Let Veterans Die To Teach Us All A Lesson About Big Government 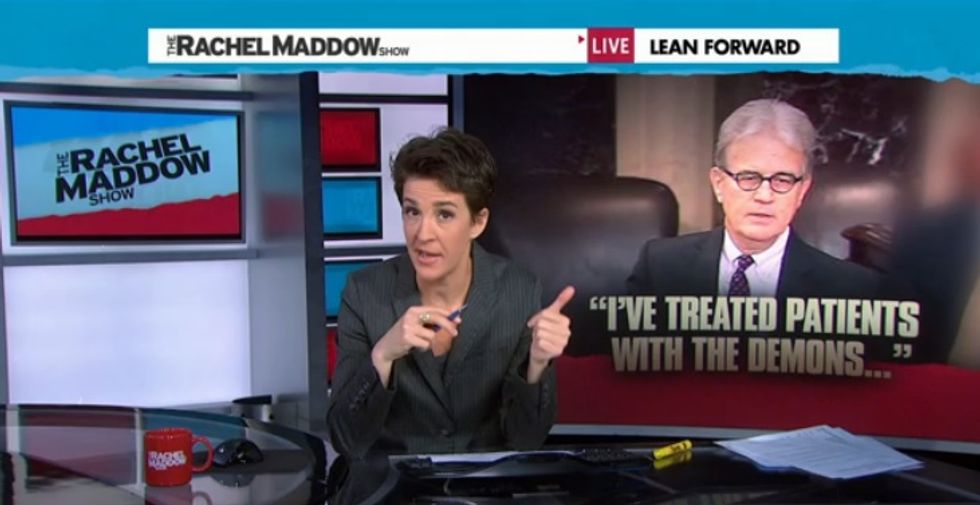 Monday, we brought you the strange tale of Oklahoma Sen. Tom Coburn's strange opposition to the Clay Hunt Suicide Prevention for American Veterans (SAV) Act. He says it's because the bill duplicates services that already exist and its $22 million cost (over five years) would somehow break the budget. On the whole, though, it's looking more and more as if Coburn is simply kind of a dick, and he wants his final act as a U.S. senator to be this illogical opposition to a bill that would get more counseling services to veterans.

As Rachel Maddow says, maybe we should have seen this coming. After all, Tom Coburn is the guy who earlier this year fought against a new VA hospital in Tulsa because vets didn't need a "Taj Mahal." Sure, a hospital was needed, but damned if the taxpayers should have to pay for anything too nice.

Just after the Senate confirmed Vivek Murthy as surgeon general Monday night, Coburn took to the Senate floor to explain his opposition to the bill. And it didn't make a lick of sense. Mostly, he felt that the VA hadn't been punished enough for its delays in treating vets last summer, so Coburn felt he had to take a principled stand ... in favor of letting vets kill themselves? Did we mention that this guy is a doctor?

Despite that, Coburn really cares about vets, because honor and duty and his grandfather's WW I medal, but also a lot of other word salad that didn't begin to explain why he was blocking the bill, which will certainly pass in the new congressional term anyway once Tom Coburn has retired. Prepare to grind your teeth as you watch.