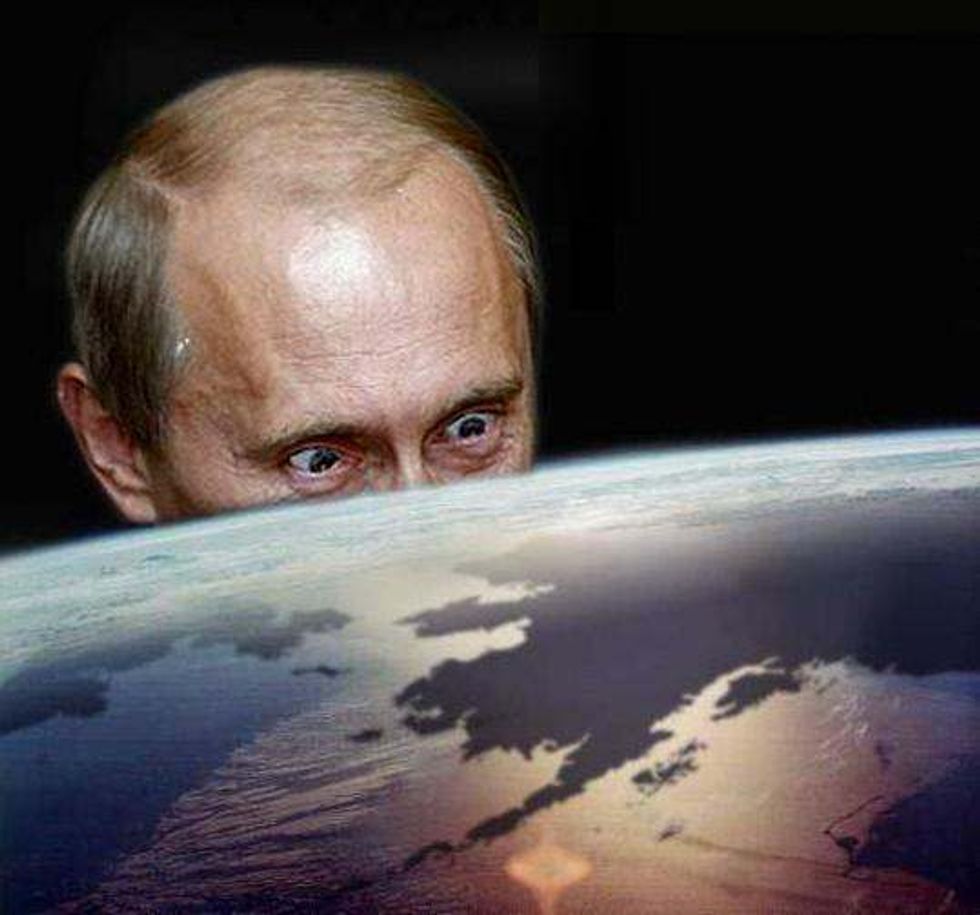 Vladimir can have "I voted" sticker?

There is a new WHOA IF TRUE investigative report out this morning, a Newsweek cover story from reporter Kurt Eichenwald, about "Why Vladimir Putin's Russia Is Backing Trump." It builds on a lot that has been reported by others, about the extent of Russia's hacking campaign to influence the American election in favor of Donald Trump. You'll remember that Mother Jones's David Corn published an explosive report this week that claims Russia has literally been cultivating Trump as an asset for YEARS. We don't know who Eichenwald's sources are, so we have to take all this with a grain of salt, but if his sources are indeed good and pure and true, then it adds to the very weird mosaic of the Kremlin's unprecedented interference in our election.

One surprising claim from Eichenwald's piece is that, though Russia has obviously been hacking and doing a propaganda operation in support of Trump (and against Hillary Clinton, whom Putin reportedly despises), there have been times when the Kremlin got a wee bit worried about their boy Trump, like back in August, when he repeatedly attacked Khizr and Ghazala Khan, the Muslim couple whose son died in service to the American military:

Trump’s behavior ... has at times concerned the Russians, leading them to revise their hacking and disinformation strategy. For example, when Trump launched into an inexplicable attack on the parents of a Muslim-American soldier who died in combat, the Kremlin assumed the Republican nominee was showing himself psychologically unfit to be president and would be forced by his party to withdraw from the race. As a result, Moscow put its hacking campaign temporarily on hold, ending the distribution of documents until Trump stabilized, both personally and in the polls, according to reports provided to Western intelligence.

"Secret Trump asset go too far, appear to be unstable like Russian mole-rat!"

This obviously happened because, LOL, Russia does not understand idiot Trump supporters at all. Of course, Trump's polling numbers stabilized and Russia got back to hackin' and releasin' propaganda.

At this point, according to Eichenwald, the operation was creating divisions within the Kremlin, with some officials being like "Whoa hey nyet means nyet! Russian campaign to destroy America not progressing as planned!" Prime Minister Dmitri Medvedev has reportedly been unhappy with it, and others in Russian government have lost their jobs.

By October, “buyer’s remorse” had set in at the Kremlin, according to a report obtained by Western counterintelligence. Russia came to see Trump as too unpredictable and feared that, should he win, the Kremlin would not be able to rely on him or even anticipate his actions.

Eichenwald reports that Putin is OK with Hillary winning, as he believes she will be so "bogged down trying to heal divisions within the United States" caused by the Russian disinformation campaign, that she won't be able to get in his way all that much. (We'd note that Putin must be THRILLED that the FBI has become a rogue agency, as factions inside the bureau appear to be trying to do the same thing to Hillary as Putin has. Yay America!)

There's other fun stuff in Eichenwald's piece too! One thing that jumped out at us seems to confirm David Corn's report that Russian intelligence has been compiling dossiers on both Hillary Clinton and Donald Trump for YEARS. Corn shared a memo that claimed Russia had "compromised" Trump during one of his visits to Moscow, and could therefore "blackmail" him. Eichenwald's piece bears that out, saying "the Kremlin ... has both video and audio recordings of Trump in a kompromat file," while noting that Newsweek isn't sure how compromising it is. Hey, remember after Corn's piece came out, all the intelligence community on Twitter started a-fluttering about a rumored TRUMP ORGY RUSSIA SEX TAPE? This could be that.

Eichenwald also claims the Russian hacking is even more extensive than many know:

HAHA, that parenthetical! Maybe Hillary used a private email server because SHE'S BRILLIANT AT FIGHTING RUSSIANS! (Nah, but it's an interesting thing!)

Anyway, whatever the extent of Russia's real influence over this election, whether it's a disinformation operation to delegitimize free and fair American elections, or whether Russia has actually been actively using Trump as its pawn -- like when Trump reads Russian propaganda onstage at campaign rallies, HAHA! -- Eichenwald says it's enough that all of our NATO allies are freaked the fucked out. They're especially bothered by how Trump absolutely refuses to acknowledge that Russia is behind all this, and says, "[o]fficials in Western Europe say they are dismayed that they now feel compelled to gather intelligence on a man" who could become our president. Yep, our allies are having to spy on Trump, you know, just in case.

Like we said, there is a lot of WHOA IF TRUE in Eichenwald's piece, but it's worth a read, so go do that while you wait in line to early vote for Hillary Clinton, please for the love of God, GO RIGHT NOW.