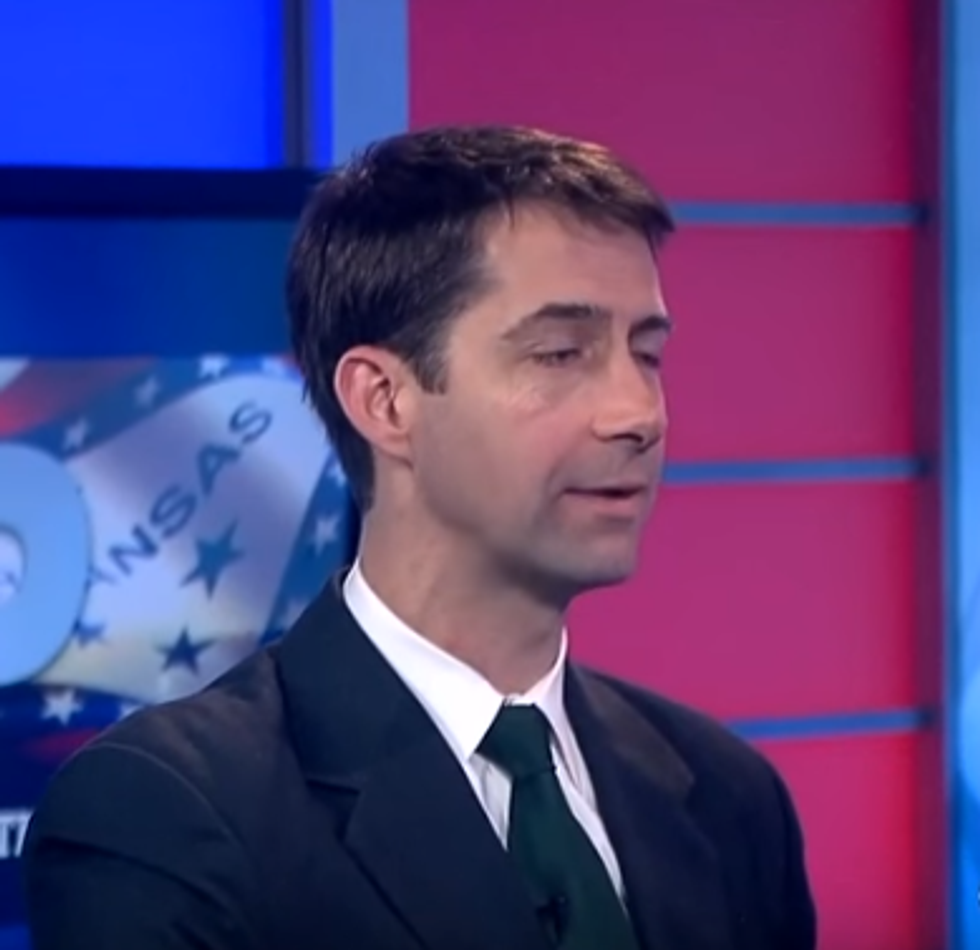 Y'all, the child senator from Arkansas, Tom Cotton, is mad enough to tittyfuck a swallow right now! Surprise, it has to do with how Cotton still thinks he's the president of Obama's Iran foreign policy. Surprise, Tom Cotton is being a goddamned moron again.

It all started when mean White House Press Secretary Josh Earnest maded fun of him, during a press briefing:

“Sen. Cotton is certainly no expert when it comes to heavy water. I’m confident that he couldn’t differentiate heavy water from sparkling water,” Earnest said.

LOL! So if you don't know what this is about, "heavy water" is a thing used in making nukes. As part of the Iranian nukes deal, the nation is supposed to dispose of a shitload of its "heavy water," and according to Reuters, it's allowed to sell it. So hey, the US and A is here to help! Barry O'Bama will buy $8.6 million moneys worth of "heavy water," and Iran will get a few moneys in its pocket to use for Girl Scout cookies or whatever they're allowed to buy under the terms of the deal.

So basically Josh Earnest was saying "Shut your yaphole, Senator Babycakes. You don't even know what 'heavy water' is, DUMBASS."

So of course, this made Sen. Cotton GRRRR ANGRY, so he pulled his thumbs out of his asshole long enough to Tweeter about it:

OK fine, the "sparkling water" comment was kind of corny and Wonkette would have said it better (see above), but OH WAIT HE'S STILL MAD:

OOH NOW THAT IS A SICK BURN. Tom Cotton went to "Army." He got lots of stuff at "Army." He got some pants and some guns and got to make shooty shooty at Iraq and Afghanistan, when he was at "Army." Josh Earnest wouldn't know about all the cool stuff you get at "Army," because Josh Earnest is obviously a fag.

Hey, know who ELSE got really cool stuff in "Army"?

To be fair, it sounds like Tom Cotton was really good at "Army," if you read his bio. Too bad he's such a pussy when it comes to being a United States Senator.