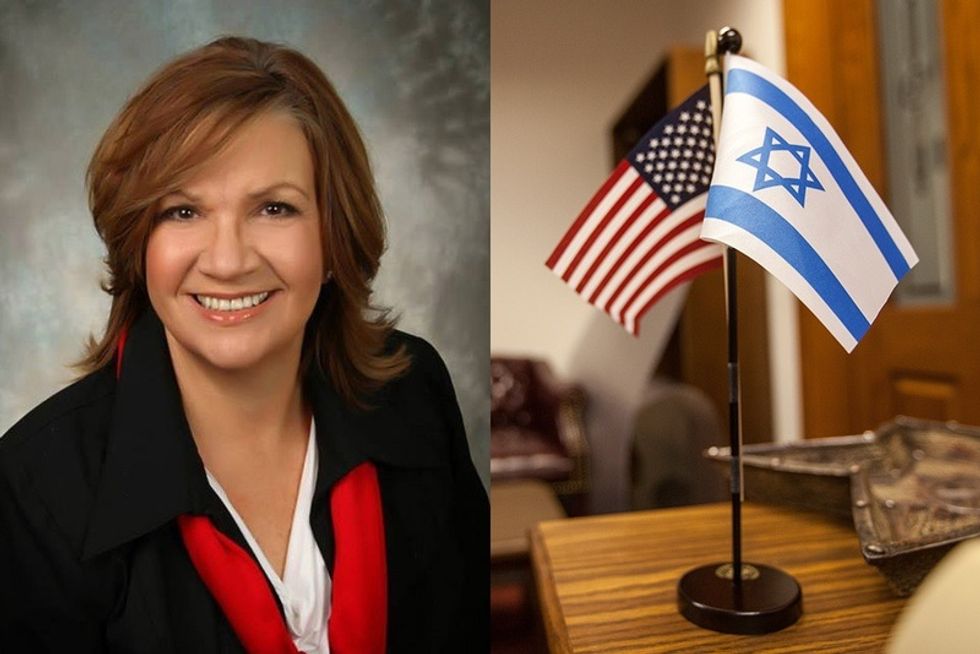 Thursday was "Texas Muslim Capitol Day," an annual event held to encourage Muslim Texans to visit the state capitol in Austin and learn about state government and how to meet with lawmakers and such. Which means, of course, that a few Patriotic TexAmericans decided that the Muslims were taking over the Capitol so they can CRAM SHARIA LAW DOWN ARE THROATS!!!1!! There were angry protestors out on the statehouse lawn, and state Rep. Molly White left this important message on her FacePlaceSpace:

She seems nice! It was unclear whether the Muslim visitors were supposed to also pledge support for Israel, or if the Israeli flag was supposed to scare them away like garlic would keep away a vampire, or what. RedState editor Erick Erickson tweeted that White's stunt was simply "AWESOME AWESOME AWESOME."

Ms. White is very worried about the imminent takeover of Texas by Sharia, of course, and as proof, reposted a RightWingNews article about a private, nonbinding, voluntary dispute-resolution group formed by some Texas Muslims. Basically, it appears to be a mediation service that references Sharia to resolve disputes. Or as Breitbart put it: 'VOLUNTARY' SHARIA TRIBUNAL IN TEXAS: THIS IS HOW IT STARTS. "It" apparently being a Muslim version of any number of faith-based dispute-resolution services, like for instance, the million or so results we got in a google search for "Christian dispute resolution."

Well by God (NOT "ALLAH"), Molly White is not going to sit back and let Shariah take over Texas! In her Facebook post about the article, she takes a firm stand:

This is why I support American Law for American Courts, especially in cases involving women, wives, children and parent-child relationships. Let me remind you that just because the judge in this article says words like voluntary, non binding, and tribunal doesn't mean he is telling the truth. Remember, in the Koran, it is ok to lie for the purpose of advancing Islam. Texans must never allow fringe groups of people to come here so that they can advance their own culture instead of becoming an American and assimilating into the American way of life. That, I can assure is not the intent of most Muslims who move to America.

Presumably, Ms. White, with her Israeli flag, is also against letting Orthodox Jews have their own quasi-judicial system governing some civil matters, although we doubt there were too many demonstrators waving around "No Halakha In America!" signs today.

That's how you stop creeping Sharia: by being the biggest creep possible. The Muslims then sang "The Star Spangled Banner," which prompted the 30 or so protestors to scream some more, including this incoherent retort captured by Texas Monthly editor Erica Greider:

Which is just plain silly, as it's well known that Twilight Sparkle is an agnostic.