My Goodness, Why Are We Being So Mean To That Nice Hope Hicks??? 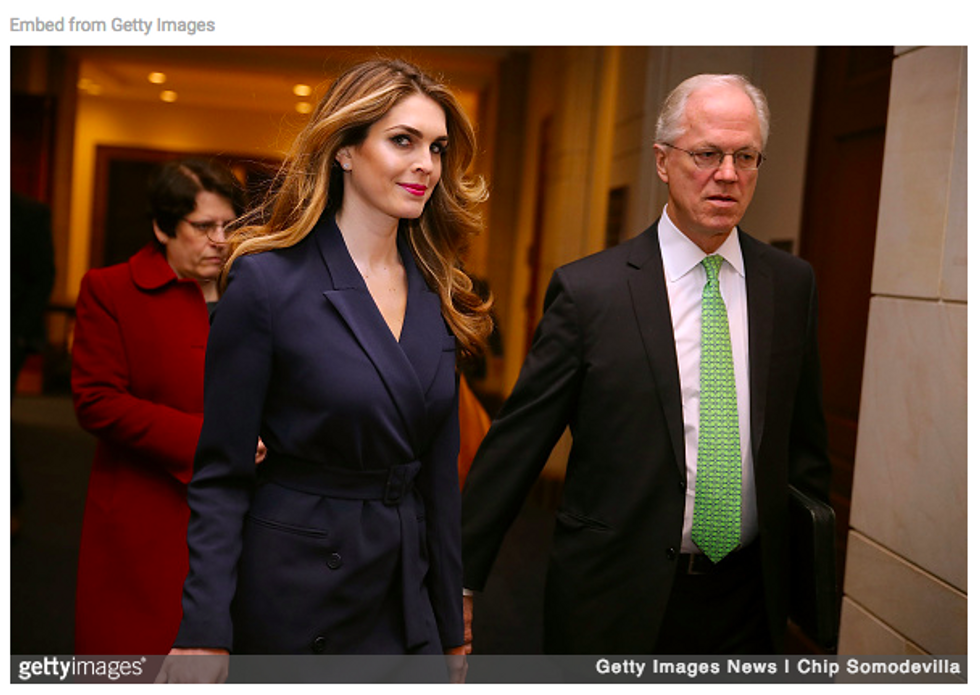 Being pretty means never having to say you're sorry. And Hope Hicks is very, very pretty. Last night's NYMag profile of Hicks by Olivia Nuzzi is hilarious -- Hope did not enjoy working in the White House "surrounded by eccentrics, maniacs, divas, and guys from the Republican National Committee who seemed to think they were managing a Best Buy in Kenosha" -- and deliciously gossipy, but it's not exactly holding Hope's stilettos to the fire. So instead of our usual Wonkette Seekrit Chatcave ritual where everyone murmurs, "Awwww, poor Hopey," only to have Yr FDF shout, "OMG! Shut up! Just 'cause she's pretty and white doesn't mean she's any less fucking guilty than the rest of those criminals," today's Hope piece is being written by the one writer at this here recipeblog who thinks that bitch needs to go straight to jail with the rest of 'em!

She may have obstructed justice, but gosh darnit, she's so sincere!

Hicks took out one of her notebooks, black leather with the Trump name embossed in gold on the front. She’d prayed a lot over the weekend, and also written two lists in the same bubbly print that had recently been photographed on a note card in Trump’s hand, reminding him to tell survivors of a school shooting, among other things, “I hear you.” One list contained reasons to resign as White House communications director immediately; the other, reasons to wait to resign. Not resigning at all wasn’t a consideration.

No, we are not getting sucked into the Dear Diary of a grown-ass woman who participated in destroying the country. It's the White House, not the fucking babysitters club. OR IT SHOULD BE.

Not that she's, like, concerned with icky politics or anything. Anyway, it sounds so sweet coming out of her pretty mouth!

To Hicks, the president’s policies were secondary considerations — the man himself came first. And at the end of the day, she really liked him. “Part of it is because of the proximity,” a source close to her said, “part of it is human nature.” She even sounded a little like him sometimes, uttering words like loser in her sugary voice.

And, yeah. She did stonewall a congressional investigation and admit to telling "White Lies" for her boss. But, how was she to know she'd have to testify for Congress when she agreed to work for the president?

She didn’t overanalyze her decision to join the campaign, thinking of it almost the way you’d think about a semester studying abroad. “The feeling was, You know what? I’m just going to roll with it. Let’s see what happens until the election,” a source who has known her since before the campaign told me. “She wasn’t someone who was in it for the politics. She was in it because of the person, and the relationship with the family, and the experience.”

Hope's just a girl in the world.

A girl who likes mints, and working out, and bakes cookies at Valentine's Day with handwritten notes saying, "Believe in Love." And if her messy personal life led to the unraveling of the White House, well oooopsie! Hey, don't blame poor Hopey with the good hair.

See it all started during the campaign when Hope, who has a soft spot for bad boys, aka dangerous fucking assholes, started dating campaign thug Corey Lewandowski. Pro tip: If you don't want people to shame you for dating a married guy, make sure to have long legs and impeccable brows.

So after Hope broke it off with Corey, and Her Real Daddy comforted her by calling her "the best piece of tail" old Corey would ever have, she took up with serial wifebeater Rob Porter. And this caused Lewandowski to lose his shit.

“He has, sort of, Single White Male characteristics,” a source who had worked with Hicks before the campaign told me. In the fall, he began asking around, trying to figure out whom she was dating. “I think that he thinks he should control her,” a second source said. “He got wind that she was dating Porter, and he could not handle that,” a third source, who is close to the White House and worked with Lewandowski, said. “There were still raw feelings.”

Was Lewandowski behind the media reports of Porter's violence towards his ex-wives? Maaaaybe! Lewandowski's pal Chuck Johnson doesn't know what he's "allowed to say" about the process by which David Martosko, formerly of the Daily Caller, came to publish the Porter story in The Daily Mail. But if the domestic violence story got Porter fired before morphing into a story about Porter's security clearance, which provoked the whole crisis over West Wing security clearances, which led to Javanka and all the rest of the goons losing their "temporary" clearances, which led to Peter Navarro sneaking back into the Oval Office to hawk his batshit trade theories, which led to a trade war, well ... can you blame poor, innocent Hope?

No. No, you can't. But no one gets to come out of this burning trash heap smelling like those pale-pink roses on Hope's desk. Not even Hope Fucking Hicks!

White Privilege, HOW DOES IT WORK?

The Mooch is "obsessed with astrology and the word fuck."

The president is really a champion of women, "especially if he’s not banging them. Because, like a lot of men but more so, Trump really does compartmentalize the sex and the emotional part."

After getting photographed making out in a cab with Rob Porter and having her sexxxxxy texts with the Mormon wifebeater leaked to her boss, Hope did finally come clean to Don McGahn about the relationship. And she tipped him off about her boyfriend's little problem with his ex-wives. Which he already knew, but whatever. Extra brownie points for Little Miss's candor, we guess?

Hope is Trump's TRUE DAUGHTER, unlike Ivanka who, "understands that her father is gonna be dead in ten years."

And the biggest fucking asshole in the West Wing, aside from The Asshole in Chief is ....

John Kelly! Yeah, shocker. Apparently, Kelly dictated that statement calling Porter "a man of true integrity" all by himself. When the media blamed Hicks for talking up her wifebeating boyfriend, Kelly let her take the fall for it. And for a moment, Yr FDF actually felt sorry for Hope.

Please click here to fund us! We need salaries and servers and a fucking bath after reading this stuff!